Carson’s has been a Chicago destination for baby back ribs since 1977. How did the restaurant—which now numbers four locations with its recent expansion to Milwaukee—develop a menu item that’s been a best seller since day one? 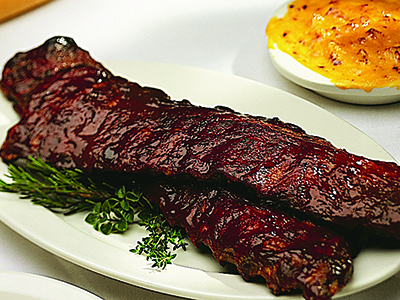 Start with the meat

“We have an incredibly tight spec for our baby backs,” says Dean Carson, president and owner. “The size is super-important. The whole rack of ribs must weigh 1.75 pounds so you get uniformity of cooking when you make hundreds at a time. The rack can only deviate by 1/10 of a pound.” Carson buys only domestic pork baby back ribs—nothing from Denmark, Canada or Mexico. He has to work with a couple of suppliers to get the quality and quantity he needs.

Carson’s most important differentiator: “We do not season the ribs in any way before cooking. No marinades, no brining, no dry rubs,” says the founder. “These are just euphemistic words for tenderizing.” Instead, the characteristic flavor comes from smoking the ribs in a Southern Pride smoker fueled with hickory wood. “The cook controls the time and temperature and we’ve developed a signature system to turn out consistently flavorful, tender baby backs,” Carson adds.

Carson’s proprietary tomato-based BBQ sauce is a blend of 15 ingredients created to appeal to personal taste—“tangy and only slightly sweet. No hot peppers, no mustard and no vinegar,” he states. It took more than a year to develop, is made in-house and has been the only one available—until now. “A hot version of our sauce is in the works. It’s based on the same flavor profile but we give it a little kick of heat.”

Another recent development at Carson’s is its online retail operation. The ribs are made according to the signature recipe and packed in cryovac to ship out to consumers. While many restaurants contract with an outside vendor for retail sales, “we rent out commercial kitchen space and have a fulltime employee dedicated to cooking and packing the ribs,” notes Carson.

Before Carson’s perfected its cooking technique, they tried par-boiling the ribs and baking them in sauce. Neither method met expectations. Meatier St. Louis-style ribs were also given a trial run “but I don’t consider them the best of the best,” Carson claims. The baby backs won out, as did smoked bone-in pork chops and chicken—two other customer favorites.