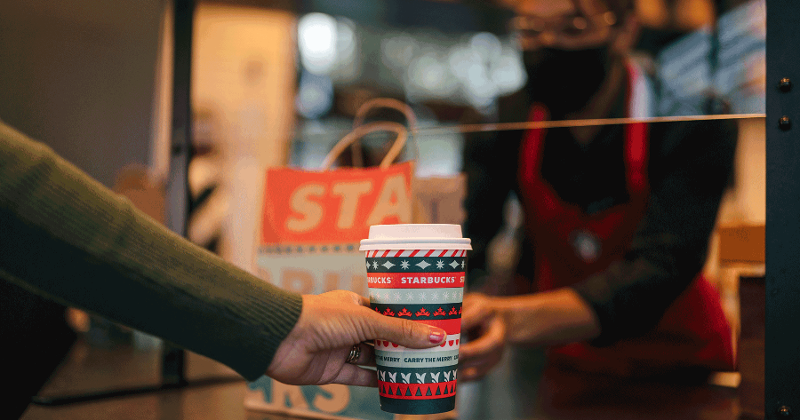 Nearly all of Starbucks’ efforts these days appear to be focused on the takeout customer. The company is adding more drive-thrus and pickup stores and taking steps to improve speed of service as business shifted even more dramatically toward customers who take their coffee with them.

But the company’s executives also believe the experiential customer that defined much of Starbucks’ growth in the past—its so-called “third place” —will come back once the pandemic is over.

“As we started opening limited seating in our stores with very limited seating, it was immediate,” CEO Kevin Johnson told investors on Wednesday. “Customers were there. They want to be part of that community.

“The social recession has affected everyone on this planet, and Starbucks is and will become destination No. 1 for community, in my opinion. We are positioned to do that and do that well.”

Indeed, the Seattle-based coffee giant is focused on its in-store experience, making its locations as much of a coffee theater as anything. For instance, is has a “Phantom” brewer that enables baristas to make one of four espresso offerings. But it also removes the large box, “allowing customers to enjoy the brewing process with their barista,” Roz Brewer, chief operating officer, said on Wednesday.

Starbucks is also coming out this spring with what it calls a “Shaken Iced Espresso” made with espresso, brown sugar and oat milk that is “shaken to a smooth velvety finish,” Brewer said. She noted that younger consumers are twice as likely to drink cold coffee. “That’s great news as cold beverages have driven more than $1 billion in sales the last three years,” she said.

Still, the company is intent on developing a more takeout-oriented business. Starbucks is at the outset of a significant transition of its U.S. store base away from traditional shops and more toward drive-thru and takeout units.

Currently, executives said, 65% of Starbucks’ U.S. locations are traditional units while 35% have a drive-thru.

By 2023, 45% of the company’s units are expected to feature a drive-thru, executives said. Many of the 800 locations Starbucks plans to open every year, most of them in suburban areas, will have such a lane.

“Though we are growing off a large base, there is ample room to expand in regions where the Starbucks brand is less penetrated, with particular focus on high-volume, high-margin suburban drive-thrus,” Brewer said.

Those drive-thrus could feature double lanes—and so Starbucks will join the growing number of fast-food chains that employ dual lanes—while workers will also use hand-held devices to serve customers.

Because more of its customers are coming through the drive-thru, Starbucks is planning to improve service to reduce complexity. Brewer said the company plans to simplify its products and invest in warming ovens and other equipment that will free time for workers to “focus on customers.”

Starbucks also has an artificial intelligence engine that will provide customers with product suggestions specific to the store, weather, time of day and “available inventory.” In the future, Brewer said, the system will make more suggestions on how their drink should be made.

The company hopes that this system will help drive more use from its loyalty customers, now numbering more than 19 million active users who drive almost half of the chain’s revenue, executives said.

“The more we leverage AI and deepen our digital relationships, the more we can drive frequency,” Brewer said. “We have a golden opportunity to architect experiences to surprise and delight our customers.”