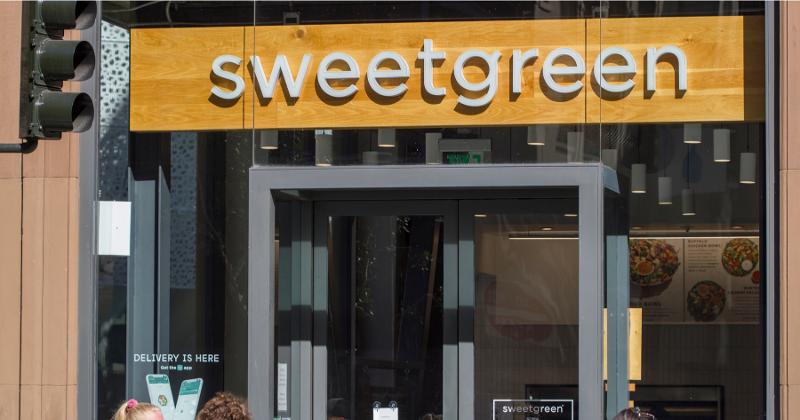 Shares of Sweetgreen rocketed Thursday, on the fast casual’s first day of trading, closing at more than 76% above the chain’s starting price.

Sweetgreen set its stock price at $28 late Wednesday—$3 higher than its previously stated range—as it prepared to go public on the New York Stock Exchange, trading under the ticker symbol SG. It opened at $52 a share and ended the day at $49.50. At one point, Sweetgreen was trading at a high of $56.20, a gain of more than 100%.

The brand raised $364 million in its initial public offering, selling 13 million shares. That’s about $89 million more than the projected IPO amount for the middle of Sweetgreen’s previous pricing range of $23 to $25 per share.

The performance gives Sweetgreen a market capitalization of $5.3 billion.

The chain, which was founded 14 years ago by three recent college graduates, has yet to become profitable. Its founders have said they’ve been building out Sweetgreen’s infrastructure on the road to profitability.

“We believe we’re at the very early stages of our growth,” co-founder Jonathan Neman told CNBC Thursday. “There’s such massive white space for what we’re doing … We’d like to build the McDonald’s of our generation. Eventually, we’d like to be everywhere.”

Neman told Yahoo Finance Thursday that all 5,000 of Sweetgreen’s employees had received a tenure-based “equity grant” as a sign of the company’s gratitude for their efforts.

In its financial filings, the 140-unit chain has said it intends to double its unit count over the next three to five years, while also investing in technology.

The chain reported a restaurant-level profit margin of 12% for the year, on average unit volumes of $2.5 million. That’s a drop from 2019, when Sweetgreen reported margins of 16%, with $3 million AUVs. The pandemic hit the brand hard, with its many urban locations built to serve lunch to downtown office workers quieted.

“Nicholas Jammet, Nathaniel Ru and I founded Sweetgreen in 2007 because we wanted to solve a problem in our own lives,” Neman wrote on LinkedIn Thursday. “We were three college students who were simply looking for a healthier way to eat … Our vision is to be as ubiquitous as traditional fast food but with the transparency and quality that customers increasingly expect.”

The performance comes as investors have snapped up shares of newly public restaurant chains after their debuts. Dutch Bros Coffee, Portillo's and First Watch all had successful IPOs. With the Sweetgreen result that sets the stage for future offerings, including Panera Brands and Fogo de Chao, both of which are planning to go public.