Ninety-five percent of customers who book a restaurant table show up to dine. That leaves five percent who don’t. For some restaurants—particularly high-end small-format houses—those people are a problem. That’s why, instead of taking reservations, some are using ticketing systems whereby consumers purchase a ticket to dine days or weeks before they visit the restaurant. 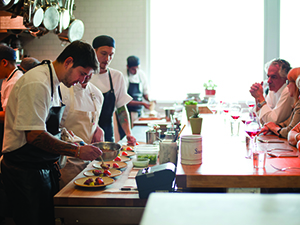 “We need to know exactly who is coming in,” says Krissy Lefebvre, director of marketing for Trois Mec in Los Angeles. The restaurant has used ticketing since it opened last spring because it has only 28 seats, and a cancellation by a table of four could mean the loss of around 15 percent of a night’s revenue. “[Over the long run], that would potentially put us out of business,” says Lefebvre.

Nick Kokonas and Grant Achatz caused a stir in 2011 when they opened Next (the follow up to Michelin-starred Alinea) in Chicago with ticketing only. The goal was to eliminate no shows and to provide transparency about what tables were available and when. “All the unknowns are gone,” says Kokonas. “If the food costs are more certain, we can buy better quality ingredients or put the money elsewhere.” That’s an advantage for the consumer in the long run, he adds. Another plus: “It takes away that awkward check dance at the end of meal, because it’s all prepaid,” Kokonas says.

Ticketing has been such a success at Next that Kokonas and Achatz implemented a similar system at Aviary, their upscale cocktail bar. In the past six months, the number of customers ordering the tasting menus at the Aviary has grown from 12 percent to 38 percent, Kokonas says. Nightly guest counts have risen significantly too, and check average is up 48 percent.

Saison in San Francisco tried ticketing when it first opened in 2009, and the lack of a postprandial transaction was one of the upsides. “We really enjoyed the fact that [customers] didn’t get a bill as the last memory in the restaurant,” says owner and chef Joshua Skenes. “It’s more attractive in a sense of hospitality.”

Ticketing hasn’t worked out since then for Saison; Skenes switched to standard reservations because the ticketing system’s software was not user-friendly and had too many steps for the guest. But ticketing’s not off the menu for good. Skenes is hoping to get a new ticketing system up and running. Ideally, he says, guests will have “two clicks, and they are done.”

Besides the guest experience and knowing the nightly cover count, the other attraction of ticketing is zero waste, says Trois Mec’s Lefebvre. “It allows us to keep our prices at an acceptable rate. If we had to worry about filling tables at the last minute, we’d probably have to increase our prices by at least 20 percent.”

A full house, especially in a small only expenses but the experience. “If you have an empty table, it changes the mood of the room. We consider Trois Mec to be a dining experience, so it’s important,” says Lefebvre.

Ticketing does have its detractors. “I believe in the crazy thing of actually trusting the customer,” says Howard Cannon, a consultant with Restaurant Expert Witness in Birmingham, Ala. “When you do ticketing, you’re causing the customer hassle up front ... So you’re irritating 95 percent of people because 5 percent aren’t showing up.”

There’s another downside, too, Cannon says. Consumer expectations are higher if they prepay for a ticket. It’s harder for the restaurant to live up to those expectations, which might result in fewer repeat customers. “You’ve changed the expectation of the consumer which, I think, has put you at the disadvantage,” he says.

The detractors don’t worry those restaurants that are using ticketing. “It’s the business model we’ve chosen that allows us to best operate and provide this service,” Lefebvre says. “We realize this may be a limiting factor for some potential customers, but for us, it is what works best.” At Next, guests love it. “Almost universally, our customers understand it and welcome the opportunity to ... see the [table] inventory, choose the table and pay quickly,” says Kokonos.

“Ticketing can turn some off,” says Traci Allen, CEO of Traci Allen, Inc., a brand development firm in Washington, D.C. “But they are probably the people who wouldn’t have gone to that restaurant to begin with.”

She thinks we’ll eventually see ticketing used in casual and upscale dining, especially restaurants that are trendy, have limited seating capacity and are destination restaurants or touristy venues. “They can use their ticketing policy as a way to positively promote their brand and increase their value,” Allen says. “Now there is the perception that this restaurant uses ticketing because of its unique appeal, and this policy enhances the value of the restaurant to the [guest].”

Kokonas sees ticketing catching on at middle- to high-end restaurants in the next five years, and he even sees it working for QSRs. “Customers prebuy and the restaurant doesn’t have to worry about yield management, so it can take that money and offer a better product with no waste.”

How The Aviary does it

Nick Kokonas and Grant Achatz use a variation of ticketing at The Aviary, their upscale cocktail bar in Chicago. There, 50 percent of seats are booked through ticketing, leaving the other half for walk-ins. Buyers have three options: