Papa John Schnatter seemed out for blood in his public caning last Tuesday of the team now running his restaurant brainchild, Papa John’s Pizza. But the screed posted on SeekingAlpha.com was a mere tsk-tsk compared to the tantrum a fellow Kentuckian threw when he visited a unit of his creation, the chain now known as KFC, back in 1976.

A famous New York Times food writer, Mimi Sheraton, had goaded Col. Harland Sanders into visiting the branch in the Manhattan neighborhood where she lived. The normally proper Southern gent nearly sullied his trademark white suit over what he found. As Sheraton took notes for the story her paper would run the next day, Sanders blasted the chicken as the worst he’d ever had, and likened the gravy to wallpaper paste that morphs into sludge when poured atop the mashed potatoes, which he refused to even taste. He was no fonder of the coleslaw. Never mind that the octogenarian had sold his baby 12 years earlier.

“I'm sorry I sold it back in 1964,” Sanders told Sheraton “It would have been smaller now, but a lot better.”

The tirades from Schnatter and Sanders are hashmarks in the long timeline of chain founders turning on the corporate teams that inherited their passion projects. To be sure, the outbursts are far offset by the silence most founders maintain after parting with their ventures. When was the last time Ritch Allison and his team at Domino’s were publicly excoriated by Tom Monaghan? Anyone recall a recent Paul Fleming fit over the direction of P.F. Chang’s or Fleming’s? And what is Chipotle’s Steve Ells even doing these days?

The philosophy of let go and move on seems to prevail, as evidenced by George McKerrow (LongHorn Steakhouse), Alan Stillman (TGI Friday’s), Sandy Beall (Ruby Tuesday), the trio of Chris Sullivan, Bob Basham and Tim Gannon (Outback Steakhouse) and a host of others. But, oh, those exceptions. Here are a few of the eruptions that made hockey fights seem like high teas.

Karcher started his empire with a hot dog cart and $326 in cash, $311 of it from a loan taken against his old Plymouth. But his wealth-management skills weren’t up to his acumen as an entrepreneur. In the late 1980s and early ‘90s, he ran into financial trouble because of some bad real estate investments. He defaulted on $30 million in personal loans, which were secured in part by his 34% stake in Carl’s Jr.’s parent company, where he served as chairman.

Insiders said Karcher had trouble understanding why his company, by then publicly owned, couldn’t be managed in a way that would bail him out. He was voted out by his own board in 1993 after paying a fine to the SEC of $664,000 for alleged insider trading. Offended and outraged, he raised a very public ruckus about how his successors at the helm were treating him and his creation, an iconic brand in southern California. Karcher would call into afternoon talk-radio shows, where he often found a sympathetic audience in his fight against what he branded as “turncoats.” He portrayed himself as a scrappy David being stomped by a corporate Goliath, a story that resonated among Californians who had grown up on Carl’s Jr. and knew the early chapters of Karcher’s story. Karcher’s usual target was Don Doyle, who remains in this business today as a Qdoba franchisee.

A successful figure in the insurance-underwriting business, Bill Foley, came to Karcher’s rescue by paying off the founder’s loans and taking ownership of the 400,000 shares that had been put up as security. Foley then amassed a controlling interest in the company, installed his own management team, and began buying up other brands as Karcher looked on. The one-time hot dog cart operator died in 2008.

Technically, the onetime housewares salesman wasn’t the founder of the chain that made him an industry superstar. Indeed, he and his partners had originally tried to secure Peets Coffee as their vehicle to change America’s caffeination habits. But Schultz was the individual who made Starbucks the industry gamechanger it remains today. That’s why the whole world perked in 2007 when a haymaker of a memo to then-CEO Jim Donald found its way into public view. The leaker of the internal note was never identified, but many suspected that the culprit was Schultz himself.

Without jabbing a finger directly at Donald, Schultz asserted that the brand had lost its mystique and integrity because of changes that were undertaken to streamline operations. “For example, when we went to automatic espresso machines, we solved a major problem in terms of speed of service and efficiency,” he wrote. “At the same time, we overlooked the fact that we would remove much of the romance and theatre that was in play.”

Similarly, putting freshly roasted beans in sealed containers better preserved the coffee’s flavor, but stores no longer exuded the aroma that grabbed by-passers when less-effective packaging was being used, Schultz asserted. The operational advancement had robbed the brand of “perhaps the most powerful non-verbal signal we had in our store,” he wrote.

“We desperately need to look into the mirror and realize it's time to get back to the core and make the changes necessary to evoke the heritage, the tradition, and the passion that we all have for the true Starbucks experience,” concluded Schultz. By then, he’d been out of the CEO job for seven years, though he still served as chairman.

Schultz took responsibility for the brand’s drift, and even thanked Donald in the memo for his leadership. But within a year, Donald was out and Schultz was back in the CEO’s chair. He would remain there until he relinquished the job to current-CEO Kevin Johnson in 2017. 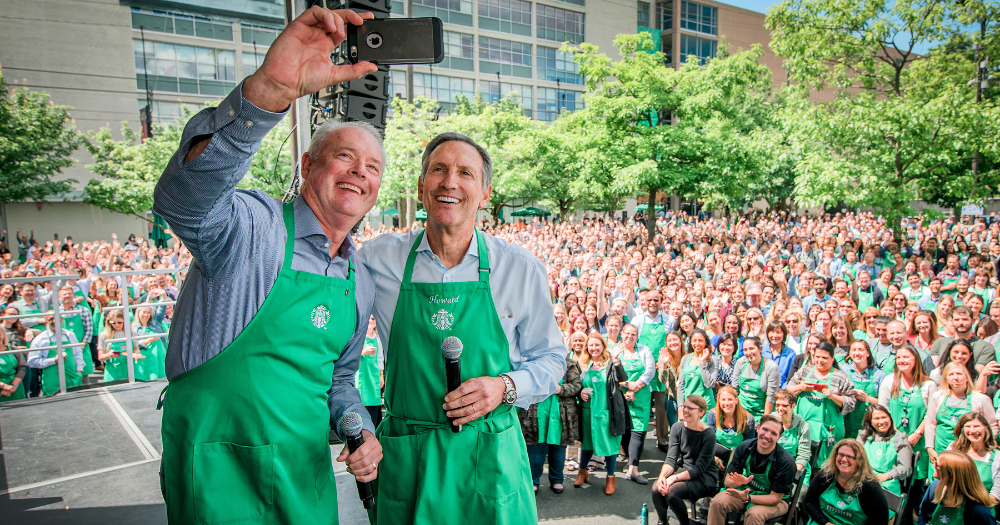 Give Schnatter an assist on this one. Carney’s ill feelings toward his brainchild might never have been known if Papa John’s hadn’t pressed the Midwesterner into service as a seemingly reluctant mercenary. Carney had founded Pizza Hut in partnership with his brother, Dan, in 1958 and sold it to Pepsico in 1977 for $320 million in stock. Frank was asked to stay on as president, which he did for three more years. By 1980, he’d had his fill of the pizza business. But an acquaintance of Schnatter’s brought the two together, and Carney became a franchisee of Papa John’s in 1994, when the brand was still making a name for itself.

A big part of that effort was a favorable comparison between Papa John’s pizza and Pizza Hut’s pies. Schnatter realized his chain’s quality claims would be driven home by having Pizza Hut’s founder attest that the upstart brand was more satisfying. Carney agreed to appear in Papa John’s first national TV commercial, a cheeky spot that depicted a fictional meeting of Pizza Hut franchisees. Carney bursts into the gathering in a Papa John’s apron and stiffly delivers his sole line: “Sorry, guys, but I’ve found a better pizza.”

For the 45 years that he and his younger brother owned and operated the Friendly’s family dining chain, Prestley Blake never took home more than $50,000 in pay and bonuses. That reserve may have been a result of the Blake brothers starting their venture in 1935, smack in the middle of the Great Depression.

Whatever the reason, frugality stuck with Prestley, the elder of the Blake brothers. In 2003, some 24 years after the siblings had sold their venture to Hershey Corp. for $167 million, and 15 years after restaurant-chain veteran Don Smith had bought Friendly’s from the chocolate company for $375 million, Prestley Blake couldn’t hold his tongue when he saw Smith treating himself to such indulgences as a private jet. A company plane! And he even used it sometime for personal travel!

Smith had sold the company several years earlier to a less-than-enthused public and continued as CEO. As the stock price dropped, Blake started amassing shares until he became the second largest stakeholder. Along the way he sued Smith, alleging that the CEO was misusing corporate funds. He all but shouted as much to media in New England, where he was a legendary figure. Many noted that he was picking the high-profile corporate fight at age 89.

Blake also griped about Smith’s simultaneous management and ownership at the time of Perkins, a family chain that competed with Friendly’s. (Smith said he needed the plane in part to shuttle back and forth from Perkins’ headquarters in Tennessee and Friendly’s home office in Massachusetts.) Blake loudly voiced his opinion that Smith was favoring Perkins at the expense of Friendly’s.

Smith eventually agreed to reimburse Friendly’s for personal use of the corporate jet. He reached out to Curtis Blake in hopes of finding an ally to prevent Prestley Blake from wresting control of the company away from its management. The younger Blake was sympathetic to Smith’s cause but couldn’t convince his big brother to back off. Under the pressure from Presley and allied stakeholders, Friendly’s was sold to Sun Capital, and outside management was brought in.

At the time of Kroc’s death in 1984, McDonald’s was still being run by individuals who had worked with the entrepreneur almost from the time he acquired the concept from Dick and Mac McDonald. Chairman Fred Turner, for instance, had been Kroc’s grill man. So the spiritual father of the chain wasn’t known to sound off publicly on the trustees of his empire. But the manager of a store within view of the California residence where Kroc lived after retiring in 1974 wasn’t so fortunate.

Executives working for McDonald’s at the time said Kroc would sit outside his house with binoculars to see how the unit was being operated. How long, for instance, were cars sitting in the parking lot, and what did that say about speed of service? Was any litter blowing around the parking lot? Kroc would then pick up the phone and call the unit or the chain’s home office to share his pointed observations.

Officials learned to manage the situation by picking a particularly diplomatic individual to run the store.

More famously, Kroc criticized the marquee employees of his other late-life venture, the San Diego Padres MLB team, while the players were still in the stadium. After one particularly bad outing by the squad, Kroc took over the public address system to apologize to fans for the awful performances they’d witnessed and shared his assessment that the team’s manager must be stupid.

His public critique led to the adoption of policy by MLB that the public address system was off-limits to team owners.

Correction: An earlier version of this story incorrectly stated the last name of Outback's co-founder. It is Chris Sullivan, not Chris Thomas.