It’s autumn, the season of blitzes, flea-flickers and stunting linemen. The time when millions of fans across the nation gather to watch their favorite NFL and college teams compete every week, and restaurant operators (recognizing a good marketing opportunity when they see one) launch events and offers designed to tap into football fever and increase sales. To make sure your promotions don’t go down and out, consider these tips. 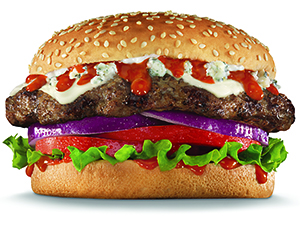 Hardee’s and Carl’s Jr. tested Buffalo Blue Cheese Burgers in the spring, and they performed so well that parent company CKE Restaurants Holdings Inc. decided to roll them out to coincide with the start of the football season. “People absolutely associate football season with burgers and wings,” says Brad Haley, chief marketing officer for both chains.

As the name suggests, the burger (which sells for $2.89 as a single) contains blue cheese but also an unusual ingredient: Frank’s Red Hot Buffalo Wings Sauce, for an added kick. “If there’s no compelling offer, you don’t stand much chance of being successful,” says Haley.

Let customers get in the game

“When you look at our guests, they’re technology-driven,” says Tom Rysavy, director of marketing North America for Buffalo Wild Wings. As part of its football-themed promotion, the chain introduced the Big Kick Challenge, an augmented reality football-kicking game in which customers compete for gift cards and tickets to the Buffalo Wild Wings Bowl game in Tempe, Ariz. With a free app they download to their smartphone, customers can attempt field goals from varying distances and in different weather conditions. The kicker: They have to be in the restaurant to participate, which means they’ll be ordering food and beverages.

Brick House Tavern + Tap sets aside VIP areas for parties of four to six, where they can enjoy in-restaurant “house parties.” Customers can watch their favorite games and receive Brick House giveaway items. The 16-unit chain also introduced new sandwiches, such as the Southern Fried Chicken sandwich, and new appetizers (including Shock Top Mussels and Duck Wings) plus daily specials and specialty drinks to generate traffic from diners who aren’t among the football-obsessed. “By adding elements for both football fanatics and those who don’t know a Bronco from a Cowboy, we appeal to a broad audience,” says James Blystone, Brick House’s senior director.

Pay them a “compliment”

Malarkey’s Grill and One Hell of an Irish Bar, in Long Beach, Calif., offers a complimentary buffet including tacos, jumbo hot dogs, chips, barbecued beans and other items during Monday Night Football in its bar area. And the idea has paid off in greater bar revenues. So many customers show up that “we have to shoehorn people in there,” says owner Patrick Holleran. None of the items is high-cost, and they attract customers on a traditionally slow day. “We cringe when football season ends,” he says.

What happens when the Chicago Bears force a takeaway? They “trigger” the Tavern Double Tuesday promotion, when diners at Chicago-area Red Robin Gourmet Burgers can receive a free Tavern Double burger with the purchase of two beverages and a burger, entrée or entrée salad (redeemable the next Tuesday). The same offer is available in Seattle when the Seahawks score a touchdown from the red zone, and in Denver when the Broncos sack the quarterback twice in one game. “This is a way of aligning with the team and extending [team] spirit to the next week,” says Denny Marie Post, chief menu and marketing officer.

During the Flight Time promotion at 15-unit Buffalo’s Café, a pass thrown for fifty yards during Monday Night Football triggers the sale of wings at half-price. “Discounts can bring people in when promoted correctly,” says Thayer Wiederhorn, marketing vice president.

Whatever the tactic to fuel team spirit, the most important tip is to keep sales as the ultimate goal. “You can’t treat them as goodwill,” says Red Robin’s Post. “[But] they have to generate traffic.”