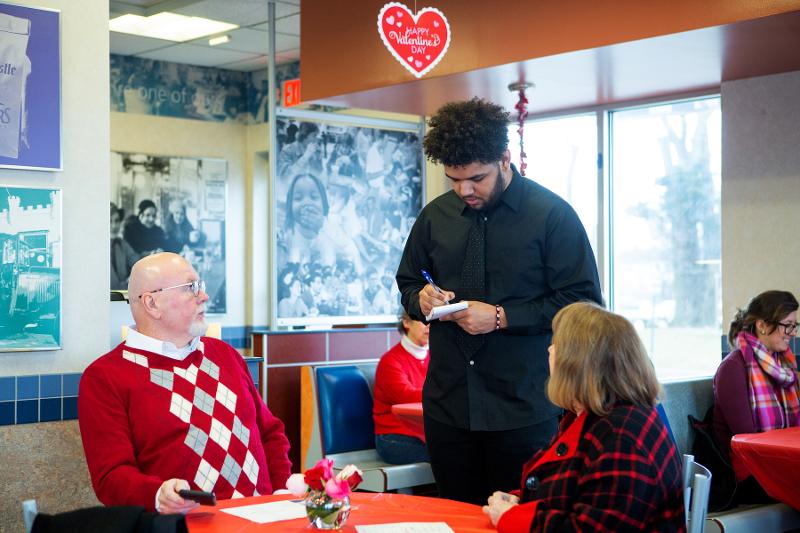 What started out as a joke nearly 30 years ago this year became downright popular: Valentine’s Day at White Castle.

The Columbus, Ohio-based fast-food chain served more than 30,000 people who made reservations through OpenTable and showed up in limousines and made marriage proposals at a chain typically known for its low-priced sliders and overnight hours.

That was up 14% over the previous year and was a record for the chain. Customers included rapper Cardi B’s sister, Hennessy, who reserved an entire New York City restaurant.

“The crave is a powerful thing,” Jamie Richardson, vice president for the 365-unit company, said in an interview. “Love was in the air.”

White Castle has been running its Valentine’s Day event for 29 years. For one night, the fast-food chain converts itself into an upscale restaurant. Customers make reservations. There is hostess seating and table service.

Tables are adorned with red and white tablecloths, and the restaurants are festively decorated for the holiday.

The tradition began in Minneapolis and St. Louis. “It started as a little bit of a joke,” Richardson said. The idea took off, and this year the Valentine's Day event was held in 14 states.

It’s a sign of the company’s culture that it would acknowledge the irony of holding a swanky event at a restaurant with an average check under $9. “We still don’t take ourselves too seriously,” Richardson said.

The chain has always taken reservations for the evening, but it was labor-intensive. Three years ago, White Castle began taking reservations through OpenTable, which eased the process considerably.

“The beauty with OpenTable is you never miss a call,” Richardson said. “It’s been a big win. We know and understand how many people are signing up.”

And, as usual, many of the reservations were last minute. Still, one week before Valentine's Day, Richardson said, White Castle was 9% ahead of pace.

The event starts at 4 p.m. and typically ends at 10 p.m., with the last seating at 9:30. General managers, who boast an average tenure of 20 years with the company, help drive considerable energy behind the effort. “It’s really transformative,” Richardson said.

This year, White Castle added a Valentine’s Day pop-up in San Antonio, the headquarters of grocery chain H-E-B, which first started selling frozen White Castle sliders in 1988. The pop-up served more than 800 people, one of whom got down on one knee and asked his girlfriend to marry him.

“A young man asked me if he could talk to me,” Richardson said. “I was hoping he wasn’t going to complain about the food. But he asked if he should ask his girlfriend to marry him. Ten minutes later the mariachis stopped playing, and he got down on his knee. She said yes.”

That wasn’t the first. “It’s not uncommon to have great memories made, whether it’s wedding proposals or actual weddings on Valentine’s Day,” Richardson said. “They can always use Chicken Rings. That’s always an option.”

As for why this year’s Valentine’s Day turned out to be a record for the company, Richardson has some theories. OpenTable has certainly helped. So did the fact that Valentine’s Day was on a Friday. Hennessy’s attention certainly didn’t hurt.

“It’s amazing to see people show up in chauffeured limousines,” Richardson said. “Some people show up with a cello or a violin and they set up in a corner and start playing.”

“It’s really about the friendships we make,” he added. “People love the food. They can have a ritzy night out without an expensive budget.”