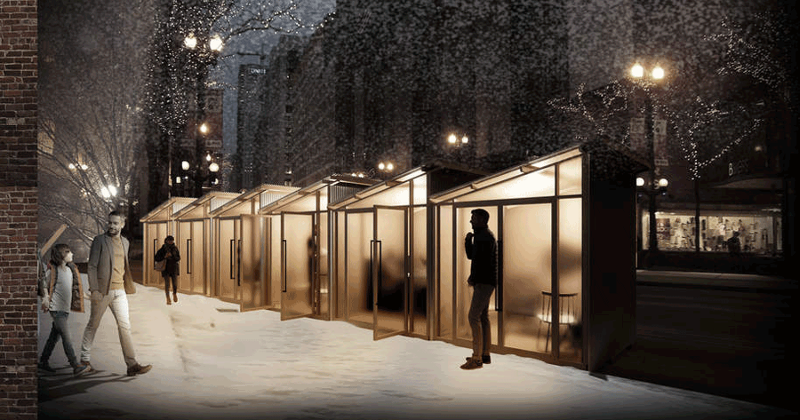 Cold weather could potentially stall restaurants’ recovery as patio dining goes away and a third wave of the coronavirus keeps states from opening indoor dining. Yet a shift in consumer spending could keep some restaurants warm during the chilly months.

But that recovery has also slowed, largely due to mass closures of independents, continued restrictions on dine-in service and a slow recovery in certain sectors, like urban concepts, fine dining and eatertainment.

The winter could change this equation, however. For one thing, patio dining is about to end in many parts of the country—I write this, for instance, as a snowstorm is about to dump eight inches of snow on my own patio—thus removing a lifeline from many restaurants.

That will reduce capacity, potentially hurting restaurant sales. What’s more, it’ll drive people inside restaurants at a time when the CDC says eating in restaurants could be dangerous.

The U.S. is at the outset of a “third wave” of the coronavirus—a renewed outbreak that some believe could prove to be worse than the first. States appear reluctant to return to the restrictions of the past, but it can’t be ruled out if the wave worsens.

But it may not matter what states do. Consumers are concerned: 51% of people in a survey told CivicScience they are either somewhat or much more concerned about the virus, the most since early July.

That is translating into consumers saying they’re less comfortable eating out—43% told CivicScience they’re comfortable with dining out now, down from 52% in mid-September. Meanwhile, 41% said they’d be comfortable six months from now or longer, up from 32% a week earlier and among the highest rates since the survey was first taken in early April.

In short, a third wave could be problematic for dine-in restaurants. That could hammer industry employment, according to the benefits firm Gusto—which noted that efforts to improve capacity by restaurants have been key in bringing back business in the past few months, which is notable given the potential loss of that capacity extension.

But recall back in mid-April when consumers first started breaking out and ordering from drive-thrus and other takeout sources. Consumers are certainly not going to eliminate restaurants altogether.

What’s more, they’ll likely shift spending toward the restaurants they do use. Go back to that Facteus report: Consumers have been spending less on experiences during the pandemic—they’re not going to amusement parks or sporting events or movie theaters. Movie theater spending was down 88% last week.

According to the Deloitte holiday retail survey, consumers expect to spend 7% less during the coming holiday season. But they’re shifting their spending. They’re spending less on travel, for instance, and more on things like holiday furnishings and décor. Consumers also expect to treat themselves to food and beverages and clothes, much like they do every year.

Spending shifts could provide a backstop to industry spending.

That said, the economy remains a problem and the Deloitte survey noted that 40% of shoppers expect to spend less this year, largely because of economic concerns. A stimulus agreement between Republicans and Democrats could probably go a long way toward easing some of those concerns, at least temporarily.

Still, restaurants need to be prepared to keep their focus on takeout and find new ways to improve capacity—not to mention safety—as the weather cools.