Tossing up a salad in the dead of winter may take a bit of legwork. Sourcing the variety of produce necessary to create a colorful mix with complex, fresh flavors can be challenging. But that doesn’t stop David Bazirgan (a.k.a Baz), chef at Fifth Floor at the Hotel Palomar in San Francisco. He’s a regular at the Farmer’s Market in San Francisco’s Ferry Building, and it’s packed with produce. 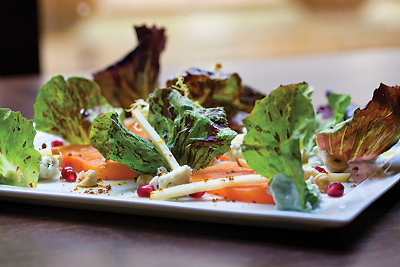 For his Market Salad now on the menu, Chef Baz compresses fresh persimmons in a sous vide machine, which gives them a denser texture, intensified flavor and appealing translucence that contrasts with the dark greens. Hazelnuts, Pt. Reyes blue cheese and pomegranate pull the salad together. “I’m using sous vide to cook other produce too. The technique not only enhances texture and flavor, it prolongs shelf life a little,” he says.

Another dish that showcases seasonal vegetables is Slow Cooked Squab with root vegetables, black trumpet mushrooms and bacon. Chef Baz likes to mix up cooking techniques on the plate, roasting some of the roots in their skin, cooking others sous vide and pureeing some. Other sections of the Fifth Floor winter menu are featuring Asian pears, icicle radishes, citrus and dates, as well as preserved lemons and pickled porcinis prepared in-house.

The cuisine at Fifth Floor draws from Mediterranean and global influences, but seasonality is the number one priority. “You can’t compete in California if you don’t cook seasonally,” claims Bazirgan. Coming from a 10-year stint in Boston, he says it’s pretty great to be cooking now in San Francisco with its seasonal bounty.