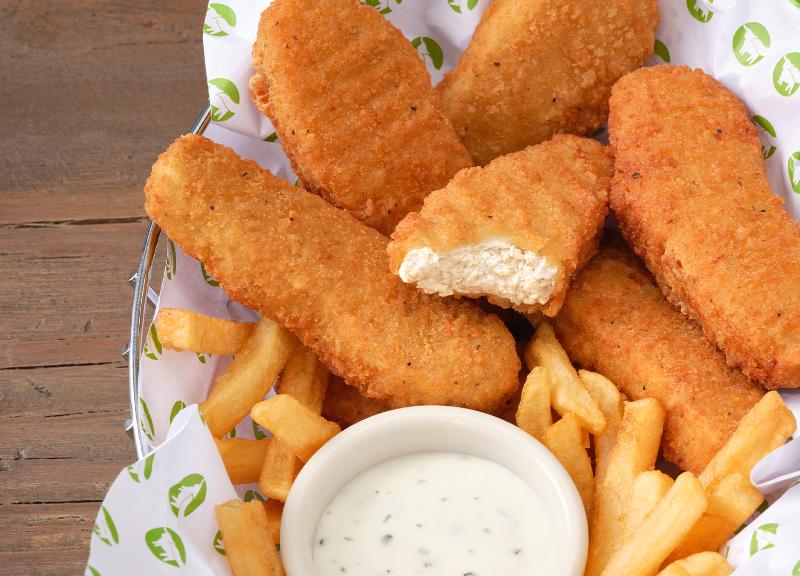 Photo courtesy of Beyond Meat

Breaded chicken tenders, a crowd favorite on many chain menus, are now widely available in a plant-based version with the rollout Thursday of Beyond Chicken Tenders to restaurants nationwide.

The plant-based tenders, produced by Beyond Meat, mimic the taste and look of traditional chicken tenders. They’re made with faba beans and peas and contain 14 grams of protein per serving. The plant proteins are formed into a chicken finger shape and breaded to create a crisp coating when cooked.

According to a statement by Beyond Meat, consumers can start looking for Beyond Chicken Tenders on the menus of nearly 400 restaurants across the country. These include Dog Haus, Epic Burger, Romeo’s Pizza, Toppers Pizza and Bad Mutha Clucka.

Consumer demand for chicken is high and certain parts of the bird—including the wings and breasts—have been in short supply with the surge in chicken sandwiches and wing concepts in the last year. That has pushed up prices for the commodity.

Beyond Meat is hoping to capitalize on the supply/price challenge with this new foodservice product.

“As restaurants are rebounding while struggling to meet soaring consumer demand, Beyond Meat is proud to offer a plant-based option for the ultimate everyday, nostalgic or late-night craving that’s perfect as a standalone appetizer or entree, or as an addition to sandwiches, salads and tacos,” the company said in a statement.

Beyond Meat was a leader in getting plant-based burgers on chain menus and customers no longer consider them a novelty, according to Technomic Ignite Consumer data. Consumers are now more likely to purchase meatless burgers for environmental and health reasons than for their uniqueness, Technomic found in a survey. Plant-based chicken tenders are newer to the market but with wider availability, should be on their way to becoming mainstream as well.