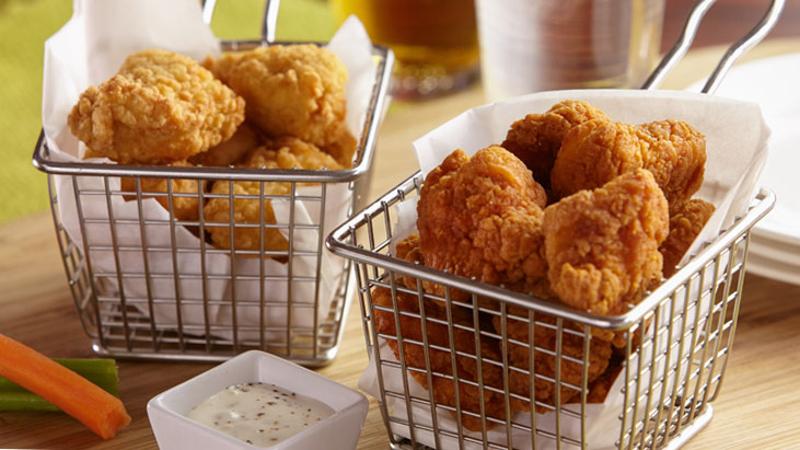 Spicy chicken wings have taken off as an iconic American food since their debut at the Anchor Bar Restaurant in Buffalo, N.Y., in 1964. They reached a new milestone during Super Bowl 50 weekend in February, when more than 1.3 billion wings were consumed, according to the National Chicken Council.

The emergence of boneless wings—breaded, boneless chunks of chicken breast with zesty flavors—has made a good thing even better. In fact, research shows that boneless wings complement traditional bone-in wings on restaurant menus, boosting the entire wing category. Thus operators who menu only bone-in wings would profit from adding the boneless variety. And those who already have boneless on the menu can boost overall sales by promoting them.

Actually, more than half of consumers in a recent online survey by Pierce Chicken said they prefer boneless chicken wings over bone-in wings. That contrasts with NPD CREST data which found that 64% of the wing orders in commercial foodservice in the last four quarters were for bone-in wings.

“That represents a real opportunity for restaurant operators,” says Keith Arnold, head of marketing for Pierce Chicken. “There’s a lot of room to grow boneless wing sales, and the good news is there are a number of things operators can do to tap into that opportunity.”

Although there is a perception that male consumers prefer bone-in wings by a wide margin, in reality, 56% of men surveyed said they prefer boneless wings, as did 54% of women. Thus both genders clearly want the boneless option.

The reasons consumers give for choosing bone-in wings include “they are more natural,” “I like getting messy,” “that’s what a real man eats” and “even though they are messier and more difficult to eat, they have more flavor.”

Not surprisingly, boneless wings appeal for different reasons. Included are “they are easier to eat and less messy,” “more meat on boneless wings” and “less waste.”

Arnold has found that a very significant trend happens when operators add boneless wings to the menu—overall wing category sales rise 20-30%. “Boneless wings on the menu allow wing fanatics to indulge even when they don’t want to deal with the mess,” says Arnold. “But they also appeal to consumers who don’t normally eat wings.”

The research also shows that parties with kids are more likely to order boneless wings, especially when the kids are six years old or younger. Adding boneless wings, which are made of whole muscle chicken breast, to the kids’ menu can be an upsell over traditional chicken nuggets. And including boneless wings with family meal deals in another way to increase check averages.

When it comes to promoting boneless wings, Arnold says signage and menu descriptions should emphasize flavor, tenderness and juiciness—all key sales drivers. The sauces available also are important. Offering patrons a choice of flavorful sauces will enhance the appeal of boneless wings and help operators get the most out of the wing category.