The industry’s giants are in full battle mode, with Taco Bell, McDonald’s, Burger King and other QSRs publicly duking it out for a bigger piece of the $30 billion breakfast pie. According to the Breakfast Insights for Champions report released last month by Food Genius, a research company in Chicago, the availability of breakfast away from home has increased 13 percent in just the last nine months; today, breakfast is available at almost half of restaurant locations nationwide. The quick-service segment is the most active, confirms the report, while casual and fine dining are significantly underrepresented. 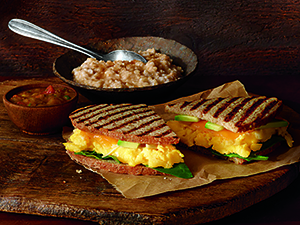 So what exactly are consumers looking for when they stop by a QSR or fast-casual restaurant in the morning? During the week, speed and portability rule, finds the 2013 Breakfast Consumer Trend Report published by Chicago research firm Technomic. Customers grabbing breakfast to go want a handheld option that they can eat in the car or at their desk.

Breakfast sandwiches still are the most popular breakfast item, appearing on some 42 percent of menus, says Food Genius. But inventive restaurant operators are taking the a.m. sandwich in new directions—or abandoning the bread all together.

Though atypical for a pizza concept, 19-unit fast casual Uncle Maddio’s is testing a breakfast program in its Charlotte, N.C., location. “A large number of people pass through the Bank of America building where we’re located, and the Chick-fil-A next door does a lot of breakfast, so we wanted to try it,” says Alex Cook, vice president of operations, research and development and corporate training.

Pizza is not a usual breakfast choice, so Cook developed a commuter-friendly alternative called the Break-Zone ($3.99). Like a calzone, fresh pizza dough is folded to enclose a filling that includes scrambled eggs, cheese and ingredients such as bacon, sausage, onions and peppers. Everything except the eggs already existed in Uncle Maddio’s inventory.

“The Break-Zones are all prepared and baked to order and ready in 4 to 5 minutes,” says Cook. The new menu—which 85 percent of customers order to go—also includes breakfast pizza and panini. In four months, breakfast business in Charlotte is trending positively and consistently every week, Cook says, and Uncle Maddio’s plans to expand the menu to airport locations. “The biggest challenge is getting people to realize that a pizza concept can align with breakfast,” he says, adding that the Charlotte crew is promoting the meal through coupons and POS materials.

Dallas-based Corner Bakery Cafe already is aligned with breakfast, but the menu is ever evolving at its 167 locations. “We always look at portability when developing breakfast items,” says Ric Scicchitano, senior V.P. of food and beverage. “Monday to Friday breakfast is all about convenience.” Health also is key. “At least one in four culinary decisions has to have a healthy twist,” he adds.

The two come together in Corner Bakery’s top-selling Power Panini Thins. The three versions—Applewood Smoked Bacon, Chicken Apple Sausage and Avocado and Spinach ($3.50 to $4.25)—are grilled on thinly sliced whole-grain bread and boast 22 grams of protein. They’re filled with scrambled eggs and have less cheese and carbs than the chain’s traditional breakfast panini. An option with gluten-free bread is coming soon. The chain also launched two new breakfast smoothies in April.

Breakfast in a bowl

Oatmeal has become a widespread breakfast option at QSRs and fast casuals. Now grab-and-go bowls are moving beyond hot cereal. On-The- Fly, the takeout arm of the 13-unit Flying Biscuit Café headquartered in Atlanta, does offer a selection of breakfast sandwiches on made-from-scratch biscuits, but its Creamy Dreamy Breakfast Bowls ($4.99 to $5.99 with a biscuit) are the most popular to-go item. The bowls are made with grits, prepared with light cream and white cheddar cheese, then topped with chicken sausage, bacon, shrimp or fried green tomatoes. For $2.50 more, customers can order a combo meal that includes a side of potatoes or fruit and a beverage. “The combos not only offer our customers good value, they boost the breakfast ticket,” says Fuller. Since breakfast is served all day and breakfast items account for 70 percent of sales, that extra $2.50 can be a good chunk of change.

Breakfast bowls are an appealing way to menu health, says Sabrina De Sousa, partner in New York City’s 20-seat Dimes cafe, where 25 to 30 percent of business is takeout. Her Brazilian heritage prompted De Sousa to create several acai breakfast bowls ($8.50 each), made with the high-antioxidant acai berries native to Brazil. The Strawberry Acai bowl, for example, is a blend of strawberries, acai and bananas, topped with housemade granola and bee pollen. Another Dimes breakfast item is Chia Pudding ($8), made with chia seeds soaked in mashed bananas and almond milk. “Both have turned into real crowd-pleasers,” says De Sousa.