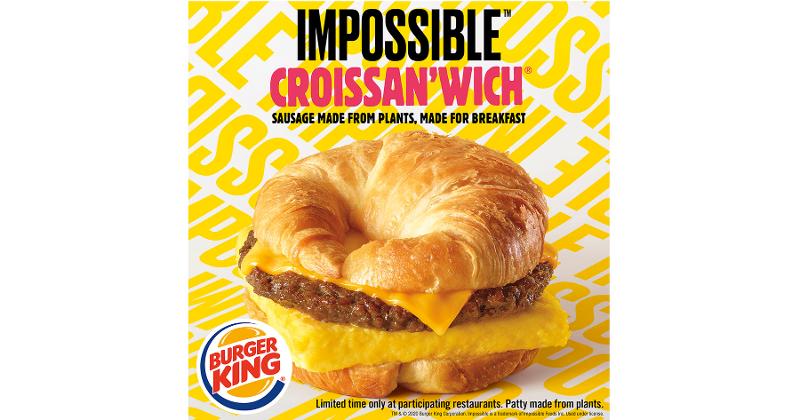 It worked for the Whopper, so why wouldn’t Burger King try a plant-based option at breakfast?

The Miami-based burger chain on Tuesday said that it plans to start testing later this month an Impossible Croissan'wich, replicating the chain’s popular breakfast sandwich but with a patty made with Impossible Sausage.

That will make Burger King the first restaurant to test Impossible Sausage on a breakfast sandwich.

The company said it would start testing the sandwich at 139 restaurants in Savannah, Ga.; Albuquerque, N.M.; Montgomery, Ala.; Lansing Mich.; and Springfield, Ill. The sandwich features an Impossible Sausage patty with cheese on a croissant.

The move follows Burger King’s addition of the Impossible Whopper nationwide last year, a move that helped the chain generate 5% U.S. same-store sales growth. Burger King is so pleased with that strategy that it is testing other burgers made with Impossible Foods product believing it can be a growth platform.

Burger King’s announcement coincided with Impossible Foods’ announcement of plant-based pork and sausage at the Consumer Electronics Show in Las Vegas this week.

It also comes as more chains have been trying plant-based foods in the morning. Dunkin’ earlier this year expanded its own Beyond Sausage sandwich nationwide after successful tests in New York City and some other markets.

And it comes as Burger King itself is in a battle over market share in the morning, with the expected addition of Wendy’s to the fast-food breakfast competition. Adding a product that lures curiosity-seekers at breakfast could help defend its market share at a time when numerous chains are expected to market that daypart heavily.