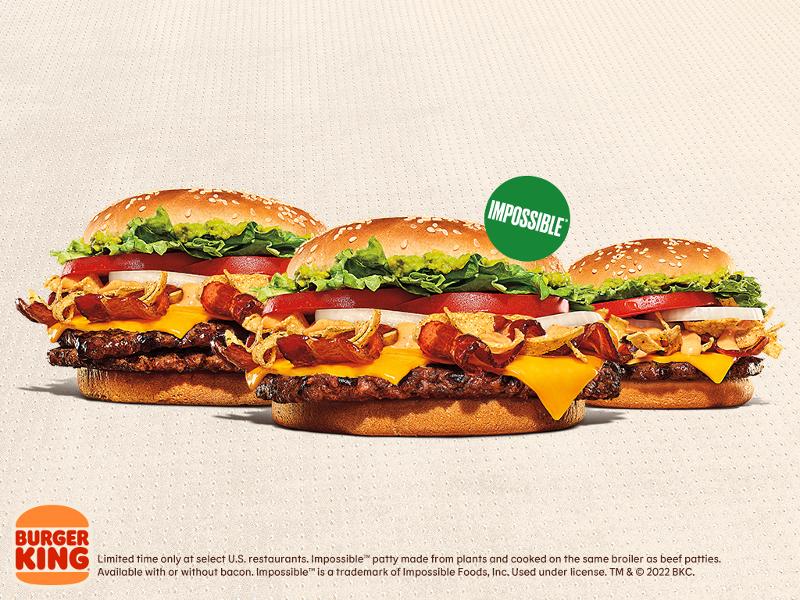 Burger King never said its Impossible Whopper was targeted at vegans. The latest version of the burger leaves no doubt it's not.

The burger chain on Thursday released five new burgers, four of which are Whoppers and two of them feature patties made from the plant-based Impossible Foods burgers.

That includes an Impossible Southwest Bacon Whopper, which features an Impossible patty, tortilla trips, avocado spread, lettuce, onions, tomatoes and a spicy sauce. But it also features bacon which, as far as we know, is still made from pigs.

Burger King is also coming out with an Impossible King, which features an Impossible burger, American cheese, onions, pickles, ketchup and mustard on a sesame seed bun that will be part of the chain’s 2-for-$6 Mix n’ Match menu.

To be sure, companies have long targeted a broader set of customers than just vegetarians with their plant-based offerings, mostly because the population of meatless consumers is much smaller than the group that would prefer to simply limit their meat consumption for one reason or the other. Customers at many restaurants request it.

According to Gallup surveys, the percentage of Americans who identify as either vegetarians or vegans is about 8%, which has been unchanged for at least the past two decades. But, nearly one in four have cut back on meat consumption.

For Burger King, the new burger introductions highlight the chain’s current menu focus as it works to emerge from a frustrating slump that has resulted in the overhaul of its management and led to financial problems for some of its biggest franchisees.

The company has opted to focus on its core menu, notably the Whopper, with various innovations. But it is also making a big push to sell more plant-based items.

In so doing, Burger King is hoping to rekindle the excitement it generated when it first introduced the burger in 2019. The company debuted the burger in the third quarter of 2019. That was also the last time its sales outperformed those of its rival, McDonald’s.