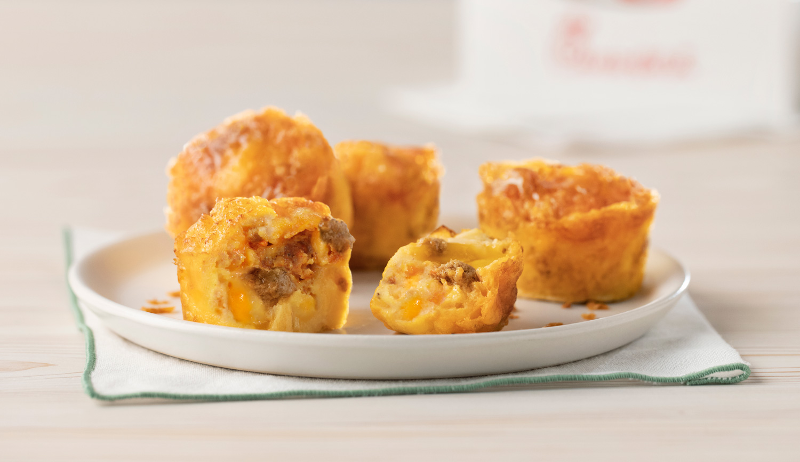 Chick-fil-A will become the latest fast-food chain to try a new lure for breakfast customers when it launches Chorizo Cheddar Egg Bites Aug. 22 at selected units.

The grab-and-go bites, in test for a limited time in select markets, is the first new breakfast item the chicken chain has introduced since 2017, when the Hash Brown Scramble Bowl made its debut nationwide.

Quick-service restaurants have been stepping up the battle for breakfast customers on the go. Last week, Wendy’s added portable French Toast Sticks to its morning menu—the first sweet item to join what has been a successful savory lineup. Taco Bell is promoting a limited-time $5 Breakfast Box combo meal that includes Cinnabon cream-filled pastries.

Chick-fil-A is entering the battle with a savory bite-size breakfast. The Chorizo Cheddar Egg Bites are baked in-house every morning and feature eggs, Mexican-style chorizo sausage and a blend of cheddar and Monterey Jack cheeses. They come four to an order.

“As summer ends and the back-to-school morning routine begins, we wanted to offer our customers a new protein-packed entree that keeps them satisfied when they’re on-the-go without sacrificing taste,” Leslie Neslage, director of menu and packaging at Chick-fil-A, Inc., said in a statement. “Our guests are asking for more bite-sized, shareable breakfast options, and we look forward to hearing what they think about our limited-time Chorizo Cheddar Egg Bites test.”

The limited-time offer will be available starting next Monday at participating restaurants in Augusta, Ga.; Aiken, S.C.; Columbus, Ohio; Norfolk and Portsmouth, Va.; Miami and New Orleans. According to the news release, guest feedback will help determine if the new breakfast bites will be featured on menus nationwide in the future.