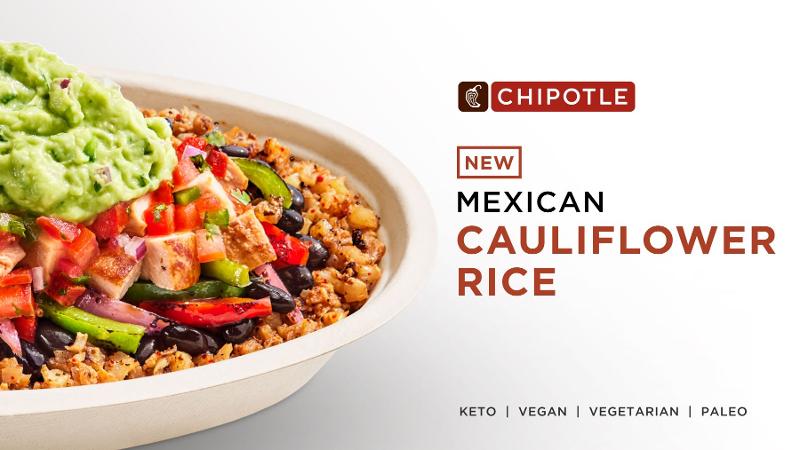 Chipotle Mexican Grill is testing a new twist on the low-carb rice it introduced last year for a limited time, the burrito chain announced Thursday.

Mexican Cauliflower Rice is being tested at 60 restaurants in Arizona, Southern California and Wisconsin.

The new item is grilled and seasoned with a spice blend that includes garlic, cumin, salt and paprika “to give it the rich flavor and vibrant hue of Mexican rice,” Chipotle said in a statement.

Chipotle first tested Cilantro-Lime Cauliflower Rice in July 2020, saying at the time that one out of every three menu requests from customers was for cauliflower rice.

About six months later, Chipotle put the item on menus nationwide, with a $2 upcharge. It stayed on offer from January through mid-May of 2021.

“Our goal is to keep people engaged with our menu,” Chipotle CEO Brian Niccol told analysts during the chain’s first quarter 2021 earnings call. “We’ll have some things on for a time period and then take them off and bring them back.”

“After the success of our Cilantro-Lime Cauliflower Rice last year, we are eager to test a second plant-powered start for any go-to order,” Nevielle Panthaky, VP of culinary, said in a statement. “Our guests crave real, plant-based options, so we developed a new flavor-packed recipe that aligns with our Food with Integrity standards.”

Like its predecessor, the new veggie rice fits with keto, vegan, vegetarian and paleo diets.

Despite the upcharge, Chipotle blamed the costs associated with cauliflower rice as a hit to its overall food costs during the first quarter last year.

Chipotle has been aggressive in its menu innovation in recent years, after rarely making changes to its offerings before that. The chain says it is now adding two to three new menu items per year.

“Not only do these items help bring new guests into the Chipotle family, but they also drive frequency with existing users and give us another opportunity to highlight the brand,” Niccol told analysts during the chain’s fourth-quarter earnings call last year.

“All of these new items performed very well, driving an increase in both check size and transactions,” Niccol said.