Chicken breast has been the darling of restaurant and home kitchens for a couple of decades, touted for its versatility and health benefits. But lately, operators and consumers are beginning to suffer from white meat fatigue. The fact is, dark meat chicken is juicier and more flavorful. Same with turkey. Legs and thighs that have traditionally been exported are now finding their way onto more menus. Heavy dark meat users include Chipotle Mexican Grill and Panda Express. 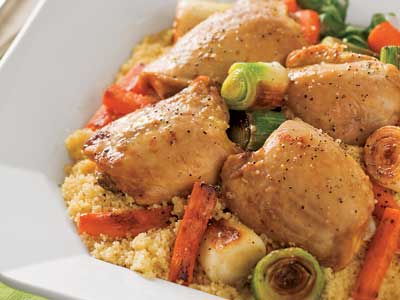 Mega-poultry supplier Tyson Foods is developing more products made from dark meat, including a variety of chicken sausages for retail and the new boneless Cut & Ready line for foodservice. In addition to their richer flavor and softer texture, “the thigh meat pieces in the line are a value option to breast meat,” states Tyson’s product marketing team. While that’s still true, the USDA reports that increased dark meat demand is pushing up prices, particularly for boneless cuts.

A chicken on every plate

Poultry fans have a lot to choose from at any of the 49 locations of Fatz Restaurants, the casual dining concept based in Taylor, South Carolina. The permanent menu features many chicken dishes, including the Fatz signature, Calabash Chicken, as well as a popular turkey burger. And rotating limited time offers also make the most of the birds.

At the end of May, Fatz launched Cajun Fried Chicken as an LTO; it can be ordered as an entrée for $9.99 or as part of the Low Country Sampler ($16.99). “We went with boneless thighs for this item because they are traditionally underutilized,” says Jeff Phillips, VP of menu development. “Besides, this cut is better at retaining moisture. Thighs don’t dry out as much as chicken breasts.”

In each Fatz kitchen, the thighs are seasoned, dredged in Cajun-spiced flour and par-baked. To order, the chicken is flash-fried, then plated with a house-made jalapeño bacon jam. The combination of chicken thighs and bold seasonings delivers the robust flavor customers are looking for, Phillips adds.

The Fatz Turkey Burger is also layered with flavor. Phillips purchases ground turkey patties from Carolina Turkey, a large supplier that happens to be close by. The burger is seasoned with garlic and pepper, enclosed in an onion roll, then topped with grilled red onions, spinach, vine-ripened tomato and a smear of lemon garlic aioli. “It rates high in guest perception,” Phillips reports.

When it comes to its World Famous Calabash Chicken, Fatz sticks to the protein that has made this a perennial favorite. “Chicken breast tenders are marinated with a proprietary seasoning, then vacuum tumbled to pull in the marinade. At each restaurant, we marinate the chicken again in buttermilk and hand-bread it before cooking,” Phillips explains.

In keeping with its “low country-Charleston dining” menu, Fatz tries to source from producers in the Southeast as much as possible. Chickens come from a poultry farmer in Georgia and produce is grown in the region. “We’re upgrading the quality of our ingredients and making the majority of menu items in house, cooked to order,” Phillips notes.

Poultry producers took a big hit in 2011, as wholesale prices for chicken plummeted. To remedy the situation, chicken production for 2012 is estimated to be lower than last year, predicts the USDA’s Economic Research Service (ERS). That’s bad news for operators, who can expect wholesale prices to continue to gradually increase throughout the first three quarters. Wings saw the biggest boost year-over-year, up 90 percent in price in the first two months of 2012; boneless breasts rose 10 percent. And even though a decline in exports is expected this year, prices for leg quarters were 41 percent higher in January and February. In its March, 2012 “Livestock, Dairy and Poultry Outlook,” the ERS forecast that some relief may come in the last quarter of 2012, as poultry production ramps up.

Turkey inventories, on the other hand, were 30 percent higher through the first quarter of 2012. Nevertheless, prices remain strong and show an increase over 2011.

At El Pollo Loco, the Latin-accented concept based in Costa Mesa, California, Heather Gardea, VP of research and development, purchases a lot of legs and thighs—what she refers to as “saddles”—for the menu’s signature citrus-marinated flame-grilled chicken. Some chicken items feature bone-in pieces, while burritos, salads and tacos use the meat pulled off the bones and chopped up. “We like the way dark meat picks up the marinade and turns out more flavorful,” she says, “but it’s gotten much more expensive recently.”

Gardea feels that increased demand is also to blame for the rise in prices. “Dark meat is definitely gaining in popularity,” she adds.

The market is at an extreme high right now,” agrees Fatz Restaurants’ Phillips. “But it’s the same with every protein we feature on our menu,” he says. Besides, poultry still offers good value and is a sought-after protein across all dayparts and menus.