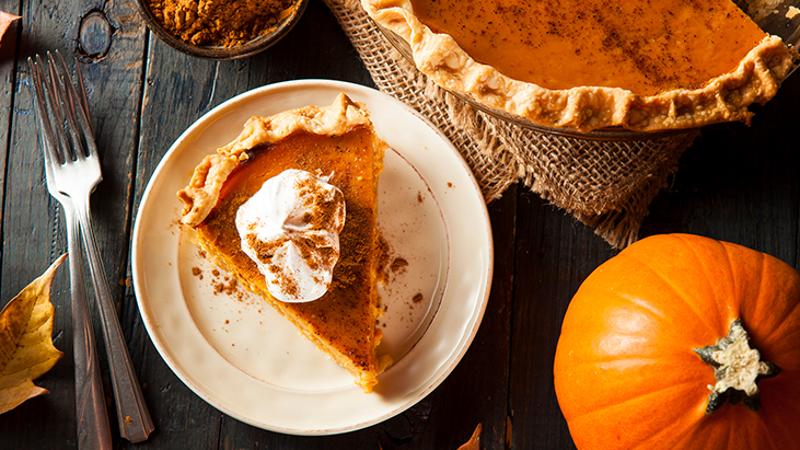 ‘Tis the season for all of those comforting fall and winter flavors that evoke memories of holidays with family and friends.

Think pumpkin and cranberry and peppermint and red velvet. Add in pecans and spice and maybe a splash of bourbon.

Fall flavors have the greatest influence on operator menu innovation, according to Technomic’s recent Flavor Consumer Trend Report. And all of these flavors are welcome additions to desserts and other indulgent treats.

Here’s a look at what to expect from these trending holiday flavors:

Pumpkin and its good buddy pumpkin spice reign supreme on fall menus. This fall, Subway introduced a Pumpkin Spice cookie, Krispy Kreme rolled out a glazed Pumpkin Spice Cake Doughnut, Steak ‘n Shake launched a Pumpkin Spice Milkshake, Au Bon Pain introduced a Pumpkin Croissant and a Pumpkin Blondie, and both Olive Garden and The Cheesecake Factory added Pumpkin Cheesecakes. All these pumpkin desserts are smart business—the flavor’s a hit with consumers. Some 40% of diners say they would order pumpkin pie if it was offered on a menu, according to Technomic’s recent Dessert Consumer Trend Report.

Chocolate-y red velvet flavors also stand out as the winter holidays approach, particularly among female consumers, 46% of whom find it to be an appealing cake or cupcake flavor, according to a recent Technomic Flavor Consumer Trend Report. And 40% of consumers say they would order red velvet cake for dessert, according to Technomic data. Steak ‘n Shake recently rolled out an over-the-top Oreo Red Velvet Milkshake with red velvet cake, frosting and Oreo pieces blended with ice cream and topped with more Oreo pieces, whipped cream and a cherry. Au Bon Pain offers a Red Velvet Cupcake and Krispy Kreme regularly offers red velvet doughnut LTOs in the fall and winter.

Warming flavors are stars at holiday time. Look for desserts spiked with cinnamon and spices such as nutmeg and cloves, as well as sweets infused with bourbon. In fact, desserts featuring bourbon are up 21.5% over the last three years, according to Technomic menu data. Look for bourbon desserts to be paired with flavors of vanilla bean and chocolate. Examples include the Chocolate Bourbon Cake from Brick House Tavern + Tap and the Bourbon Salted Pecan ice cream from Jeni’s Splendid Ice Creams.