For Annie Somerville, executive chef at Greens Restaurant in San Francisco, October is one of her favorite months to cook. “It’s transition time in northern California. There’s still a lot of summer produce available, but fall fruits and vegetables are starting to come in,” she says. “Plus, October weather heats up a bit after the cool August typical in the Bay Area.” 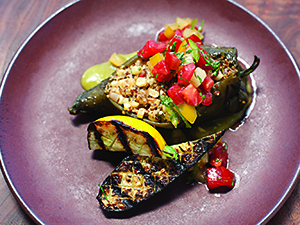 Greens is a pioneering vegetarian restaurant that opened in 1979 and has been at the forefront of the farm-to-table movement way before it was a catch phase.  It’s owned by the San Francisco Zen Center, which also runs Green Gulch Farm in nearby Marin County—a ready source of seasonal, organic produce for Somerville’s kitchen.  She augments this bounty with deliveries from small, local farmers, many of whom she connected with at San Francisco’s Ferry Plaza Farmers Market.

As summer transitions into fall, peppers, eggplant, corn and tomatoes are peaking and plums, figs and berries are still available. Starting to come in are squash, apples, pears, quince and mushrooms. “Lots of chefs are in a hurry to switch as soon as the season changes, but I hang on to late summer ingredients as long as the quality and flavor is there,” Somerville notes. Her secret to creating craveable vegetarian dishes is to use seasonal ingredients, focus on a pleasing contrast of textures and colors and aim for really big flavors. “Every bite should be delicious but not overly complicated,” she says.

“We change around the whole menu about eight times a year but add daily specials as produce comes in. When you’ve been in business 34 years, you have to keep it fresh every day,” Somerville attests.