HLM, one of WGB’s 2021 Remarkable Independent grocers, created the new VP role for Jennings “to shepherd them through a new era of housemade food for retail,” said the chef, whose vision is to take retail foodservice to a new level.

“We have a greater emphasis on seasonality and a focus on technique that is not typically found in grocery. We also have a strong innovations program, where we’re not just following trends, but creating them. And we have phenomenal chefs on the team,” said Jennings, who most recently hired a Michelin-starred chef.

While some retailers rely on food made in massive co-pack facilities or by using pre-made ingredients, HL Fresh is made in-store by trained chefs who get to be creative in executing new dishes every day and develop partnerships with small-format local producers, Jennings explained.

“At Healthy Living, our mission is to be the place where people gather to shop, eat, and work,” co-owner Nina Lesser-Goldsmith said. “Our incredibly talented and experienced chef team created HL Fresh with this in mind and created restaurant-quality to-go meals using quality, whole ingredients. The quality and innovation in ready-to-eat offerings that we are putting forward with HL Fresh are not available in other U.S. grocery stores.”

Jennings has strategically hired a team of chefs, each with a different area of expertise. The chef at the market’s Williston, Vt., store, for example, specializes in meat and is developing an in-house barbecue program, while another Healthy Living chef specializes in Middle Eastern, vegetable-rich, farm-to-table cuisine. All chefs are encouraged to bring their unique ideas and skillset to the highly collaborative effort.

And with the pandemic continuing to curtail restaurant dining throughout much of the country, it’s an opportune time to attract talent to grocery. Jennings has hired chefs and cooks used to working 80-hour weeks, who are ready for a new challenge and a more “normal” work week. He devised a schedule where the chefs work four 10-hour days and three days off.

Currently, HLM operates three stores: two in Vermont, and a third in Saratoga, N.Y. A fourth store is under construction in Shelburne, Vt., and a fifth, as-yet-to-be revealed location is in the works. But as CEO Eli Lesser-Goldsmith told WGB in November, Healthy Living’s growth plans are “sustainable but aggressive” for the coming years. Part of that growth will include the grocer’s culinary team, featuring a chef in each store. 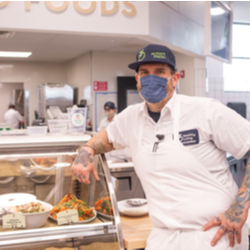 “A la carte is confusing for grocers,” admitted Jennings, who insisted that Healthy Living’s newest store includes a walk-up service window for prepared foods. Like the hot new restaurant in town with a line that wraps around the block, the foodservice window is all about buzz factor. “It gets the guests excited and the team interested in what we’re doing,” he said.

Jennings plans to bring storytelling and a marketing mindset around housemade food throughout the store, including the center aisles. HLM has started roasting its own coffee and is working with one of its chefs, proficient in pickling, to bring housemade pickles, jams and jellies to its stores.

“Grocery is very embedded in policy,” the chef said. “I don’t knock it, but there’s also an opportunity to shake things up—do something disruptive and unusual. Give the customer an experience and you take it from boring grocery shopping to being blown away.”