Back at the start of 2020, menu developers were eager to explore the on-trend flavors, ingredients and cuisines coming down the pike. Among those Restaurant Business was thinking about last December were the expansion of plant-based menus, moving niche global cuisines such as Croatian and West African closer to the mainstream and the rise of ingredients with health-boosting properties. Reducing waste and boosting sustainability efforts were also top of mind.

When COVID-19 hit the U.S. in March, some of these trends were put on pause. Takeout and delivery soon became restaurants’ main revenue stream, pushing up the demand for disposable packaging and putting sustainability on the back burner for a time. And flavor exploration on menus gave way to the safety of comfort foods and best sellers. But as restaurants adapted to the new normal, innovation didn’t stop.

Some of the predicted trends changed course and a number of new trends took hold. These menu items turned out to be the hottest of 2020. 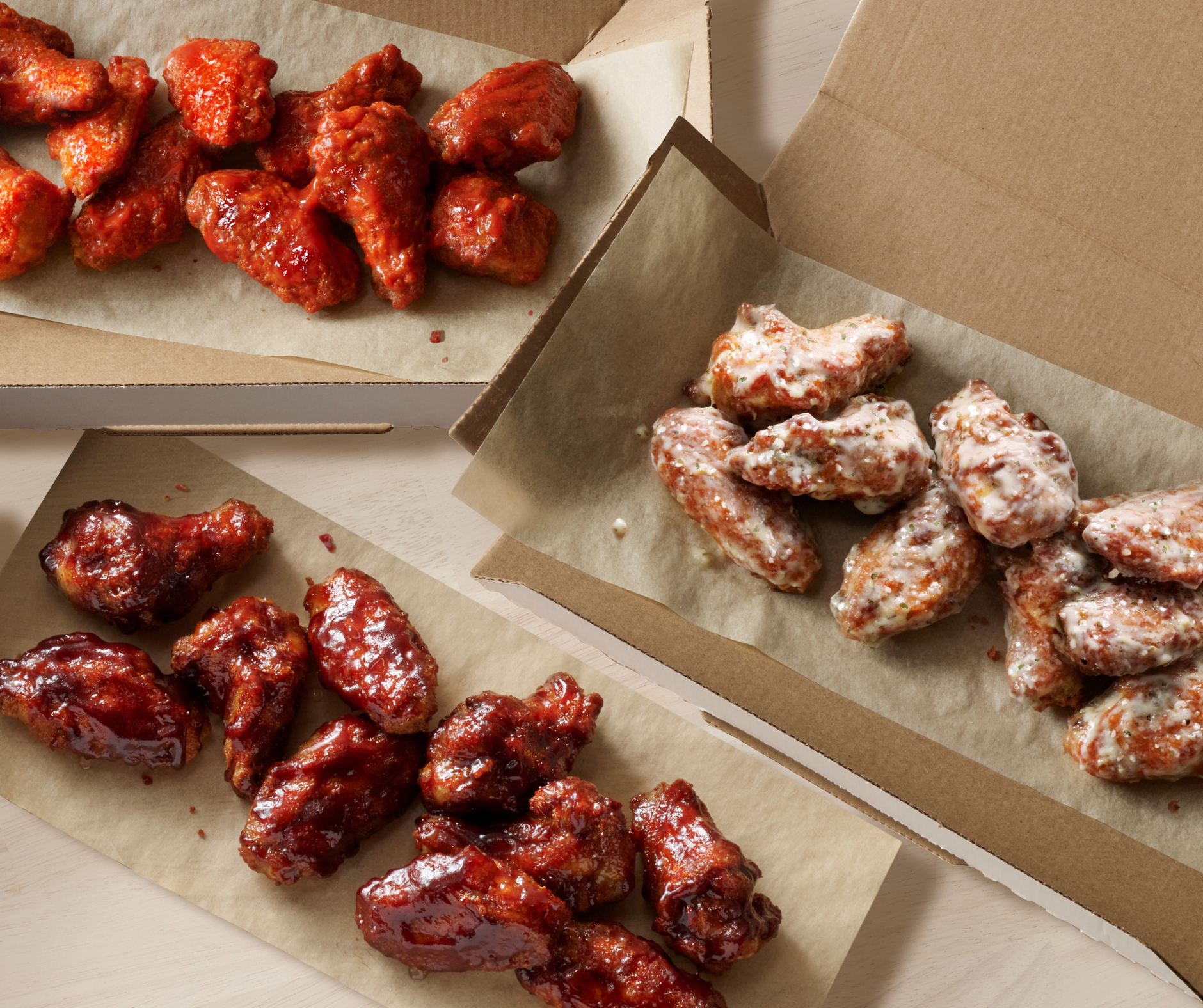 The pandemic closed down indoor dining just as March Madness was about to let loose. The NCCA basketball playoffs are one of the busiest times of year for sports bars and wing concepts—a period when sales of chicken wings fly high.

That was not to be in 2020, as the playoffs were canceled, bringing a halt to both in-restaurant wing sales as well as off-premise orders from those watching the games at home.

But as COVID-19 restrictions continued to grip the country way past March, wings emerged as one of the most delivery-friendly menu items. Restaurants specializing in wings experienced a surge in sales, Wingstop chief among them. The Dallas-based chain’s systemwide sales rose 32.8% during Q3 to $509.2 million.

Chains not especially known as wing destinations either upgraded their offerings or launched virtual chicken wing concepts to capitalize on their popularity. Domino’s had long offered wings as a side to pizza, but the chain “redesigned” them to improve their taste and texture and expand the sauce selection. Domino’s introduced its optimized chicken wings in July.

Brinker International debuted It’s Just Wings in June, a delivery-only concept it runs out of 1,000 Chili’s and Maggiano’s locations. And casual-dining rival Applebee’s is testing Neighborhood Wings in 700 units, with the intention to roll out the virtual concept systemwide early in 2021. 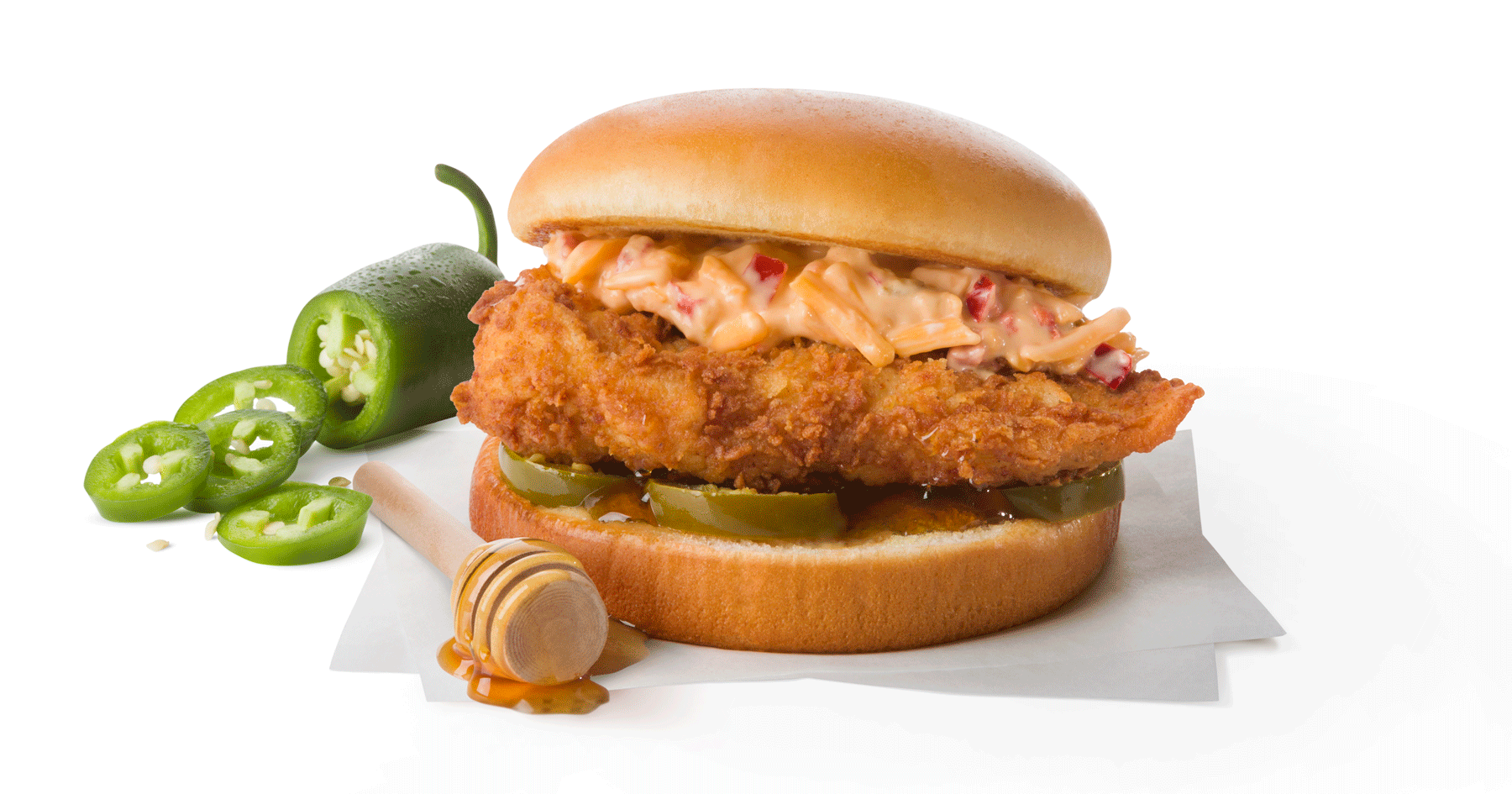 A large flock of chicken sandwiches

A number of operators turned to another part of the chicken—the breast—to fuel a separate but equally strong menu trend: the fried chicken sandwich. The item tapped into several trends that spiked during the pandemic—it satisfies consumers’ cravings for comfort food, is relatively easy to execute and travels well.

In fact, Spicy Chicken Sandwiches earned the No. 1 spot on GrubHub’s most-ordered menu items of 2020, growing 318% year over year.

The fried chicken sandwich initially began its ascent when Popeyes launched its version in Summer 2019. Its success inspired other limited-service chains to ideate and create their own premium sandwiches, each differentiated with a slight twist. Big players including KFC, Church’s and Wendy’s entered the competition, escalating what has come to be known as “the chicken sandwich wars.”

While operators are adding unique touches to their sandwiches, they all share similar components: a crispy fried chicken fillet (either spicy or not), signature sauce, pickles and a premium bun. Several full-service chains are also joining the fray with their entries, a sign that the chicken sandwich wars will continue well into 2021.

The queso wars heat up

Like the chicken sandwich wars, the competition for queso dominance ramped up in 2020. Although the battle was less heated, several major players joined the fray. At the end of February, Chipotle launched its latest iteration of queso blanco, a new-and-improved version made with a base of Monterey Jack cheese. The recipe uses 13 ingredients in all, including cream, which made the queso smoother, as well as serrano, poblano and chipotle peppers. Chipotle’s previous cheddar-based queso was criticized for being too grainy.

A week later, Moe’s Southwest Grill retaliated with a two-day giveaway of its queso—a menu signature for 20 years. The fast-casual chain kept the queso love going in several LTOs and meal kits, including a nacho kit for summer and a Loaded Steak and Potato Burrito and Bowl in the fall.

Queso evolved into a popular takeout choice in COVID-19 orders—either incorporated into other menu items or on its own. El Pollo Loco launched a line of L.A. Mex Burritos as a limited-time offer, including the Queso Burrito—an overstuffed flour tortilla filled with queso blanco, grilled chicken, seasoned fries, guacamole, pinto beans and pico de gallo. 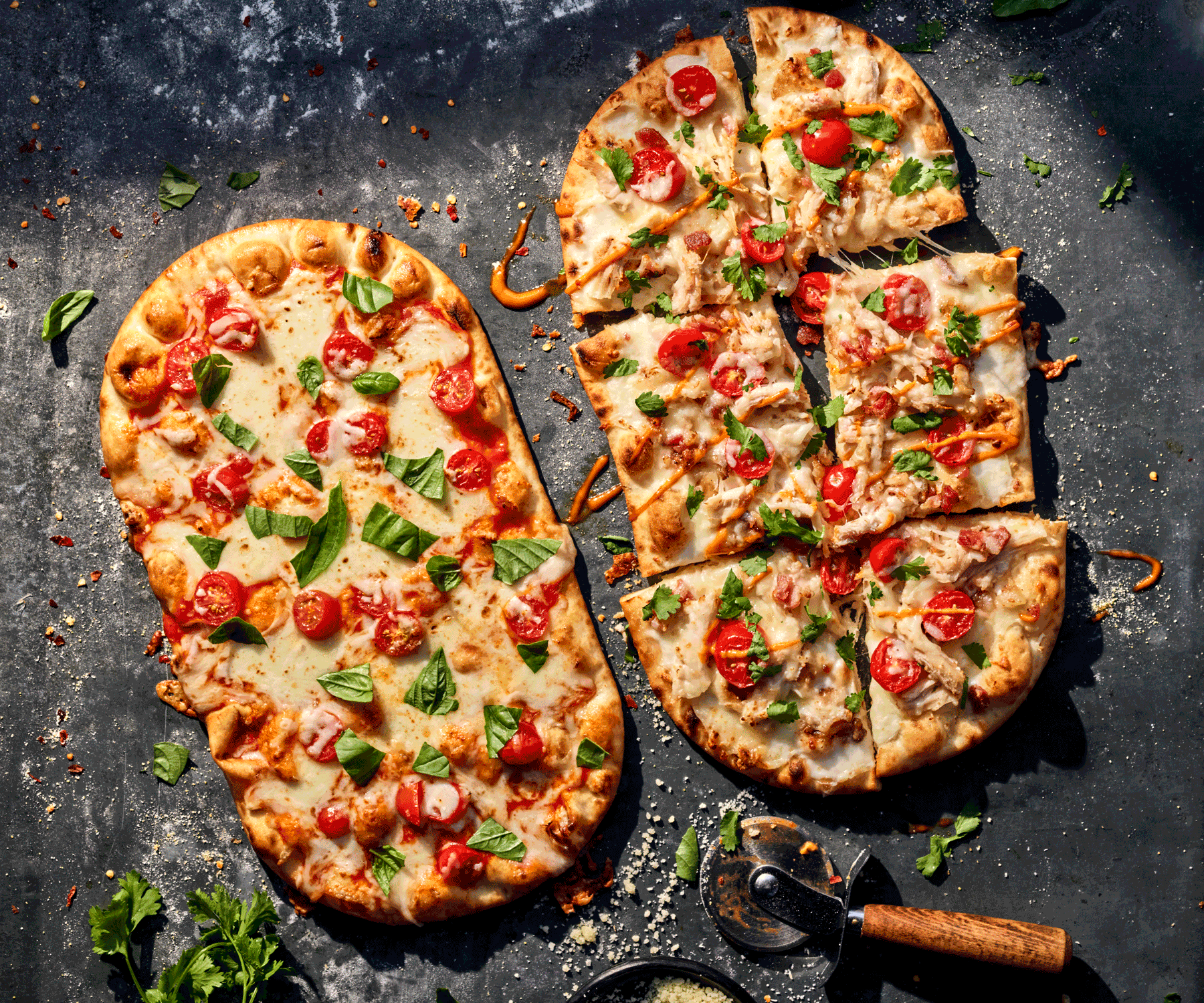 Like chicken wings, pizza is a darling of the delivery channel. Pizza chains that specialize in delivery, such as Domino’s and Papa John’s, saw their business skyrocket during the coronavirus crisis.

The popularity of pandemic pizza was one of the motivators that brought Panera’s new flatbread pizzas to market this fall. Although the development of the new menu category began two years ago, chef Claes Petersson reformulated the recipe slightly to address consumers’ changing needs during the pandemic.

The major tweak was a reworking of the dough to make it thicker and sturdier so it would stand up to off-premise travel and reheating. The pizzas are designed to be family-friendly and shareable, hitting two demands that increased during quarantine. There’s a simple Cheese version; a Margherita topped with cheese, cherry tomatoes and fresh basil; and a Chipotle Chicken and Bacon flatbread pizza.

Some of the pizza concepts that specialize in build-your-own single-serve pies also had to tweak their offerings for delivery. Blaze Pizza, for example, added a 14-inch pie with a thicker crust, which is better for sharing and heat retention. Like Panera, Blaze’s pizzas aimed to get a bigger chunk of dinner business from families and groups sheltering at home.

In fact, the pandemic created a whole new off-premise category: the family meal package. From quick-service to fine dining, restaurants created family meals geared to two, four, six or more diners, available for delivery and curbside carryout. Back at the beginning of the health crisis, family meals focused on comfort foods such as fried chicken, meatloaf, ribs, mac and cheese and lasagna, all rounded out with sides and often, dessert.

But as time marched on, the selections became more inspiring. Mexican, Asian and Middle Eastern concepts jumped on the trend, often tying the meals into holidays such as Cinco de Mayo and Memorial Day. And upscale restaurants created their own packages, upgrading the meals with pricier seafood, steaks and other high-end ingredients. Even Alinea, one of Chicago’s most expensive restaurants, got into the act with an elegant beef Wellington for two.

Family meals gave fast casuals the opportunity to grab a bigger piece of dinner business, often redirecting their catering menus to fulfill this new category. Chains such as Roti, Fields Good Chicken and Qdoba were just a few that found enough success with family meals to keep on innovating in the category. 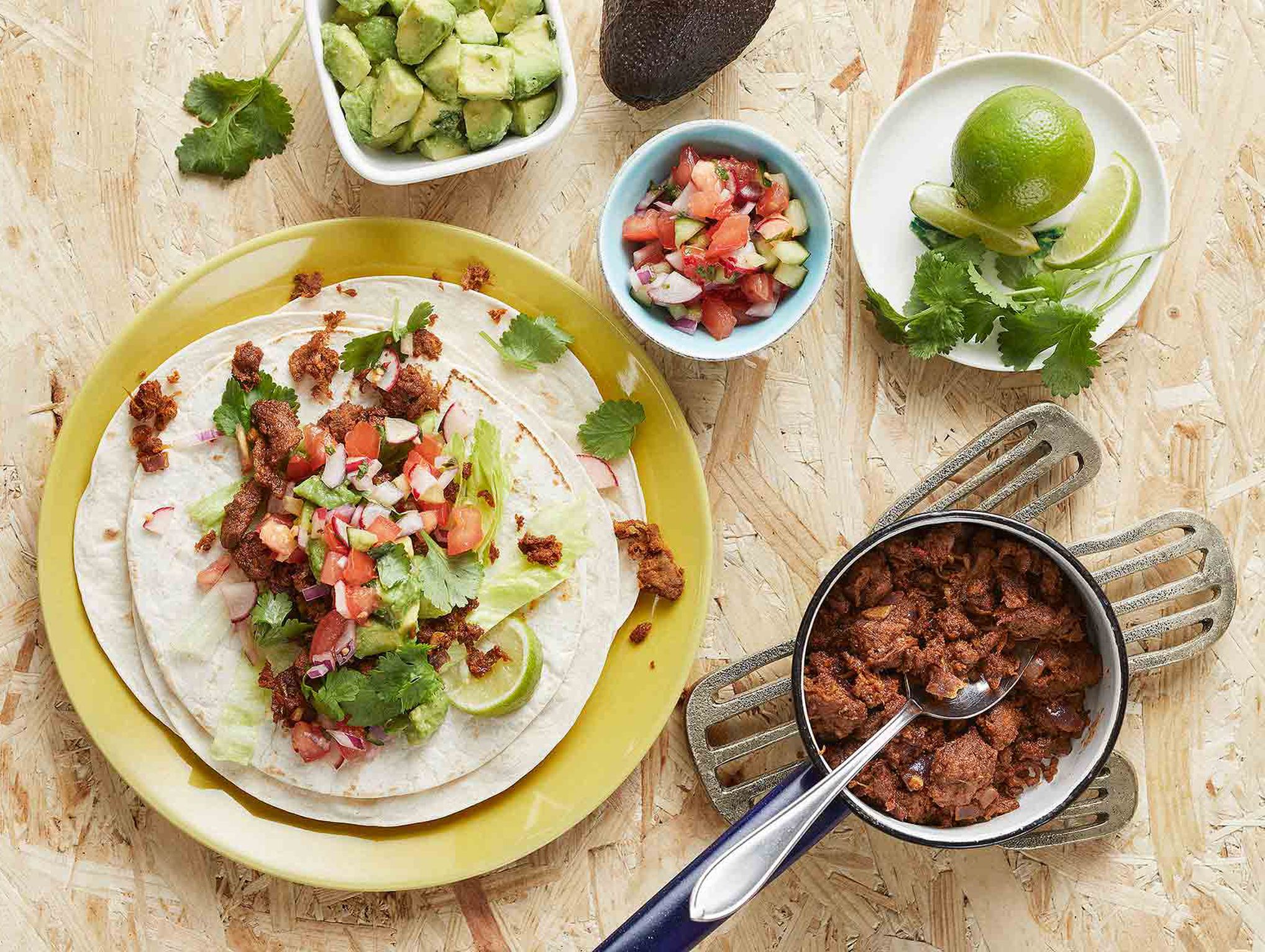 In tandem with family meals, restaurants began offering meal kits to-go as a way to provide dinner along with an activity. Parents and kids stuck at home went for do-it-yourself kits for family-friendly tacos and fajitas, pizza, burgers and doughnut-decorating. But operators also created kits for more ambitious cooks. Kits for making sushi, Vietnamese banh mi and other global specialties became available, and grilling kits featuring steaks, sausages and salmon took off as the weather turned warmer.

Once states started relaxing the rules around off-premise alcohol sales, restaurant and bar operators began packaging takeout cocktail kits as a grownup activity. Kits for everything from margaritas to Negronis, Moscow mules and bloody Marys made their way into consumers’ homes, complete with the spirits, mixers, garnishes and sometimes even the tools necessary to craft signature cocktails.

Which brings us to another 2020 drinking trend: the rise of bottled and canned cocktails. Although brands like White Claw were trending prior to the pandemic, once alcohol-to-go became legit, restaurant and hotel operators began bottling their own signature cocktails for sale. And they featured premium spirits and handcrafted signature recipes—creating a specialty niche in the market.

They’re available in retail outlets, but fast casuals and restaurants without bars are also offering canned cocktails to go as a way to boost the check with booze.

In 2019, the plant-based news focused on the meteoric rise of Beyond Beef and Impossible Burgers on menus. But in 2020, non-animal alternative proteins expanded into breakfast sausages, pork, chicken and even seafood and eggs made from plants.

El Pollo Loco introduced chickenless pollo as a vegan option for tacos and burritos, and KFC is testing plant-based chicken nuggets in California. On the noncommercial side, Sodexo debuted Just Egg products at some of its foodservice venues. Pulled oats are another product that chefs are playing around with as a plant-based substitute for pulled pork in tacos and barbecue.

On the beverage side, oat milk soared in popularity this year. In August, Dunkin’ added plant-based milk nationwide and both Starbucks and Peet’s are testing oat milk lattes. Menu mentions of oat milk have increased 50% year over year, according to Restaurant Business’ sister company Technomic.

The demand for plant-based foods and beverages continues to go up, as consumers look at them as healthier, more sustainable options. Going forward, expect to see more nut and seed milks to emerge and more companies to go into the lab to develop vegan substitutes for meat, cheese, seafood and other animal products.