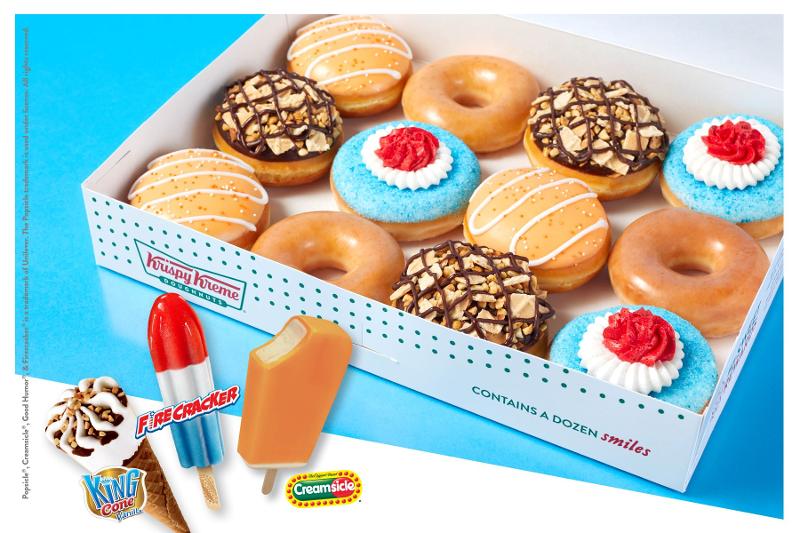 The new creations include a glazed doughnut inspired by Popsicle’s Firecracker, which is dipped in blue raspberry sugar and topped with flavored cream.

Another is inspired by Good Humor’s vanilla King Cone. The doughnut is filled with vanilla custard and dipped in chocolate icing, topped with sugar cone pieces and chopped peanuts, and drizzled with chocolate icing.

The last one takes a page from Good Humor’s famed Creamsicle and is filled with vanilla custard, topped with two kinds of icing and finished with mini sprinkles.

Krispy Kreme also launched a new Creamsicle-inspired Chiller, a frozen beverage made with a frappe base and orange flavoring.

These items are available for a limited time at participating shops.

“Should a doughnut really taste like a Creamsicle? Yes. Yes it should,” said Dave Skena, global chief brand Officer for Krispy Kreme, in a statement. “And we didn’t stop there as we doughnutized some of America’s favorite frozen treats this summer.”

These ice cream-inspired doughnuts come at a time of aggressive marketing pushes by Krispy Kreme. To celebrate the company’s 85th anniversary, the chain said it would give random customers a birthday card to redeem for one dozen glazed doughnuts each month through next June. Additionally, the company recently launched doughnut-inspired ice cream with its Original Glazed Soft Serve.

The company said that these attention-grabbing products, including its Twix-stuffed doughnut, often generate sales.