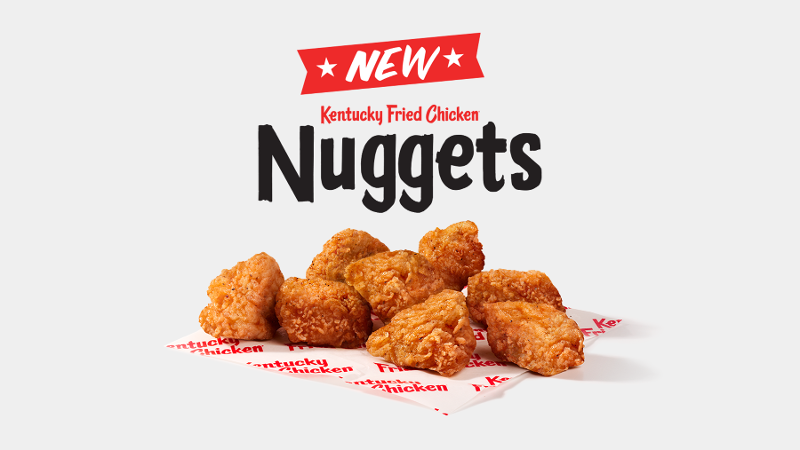 KFC will start testing chicken nuggets in Charlotte this week./Image courtesy of KFC.

KFC is putting its Original Recipe chicken into nugget form.

On Monday, the Louisville, Ky.-based chicken chain said it is testing Kentucky Fried Chicken Nuggets in select locations in Charlotte for a limited time.

The nuggets are made with white meat and are hand-breaded with its “11 herbs and spices” recipe. The nuggets will come in serving sizes of eight, 12 and 36 and start at $3.49. They also come with a sauce, including KFC sauce, Honey BBQ, Classic Ranch or Honey Mustard.

KFC is banking on the nuggets providing it with a legitimate successor to its chicken sandwich, which generated strong sales after it was introduced systemwide early last year. Same-store sales rose 14% in the quarter the sandwich was introduced and 11% the quarter afterward—giving the company its first real successful sandwich introduction, something the chain long wanted.

Nuggets often come next and can give the chain a “snackable” item that plays well with younger consumers. But nuggets have also failed to generate customer enthusiasm among chains that have tried it.

KFC rival Popeyes, for instance, introduced chicken nuggets about this time last year and its sales actually decelerated, likely due to a combination of difficult comparisons and labor challenges.

Still, for KFC the nuggets would add a key element to its menu—it has been decades, at least, since the chain sold nuggets. And given the industry’s shift toward takeout, such a product could prove valuable.

To mark the introduction in Charlotte this week, KFC plans to deliver nuggets to staff at several Atrium Health maternity centers in the city. The nuggets will be available in the Charlotte metropolitan area and surrounding locations such as Concord, Mint Hill, Shelby and Salisbury in North Carolina.