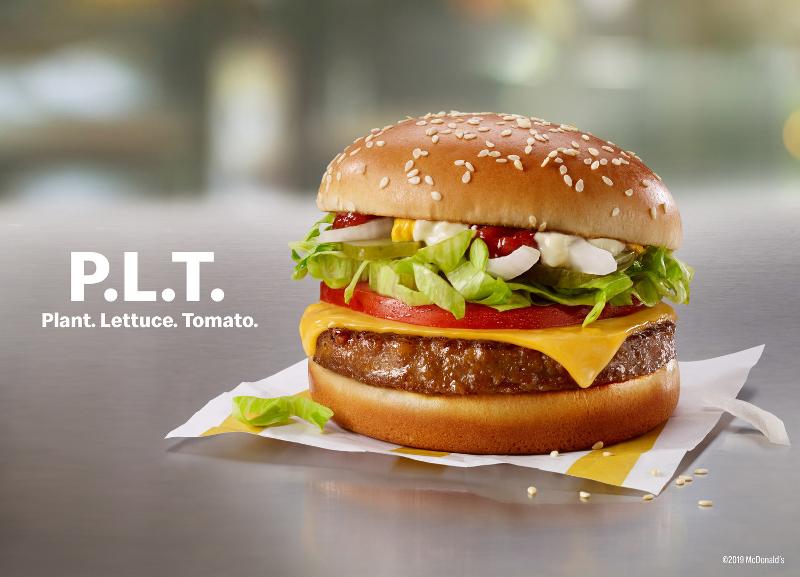 McDonald’s is testing a Beyond Meat burger. In Canada.

The burger giant Thursday announced that it is testing a P.L.T., or “Plant, Lettuce and Tomato,” in 28 locations in Southwestern Ontario starting Monday. The test will run for 12 weeks.

The test is the latest indication that McDonald’s is thinking hard about the current plant-based meat trend, which has taken off at fast-food restaurants in the U.S. Dunkin’ and Subway have tested plant-based meat products, and rivals Burger King and White Castle have both generated strong sales with burgers made from Impossible Foods.

“We’ve got to make sure the consumer trend is sustaining,” McDonald’s CEO Steve Easterbrook said earlier this year. The burger will be priced at C$6.49, or just under $5 U.S.

Ann Wahlgren, McDonald’s vice president of global menu strategy, said the test will allow it to learn about the “real-world implications of serving the P.L.T., including customer demand and impact on restaurant operations.”

McDonald’s has been trying to simplify its operations in recent months to improve speed, and many executives and operators worry that adding a product like a plant-based burger would take valuable grill space and add more complexity inside the restaurants.

Such a test could help the company determine whether demand for the plant-based product is sustainable enough to warrant the added complexity.

The test also represents something of a coup, at least for now, for Beyond Meat, where former McDonald’s CEO Don Thompson sits on the board. News of the test sent stock in Beyond Meat soaring 16% in premarket trading Thursday as investors cheered the potential that the company would be a supplier to the world’s largest restaurant company.