McDonald’s is adding some spice to its Chicken McNuggets.

The Chicago-based burger giant on Tuesday said that it plans to start selling Spicy Chicken McNuggets as part of a group of new menu items for the fall.

It’s the first time the chain has ever sold a spicy version of the iconic nuggets in the U.S., or any other version, in the product’s 37-year history. Chicken McNuggets were first introduced in 1983 and have become one of the chain’s most popular and important products.

The Spicy Chicken McNuggets will be launched on Sept. 16, on the same day that the company will introduce Mighty Hot Sauce, its first new dipping sauce since 2017, along with the Chips Ahoy! McFlurry, a version of the ice cream treat mixed with chunks of Chips Ahoy and caramel topping. The products are limited-time offers.

The Spicy Chicken McNuggets are breaded with tempura coating made of both cayenne and chili peppers. “As our customers have been asking for Spicy McNuggets for some time now, we couldn’t think of a better time to bring them to our menus,” Linda VanGosen, vice president of menu innovation for McDonald’s, said in a statement. 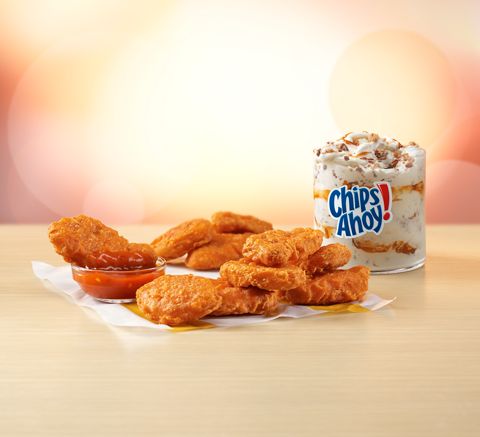 The move is indicative of a shift in consumer habits toward spicier foods, and mounting demand for spicier chicken in particular. That sort of demand has helped generate strong sales growth at Popeyes Louisiana Kitchen, for instance, and spicy versions of chicken sandwiches and other products have grown more popular over time.

McDonald’s, meanwhile, has been looking to build its competitiveness in a chicken market that is booming, as rival Chick-fil-A has soared to become the third largest brand in the U.S., while Popeyes generated record sales after introducing its own sandwich last year.

McDonald’s is developing its own upgraded chicken sandwich. But, by spicing up the nuggets, the chain is using its most iconic chicken product to improve its own competitiveness. CEO Chris Kempczinski told investors in June, for instance, that he believes chicken is a “big opportunity” in the U.S., according to a transcript on the financial services site Sentieo.

The moves also signal that McDonald’s is ready to push new products after largely holding off for months during the pandemic. With fast-food sales now normalized, or even growing over year-ago levels, many chains have started pushing new products and other innovation to get in customers’ good graces.