As protein prices continue to climb, operators are taking a closer look at pasta to help balance food costs. The low-cost but versatile product, long relied on to stretch meat and seafood, is an even more valuable menu asset today. 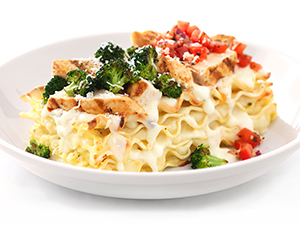 But how to lure patrons to high-margin pasta dishes? Some menu makers are turning to customization to attract the growing number of have-it-my-way guests. “Our salad bar already offers customization, and we wanted to bring that feature  to our grill area,” says chef Tamra Scroggins, director of food culture at the 147-unit Sizzler, based in Mission Viejo, Calif. Millennials, especially, want the option to customize restaurant dishes, according to Sara Monette, director of consumer research at Technomic in Chicago.

To attract that younger customer with a broader selection—and moderate food costs at steak-focused Sizzler—Scroggins introduced a “create-your-own pasta” menu this year. Customers choose a noodle (penne, cavatappi, linguine or fettuccine),  a sauce (Alfredo, marinara or creamy tomato) and a protein or substitute (grilled shrimp, steak, chicken or vegetables). Each selection provides eight ounces of cooked pasta and (except for the vegetables) four to six ounces of protein; prices range from $9.99 to $10.99 with food costs averaging around 25 percent—compared to the mid-30 percent range for meat- or seafood-based entrees.

“High commodity prices for meat make pasta especially attractive for our menu,” says Scroggins, “plus we can cross-utilize proteins and do advance preparation.” The kitchen cooks the pasta ahead to the al dente stage, portions it in small bags and blanches it in a basket of boiling water for one minute before serving. Toppings also are preportioned and sauteed to order with the chosen pasta.

Right now, most guests are eating cold pasta salads from Sizzler’s “endless” salad bar (an additional $2.99-$4.99 with an entree order). Choices include Pepperoni Penne Pasta, Sicilian Pasta Salad and Tri-Color Rotini Salad. But Scroggins is hoping that offering customization will push more guests than the current 5 percent to upgrade to hot pasta as an entree.

Venti Tre Modern Italian, a new fast casual launched by Lexington, Ky.-based Fazoli’s, is all about customization. The two-unit concept offers three platforms to build upon—salads, piadas (Italian flatbread wraps) and pasta—in a Chipotle-style setup; so far, pasta has generated the most orders. “Pasta is easy to customize in a quick-line format and adapts well to mixing and matching shapes, sauces and toppings,” says Jon Quinn, Venti Tre’s vice president of marketing.

Venti Tre, which means “23” in Italian, offers at least 23 add-ons for spaghetti and whole-wheat penne ($6.95) or lasagna ($7.75). Three free sauces are available—pomodoro, parmigiana fonduta and vino blanco—and guests can choose unlimited toppings, such as crispy pancetta, roasted mushrooms, fried capers and sun-dried tomatoes. For an extra $1.75 to $2.25 they can add about three ounces of heartier proteins such as rosemary-garlic steak, Tuscan lemon chicken, meatballs and Italian sausage. The average check is $10.

Venti Tre also offers 12 house specialties ($6.95-$9.20) for guests who would rather not customize. “Servers are trained to coach guests toward these items, as it helps us control food costs by limiting the toppings,” says Rick Petralia, manager of culinary.

Since the opening of its first location in 1995, Broomfield, Colo.-based Noodles & Company has openly encouraged guests to go off the menu to customize pastas and “get creative. We can put together about 120 combinations, including gluten-free options with our new fusilli product,” says Nick Graff, director of culinary and R&D for the 410-unit fast casual.

To keep costs down and the average check at $10, vegetables and noodles are prepped ahead and sauces are made by a supplier partner then shipped out to each location to assure consistency. “When commodity prices go up, we don’t eliminate an ingredient; instead, we may tack on a small surcharge,” says Graff. Today, an add-on of shrimp is at a high $3.34 due to a drop in supply; chicken and meatballs go for $2.39 and steak and pork are $2.69. Graff also specs a precise balance of noodles, protein and sauce to keep costs in line.