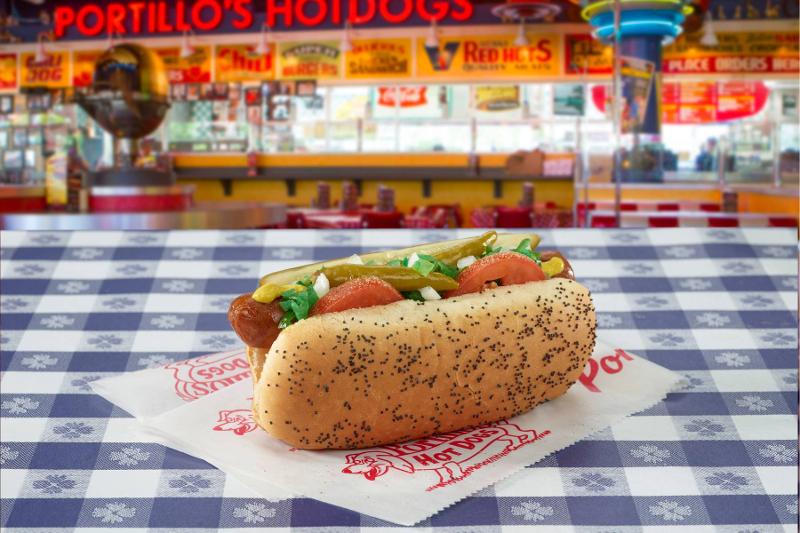 For the first time in its nearly 60-year history, Portillo’s is serving a meatless hot dog.

The plant-based dog is custom-made for Portillo’s by Field Roast and is served with all the Chicago-style hot dog toppings—mustard, relish, chopped onions, tomatoes, celery salt, pickle spear and sport peppers on a steamed poppy seed bun.

The Field Roast Signature Stadium Dog has a pea protein base and is smoked using maple hardwood chips, with a combination of steam and dry heat. The vegan hot dog contains the same amount of protein as most traditional varieties, but it has less sodium and does not include nitrites or GMOs, the company said.

“When we first started thinking about bringing a plant-based hot dog to our menus, we tasted dozens of different versions,” Portillo’s President and CEO Michael Osanloo said in a statement. “It became clear that Field Roast produces the best product on the market.”

Until this product introduction, Portillo’s, a quick-service concept known for hot dogs and Italian beef sandwiches, had few plant-based offerings—and none for the center of the plate.

Restaurants around the country have added more vegetarian and vegan menu items in recent years, especially as meat analogues have grown in popularity as close mimics of animal proteins. Those new menu items have included Burger King’s Impossible Whopper, Impossible Sliders from White Castle, tofu-based Sofritas from Chipotle Mexican Grill and Beyond Chicken Tenders at KFC, just to name a few.

But plant-based menu items have had mixed results at chain restaurants.

Early tests of the McPlant, made with Beyond Meat, are not as strong as McDonald’s anticipated, according to an analyst’s report in March. And brands including Tim Hortons in Canada and Dunkin’ in the U.S. added plant-based offerings to the menu, but eventually dropped them.

Earlier this month, 71-unit Portillo’s, which went public last fall, said it would need to raise prices a significant amount this quarter because of “unprecedented” commodity inflation, particularly in pork, chicken and beef.