“There are a million and one ways to menu  healthy,” says Franklin Becker, chef-owner of The Little Beet in New York City. “It doesn’t have to be one-note or boring.” 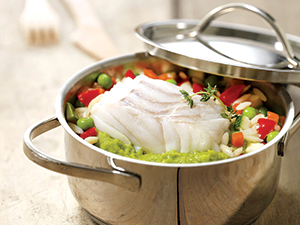 While salads remain the go-to healthy choice—76 percent of consumers order salads with some frequency, according to Chicago researcher Technomic—49 percent would like more varied options.

Becker sees the issue from two perspectives: as both chef and diner. After being diagnosed with Type 2 diabetes at age 27, Becker changed his diet and launched a fast casual that, he says, would “take down the economic wall to healthy eating.” The customizable menu at The Little

Beet’s two locations is designed to give consumers the variety they crave and hit many of the notes they want to hear: it’s all gluten- and GMO-free, sustainably sourced and scratch-made with over 25 vegetarian choices.

In addition to prioritizing clean labels, Becker and some of his fast-casual peers are creating unique packages to deliver healthier options.

Inspired by her son’s multiple food sensitivities, Jeanne Cheng, owner of Kye’s in Santa Monica, Calif., invented the KyeRito—an item that uses leafy greens or seaweed as a wrapper. The signature roll, which sells for $9 to $14, is filled with grass-fed beef, house-smoked wild salmon, tofu or peanut curry. Vegetable add-ons include avocado, broccoli and yams.

Available since Kye’s opening in November, the KyeRitos attract patrons looking for a different kind of portable, handheld option, says Cheng. “We have regulars who come in every day, with about 25 percent following the Paleo diet,” she says.

When it launched its first two U.S. locations in New York City in 2014, Belgian fast casual EXKi (with 78 units in Europe) brought over its menu of tartines, salads, soups—and its signature cocottes. The cocottes, prepared in single-serve pots, each contain four ounces of protein (cod, shrimp or chicken), vegetables, rice and extras such as coconut chips or red-pepper emulsion. “Women are our main customers, so we emphasize lean proteins and smaller portions,” says CEO Laurent Kahn.

Prices for cocottes run $9 to $12. “Since we’re new on the market, we priced our menu similar to other healthy fast casuals,” says Kahn. “But we are making some concessions on margins right now.”

The centerpiece of The Little Beet’s menu is the “Create Your Plate” section, guiding diners to mix and match soups, salads, proteins and sides. It’s these sides that Becker says are the differentiators. They change seasonally and include chef-driven items such as Southwest-Style Millet and Roasted Sweet Potatoes with smoked sea salt and pecorino. The meals are priced from $8 to $15, with a protein and two sides the most popular order. “I want people to eat here more than once a week, and many do because of the wide variety,” Becker says.