Continue to Site >>>
Edit
Companies are getting fancier with their doughnuts, such as the Santa's Bake Shop Collection from Krispy Kreme. / Photo courtesy of Krispy Kreme.

In an August episode of the Restaurant Business podcast "A Deeper Dive," Dave Skena, global chief brand officer for Krispy Kreme, spoke of “doughnutizing” familiar favorites, as with the brand’s summer promotion that reimagined ice-cream-truck classics like Creamiscles in doughnut form.

“Doughnutization” is an apt description of the dynamic that has seen a simple morning coffee-and-doughnut routine evolve into a hotbed of culinary creativity. Business researchers at IBISWorld estimate segment sales in the U.S. at nearly $9 billion in 2022, which represents a substantial jump of 18% over the prior year. This double-digit growth reflects a steady stream of out-of-the-box flavor treatments and menu applications that aim to surprise and delight consumers.

Krispy Kreme continues to up its doughnut-making game with a whole parade of celebratory promotions. For the Halloween-themed Krispy Skremes, flavors like Scaredy Cat and Spooky Spider were merchandised in a haunted-house carton, while the fanciful Mini Thanksgiving Pie Doughnuts were a nifty nod to the standards. The Mini Pumpkin Pie, for example, was dipped in pumpkin-pie-spiced icing and topped with snickerdoodle cookie pieces.  The current Santa’s Bake Shop Collection features festive fancies like Gingerbread Cookie Crumb and Santa Belly Doughnuts presented in a limited-edition box.

And it appears that Birmingham AL.-based Hero Doughnuts and Buns, which is known for its from-scratch, two-day prep process, has been doing its part to make National Oreo Cookie Day a thing; its Cookies & Cream option, a recurring fan favorite, appeared most recently to observe that big day on March 6. 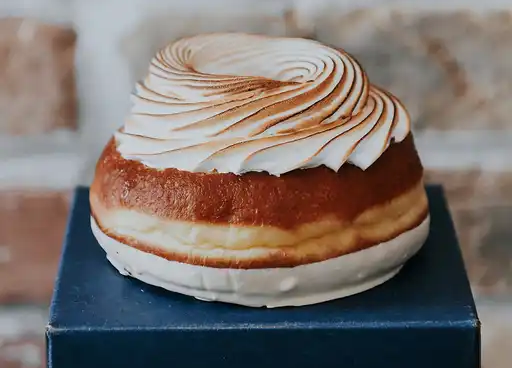 Eight-unit The Salty Donut honors its roots in Florida with Latin-inflected varieties like White Chocolate Tres Leches, combining the signature 24-hour brioche doughnut soaked in a homemade rum-infused, three-milk mixture, bottom crusted with white chocolate and finished with a flourish of torched meringue; then there’s Guava + Cheese, in which the cream-cheese icing is topped with homemade pastelito puff pastry streusel. The chain’s Texas stores offer a clever Churro + Dulce de Leche Star, an appropriately shaped brioche doughnut covered in cinnamon-sugar and filled with whipped dulce de leche. All of the above do a fine job of reflecting the founders’ whimsical corporate motto: “If it ain’t broke, don’t be complacent.”

On a similarly tropical note, Voodoo Doughnuts, founded in Portland, OR, in 2003, boasts of originating the gourmet doughnut category and offers 50 artisanal choices, among which is the breezy Guava Colada, a raised shell filled with guava jelly, topped with vanilla, flaked coconut and a fun paper umbrella. 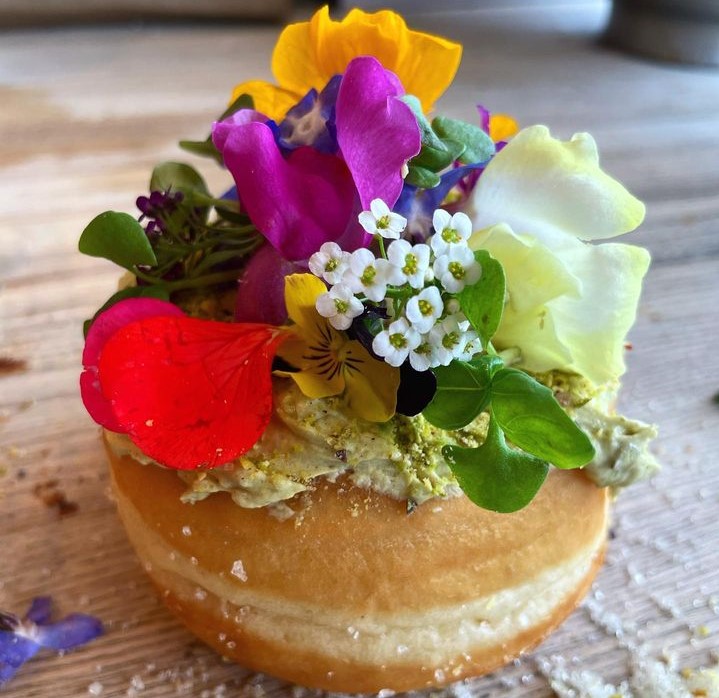 Chicago’s vaunted Doughnut Vault, a chef-driven pioneer in the doughnut renaissance, sparks interest and traffic with daily specials, among which has been a savory-sweet Masala Chai Sunday special. In a similar vein, Fan-Fan’s nifty Ringo Miso is made with miso cider and crowned with a paper-thin apple slice.

Other chefs are going all in on the savory side, as at Atlanta’s Dorian Gray, a newly opened dinner house serving “upscale continental cuisine” like Chef Christian’s Parmesan Doughnuts, an unexpected appetizer that combines sophisticated black-garlic caramel with Belgian stout and bacon.

In fact, chefs frequently use doughnuts as sandwich carriers, like the Krispy Kreme Burger at Cypress Street Pint & Plate in Atlanta, which grills the doughnut; or the Signature Doughnut Sliders from The Original in Denver, which finishes the item with onion jam. Upping the ante, Native Foods, which features a plant-based menu, just launched a December chef’s special. The Glazed and Confused puts plant-based fried chicken, candied jalapeños and plant-based maple butter inside a fresh glazed doughnut bun.

Standard sweet courses in a portable doughnut format have also fueled innovation. Firecakes goes retro with Pineapple Upside Down, Carrot Cake and Peach Cobbler options, while Sublime Doughnuts in Atlanta has built a loyal following with specialties like Red Velvet Cake and S’mores. Nearby Doughnut Dollies promises a taste of home and delivers with Birthday Cake and Apple Fritter Doughnuts. And bonus points for innovative thinking go to Hero Doughnuts for its totally original Bread Pudding Doughnut made from day-old bread soaked in cream, brown sugar and eggs.

IBISWorld reports that the doughnut segment is highly fragmented, with major chains jostling for position among strong regional players and well-positioned local independents. This creates a kind of culinary push-pull and benefits the consumers, who reap the rewards of extraordinary flavor ingenuity and product presentations more typical of high-end patisseries.

The category is also rife with promotional activity, whether it’s Krispy Kreme’s inimitable, time-tested “Hot Now” signage, Doughnut Vault’s Happy Hour that runs daily from noon to 1 PM or the merch on offer at Shipley Do-Nuts, which is expanding rapidly from its base in Houston. The range of handsome logo-ed hoodies, sweatshirts and tees that sport the catchphrase Do-Happy turns patrons into walking billboards.

Speaking of promotions, all eyes are on the surprising alliance between McDonald’s and Krispy Kreme, a marriage of marketing masters announced this fall, in which nine company stores of the former will sell doughnuts provided by the latter. IBISWorld notes that coffee consumption is a leading indicator of doughnut sales, and both brands have pumped up their coffee programs over the past few years. If their partnership succeeds, it could bring the old-fashioned coffee-and-doughnuts ritual full circle from the past to the present.