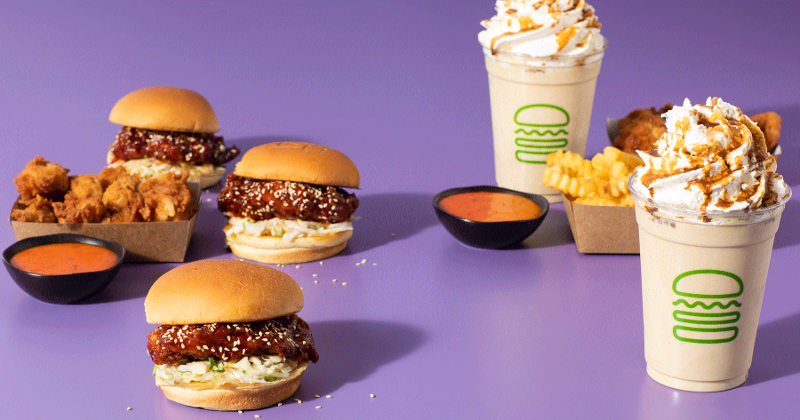 Chief among the new items, which are available until April 5 at all U.S. Shake Shack locations, is Korean-style Fried Chick’n made with crispy chicken breast glazed with Gochujang sauce on top of a white kimchi slaw, topped with toasted sesame seeds, sandwiched on a bun.

Similar flavors are present in the new Korean-style Gochujang Chick’n Bites, which are served with a spicy-sweet Gochujang-mayonnaise sauce.

Shake Shack is also debuting Korean-style Gochujang Fries, which also come with the spicy-sweet mayo, as well as a Black Sugar Vanilla Shake made with vanilla frozen custard blended with black sugar and topped with whipped cream and black sugar syrup.

The Korean-style Fried Chick’n was inspired by a trip the Shake Shack culinary team took to South Korea in 2016 to visit the chain’s first unit there. While touring the neighborhood, a bartender recommended a local Korean fried chicken restaurant to check out, Shake Shack said in a press release.

Shake Shack has frequently riffed on the flavors of its Chick’n Shack sandwich and Chick’n Bites nuggets. In September, the fast casual brought back its Hot Chick’n sandwich for a third time, adding Hot Chick’n Bites and Hot Spicy Fries, all made with guajillo and cayenne pepper.

The chicken items add a high level of operational complexity for the brand. Shake Shack’s chicken is fresh, never frozen, and slow-cooked sous vide-style after soaking in a buttermilk marinade. It’s then dredged and breaded by hand before being fried to order.

Chicken sandwiches, which were surging in popularity pre-pandemic, continue to resonate with consumers. McDonald’s this week announced its plans to debut three upgraded chicken sandwiches on Feb. 24.