“Barbecue is an important part of our heritage—and one of our best-selling menu categories,” says Mike Zajac, senior director of culinary development at Orlando, Fla.-based Hard Rock International. To deliver the most authentic barbecue efficiently and consistently, he recently had large-capacity smokers installed in the chain’s 140 cafes. The first test: a smoked brisket sandwich. 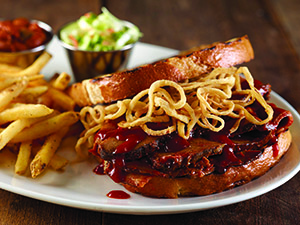 Zajac specs whole, 12- to 14-pound beef briskets, and each cafe goes through six to 12 a day. The smokers are filled with hickory chips to impart flavor. “Once the brisket goes into the smoker, it can be left unattended for 14 hours,” he says. “The low, slow cooking is operationally simple and yields a very tender result.”

Before cooking, the brisket is spiced with a rub made from 10 seasonings, using fresh herbs instead of dried. “We tested over 160 recipes and listened to customer feedback,” says Zajac. Hard Rock also developed the sandwich’s barbecue sauce in-house, using less acidic cider vinegar instead of white vinegar and incorporating molasses and brown sugar to further smooth out the flavor.

After resting exactly 30 minutes, the brisket is sliced thin and stacked loosely to “fluff the sandwich” and make it look more abundant. “The thinner the slices, the greater the perceived value,” says Zajac. “Four to six ounces go on each sandwich, but it looks like eight ounces.”

4. A side of simplicity

A tangle of fried onion straws crowns the meat, adding crisp texture. The sandwich is accompanied by ranch beans and citrus slaw, both made in-house. The sides are simple to execute but have interesting flavor accents that complement but don’t overpower the brisket, says Zajac.

Sliced sourdough was the bread of choice. “It holds up to the brisket’s juiciness and takes well to grill marks,” says Zajac. “Plus, we also use it in our club sandwich.” He tried Hard Rock’s brioche burger bun too, but it wasn’t as cutting edge, he says.

Zajac plans to do more cooking in the smokers. He’s experimenting with hickory-smoked salmon and other seafood to see if these proteins will work well operationally across all locations.