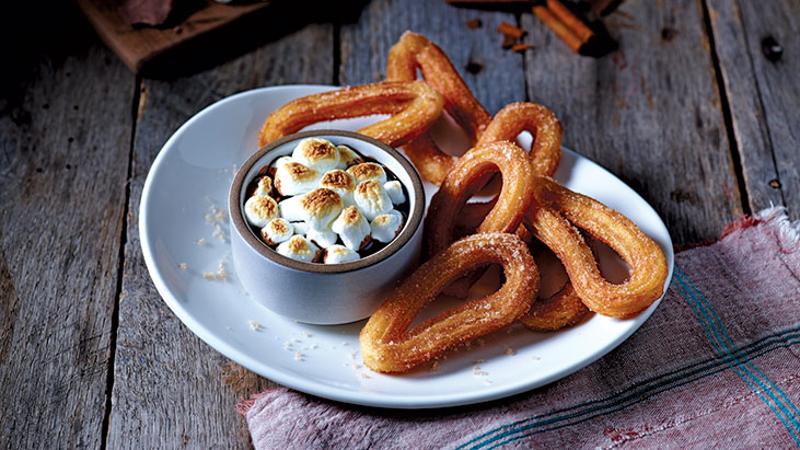 American diners love their sweets. According to Technomic’s 2015 Dessert Consumer Trend Report, 63 percent indulge in dessert at least once a week, and 58 percent of treats are purchased on impulse—often as snacks, as well as the finale to a meal. While brownies and apple pie are perennial favorites, restaurants can build incremental sales by putting new twists on old standbys, says Technomic.

So how to capture that dessert-craving customer when there’s no pastry chef on staff, and the kitchen already is slammed? Some operators are going the speed-scratch route, starting with ready-made components and adding fresh ingredients and flourishes back-of-house to create signature desserts.

On the savory side

Guest feedback revealed that Applebee’s customers gravitate toward  sweet-and-salty flavor combinations and “indulgence in a small bite,” says Cammie Spilyards-Schaefer, VP of culinary and menu strategy. She incorporated these ideas into the chain’s new Salted Caramel Pretzel Bites. The dessert starts with soft pretzel pieces sourced from a supplier; to order, the kitchen adds a drizzle of salted-caramel sauce, then plates the dessert with a two-ingredient maple dip made in-house. The $3.99 dessert not only boosted checks at lunch and dinner, customers also purchased it as a snack, says Spilyards-Schaefer.

Applebee’s noticed an increase in customers ordering sweets during  the happy-hour and late-night dayparts, so the chain added Churro S’mores to the bar-snack section of the menu and saw sales take off. The dessert takes minimal labor and skill to execute. Ready-made churros are heated to order, then kitchen staff dusts them with cinnamon-sugar and toasts marshmallows over a dish of warm chocolate sauce for the presentation.

Applebee’s looks for ways to customize desserts by adding just a couple of ingredients and a few minutes of time, says Spilyards-Schaefer. It’s paying off. Ranging in price from $2.29 to $5.79, desserts are never bundled into meal deals—they all represent incremental sales, she adds.

Comfort with a twist

At New Albany, Ohio-based Bob Evans Farms, breakfast items and dinner entrees are the family-dining chain’s “sweet spot”—not desserts.  “We don’t want to invest in complexity for desserts, since they are not a big contributor to sales,” says David Eisel, senior director of product development and executive chef. “But we do aim for high impact,” he says. Eisel specs pies and cakes from vendors and changes them up with seasonal spins, such as a pumpkin cheesecake with pecans and praline he introduced this fall. The added touches entice customers to purchase  a whole dessert as part of a home-meal replacement package, he says.

Dine-in guests are more apt to order “a sweet hit—a small treat at a low price point,” says Eisel. An example that’s generated dessert and snack sales is the chain’s Cinnamon Blossoms. “Customers order them as a $1 add-on to a meal or to grab-and-go with coffee in the morning or midafternoon,” says Eisel. “We add  new fillings seasonally, menuing apple in the fall and cherry in winter.”

Mini desserts also are top-selling snacks at Sonic, says Mackenize Gibson, senior director of culinary innovation for the QSR. The chain’s Cinnasnacks, which she describes as “inside-out cinnamon rolls in bite-size form,” were introduced as a limited-time offer, and due to their popularity, are now on the permanent menu.

Teaming up for customization

Desserts are the sole focus at Ghirardelli’s 19 cafes, says Cynthia Contreras, special projects manager for restaurant and retail at Ghirardelli Chocolate Company. Customers come in during two peak times—1 to 4 in the afternoon and 7 to 9 at night, spending an average check of $13.

The cafes don’t have ovens, but the company wanted to broaden its ice-cream menu with a baked item.  Guests expect chocolate when they come to the stores, says Contreras, so they decided on  brownies—a consumer favorite, according to Technomic data. Working with a supplier, the chain developed a recipe using Ghirardelli chocolate.