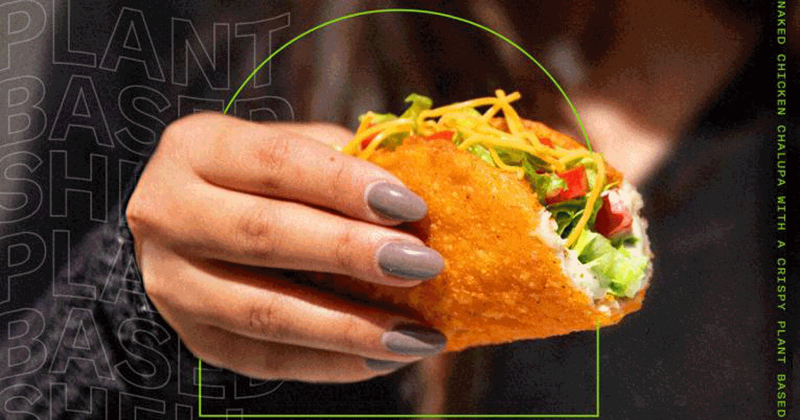 Taco Bell is reinventing its fan-favorite Naked Chicken Chalupa with a plant-based shell.

The new Naked Chalupa with a Crispy Plant-Based Shell swaps in a carrier made from a proprietary pea protein-based blend for the original fried chicken shell. The veggie shell is breaded, shaped into the Chalupa form and crisped to order, then filled with lettuce, cheddar cheese, diced tomatoes and avocado ranch sauce.

The shell is certified vegan by the American Vegetarian Association, and customers can eliminate the cheese and sauce to make the item completely vegan.

The new Chalupa is currently in test in one Taco Bell location in Irvine, Calif. until Sunday. With the test, the QSR is doubling down on its pledge to bring more innovation to the vegetarian space, according to a statement.

Taco Bell tested a vegetarian Cravetarian Taco in April filled with a chickpea and pea blend. The chain also teamed up with Beyond Meat to develop a plant-based protein it intends to use in the future.

“We’ve long been a food disruptor, and this time is no different,” said Liz Matthews, Taco Bell's global chief food innovation officer, in a press release. “Whether someone is craving plant-based protein or crispy chicken or gooey cheesiness, we have something that’s not only flavorful, but also uniquely Taco Bell.”