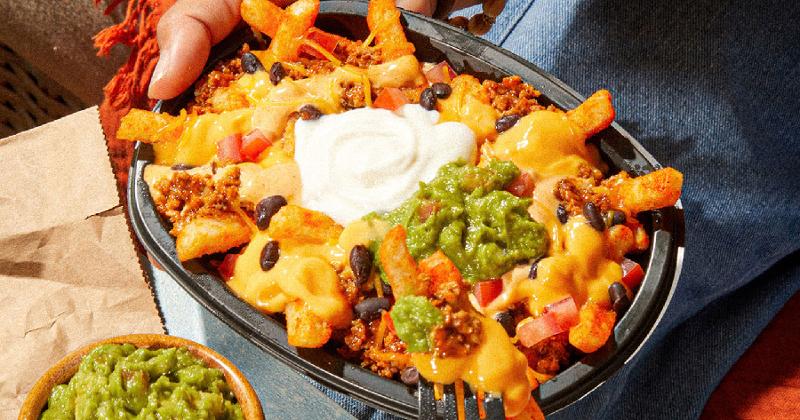 Taco Bell brought back its uber-popular Nacho Fries in October and is now extending their run for a limited time with two new iterations.

Grilled Cheese Nacho Fries take notes from Taco Bell’s Grilled Cheese Burrito. They feature a base of the fries topped with grilled marinated steak, warm nacho cheese sauce and a drizzle of creamy chipotle sauce, finished off with a blend of mozzarella, cheddar and pepper jack cheese. The pile of ingredients is then grilled to melt the cheese and turn it golden brown.

Both LTOs are selling for $3.99 a la carte; guests can also order the 7-layer version in a burrito for $3.79 and the grilled cheese version with beef instead of steak for $3.49. The latter is available in Sacramento stores only.

Coming to menus nationwide for a limited time is the Enchirito—a throwback favorite that is returning for the first time in 10 years.

The saucy Enchirito is made with a flour tortilla filled with seasoned beef, beans and diced onions, rolled up and smothered with Taco Bell’s classic red sauce and topped with melted cheddar.

The Enchirito was pitted against the crunchy Double Decker Taco in a head-to-head competition held in September. Fans voted on their favorite through the app and the Enchirito won. It’s now on the Taco Bell menu from Nov. 17-30 for $3.79.

Original Nacho Fries are still on menus for a limited time nationwide, too, available a la carte for $1.79 or in a Nacho Fries Box for $5.49, which also includes a 5-Layer burrito, crunchy taco and fountain drink. For $7.99, customers can order the Deluxe Cravings Box that includes Nacho Fries, a Steak Chalupa, a Nacho Cheese Doritos Locos Taco and a fountain drink.