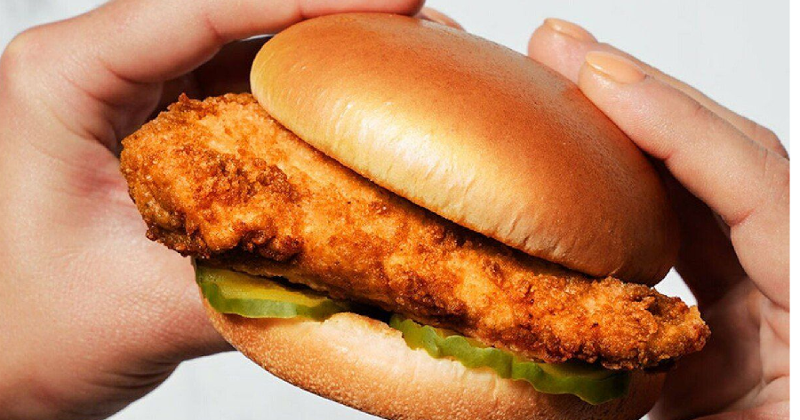 The Original Chick-fil-A Chicken Sandwich was created by the chain's founder, Truett Cathy, in 1964. / Photo courtesy of Chick-fil-A.

Chick-fil-A founder Truett Cathy created the Original Chick-fil-A Chicken Sandwich in 1964, and 59 years later it topped the charts as the most-ordered menu item in 2022. The year before, Chick-fil-A Chicken Nuggets grabbed the No. 1 spot, but they dropped down to No. 2 after a three-year-long reign.

Originally developed as a quick way to prepare chicken for shift workers, Cathy spent years perfecting the sandwich before it was ready for prime time. The perfected recipe for the Original Chick-fil-A Sandwich is locked in a safe, but the chain is not secretive about Cathy’s winning formula.

The chicken breast filet is hand-cut and hand-breaded with proprietary seasonings at each of Chick-fil-A’s 2,800 locations, then pressure-cooked in refined peanut oil, which is free of trans fats and imparts the best flavor.

Extra care goes into the two dill pickle chips that top the chicken. Cucumber slices are soaked for three days to achieve the desired flavor and texture. Both the crispy chicken and pickles are layered on a toasted buttery bun. It's a simple build with very precise steps.

Over the years, the Original Chick-fil-A Chicken Sandwich got some line extensions. In 2010, the Spicy Chicken Sandwich was born. It features the same hand breading and cooking method, but is seasoned with a fiery blend of peppers. Tracking orders in 2022, this spicy sandwich came in right behind Chicken Nuggets, landing in third place.

But Chick-fil-A fans don’t have to wait until lunch or dinner to get their chicken sandwich fix. The Chick-fil-A Chicken Biscuit spotlights the crispy chicken filet on a house-made buttermilk biscuit. It debuted along with the chain’s breakfast menu in 1986 and was joined by the Spicy Chicken Biscuit in 2011.