It wasn’t that long ago that Americans were still pronouncing the final T in Cabernet and didn’t realize it was the major grape in Left Bank Bordeaux. Well, maybe they still don’t know a lot about Bordeaux but they can order a Cab (and Merlot) without stumbling. The chart below offers help on other tongue-twisting varietals. 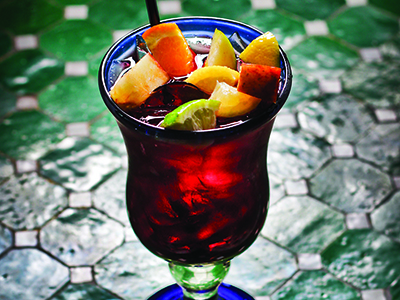 It’s not every day that a drink turns into a world record, but that’s what happened with the signature sangria at Ceviche Tapas Bar & Restaurant.

At the casual chain’s Sangria Fest this June, the six-unit, Tampa, Florida-based Ceviche set the Guinness World Record for the World’s Largest Sangria. Weighing in at 1.2 tons and 1,028 liters, it was comprised of 765 bottles of wine, 130 bottles of brandy, 130 bottles of triple sec, 66 liters of simple syrup and 505 pounds of fruit. Over 700 guests couldn’t drink the giant pitcher dry.

Sangria has been a signature since the concept opened in 1997, first in red and white versions, and then a sparkling cava was added. “We sell over half a million sangrias a year,” says CMO Robin R. Roberts. Tinto and blanco sangrias are  $6 a glass, $16.75 for a small pitcher and $32.50 for a large pitcher; cava is a dollar or two more. Two years ago, Skinny Sangria joined the lineup; it uses artificial sweetener instead of simple syrup and is very popular with women.

Ceviche uses a proprietary label wine in the sangrias, sourced from the Castilla-La Mancha region of Spain; a Tempranillo varietal for red and the Viura grape for white. It’s prepared tableside with a showy presentation. “It’s a great way for servers to entertain guests and get to know their tables, while showing off the signature product,” exclaims Roberts.

Sangria Primera, a top-shelf upgrade, was launched last year; priced at $9 a glass, $21.75 and $42.50 respectively. Primera appeals more to wine aficionados, says Roberts, who appreciate the higher quality vino. Also on the drinks list is a Sangria Martini ($9).

Grape: Tempranillo (tem prah NEE yoh)
The Juice: Most famous as the main component of red Rioja, Tempranillo produces elegant, medium acidity wines with cherry notes.
Terrior: Many other Spanish regions produce wine from Tempranillo; look for it from Navarra and Castilla-La Mancha and Toro (where it’s called Tinta de Toro), and in the Douro in Portugal where it goes by the name Tinta Roriz. Aiming for the U.S. market, many producers display Tempranillo boldly on the label.

Grape: Malbec (MAHL-bek)
The Juice: A Bordeaux blending grape, Malbec adds a rich plummy character and velvety texture.
Terrior: Southwest France, especially Cahors (where the grape is also known as Cot), makes some single varietal wines worth seeking out. Argentina has made this grape its own, producing a range of wines.

Grape: Viognier (vee-own-YAY)
The Juice: This low-acid Rhone varietal is known for its floral bouquet and palate of peach, apricot and tropical fruits.
Terrior: California winemakers have adopted this grape, especially in the Central Coast area. Good examples can be found from Australia, Chile and Argentina.

The Grape: Pecorino (pe-core-ENO)
The Juice: Not to be confused with the cheese of the same name, wine from this grape has an elegant bouquet, good acidity and sometimes a touch of licorice.
Terrior: Pecorino is grown in many regions of Italy, including Liguria, Tuscany, Umbria and Lazio, but the best examples come from Marche and Abruzzo.