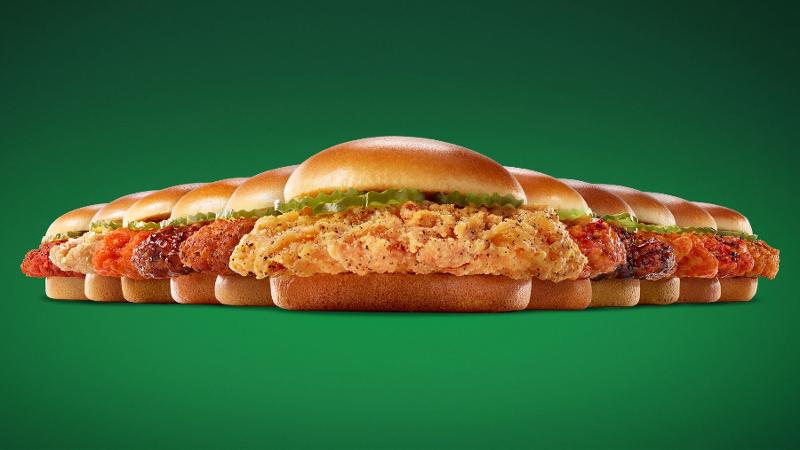 Wingstop, a chain known for its wings and, historically, very little menu innovation, is getting into the chicken sandwich business.

The 1,790-unit chain announced Monday that it’s testing a made-to-order chicken sandwich for a limited time at more than 60 restaurants in Columbus, Ohio; Fresno, Calif.; Las Vegas and Orlando.

Like Wingstop’s wings, the fried chicken sandwich can be tossed in any of the chain’s 11 flavors. It’s served on a toasted bun with pickles. Wingstop’s flavors include Lemon Pepper, Mango Habanero, Spicy Korean and Garlic Parmesan.

“It’s a simplistic take on a complex flavor experience, brought up a notch when dunked in a side of Wingstop’s iconic ranch,” the chain said in a statement.

Popeyes Louisiana Kitchen ignited the chicken sandwich craze in November 2019, when it launched an offering that clogged drive-thrus, quickly sold out, and inspired a host of imitators throughout the pandemic. That sandwich generated record sales for Popeyes at the time, but those sales have since slowed considerably.

Wingstop, which has largely kept its menu simple, did add bone-in and boneless chicken thighs to its menu last year, to help mitigate the pricing volatility in chicken wings.

The chain has declined to give much guidance, however, on the performance of its dark meat.

“We continually are working with the product to ensure that we’ve got it optimized for long-term success,” then-CEO Charlie Morrison told analysts in February. “We've seen the consistent cadence of mix performance in the product since we've launched and then brought it on to the full menu. And it's done its job to help mitigate some of the volatility in wing prices or at least reduce our food cost because the product is actually cheaper to acquire.”

Wingstop has frequently called out its low-labor model, with its sparse, easy-to-execute menu, as a secret of its success. It is too early to tell whether the chicken sandwich will complicate operations and reduce efficiency.

The chain was one of the breakout stars of the pandemic, reporting same-store sales growth of nearly 32% during the second quarter of 2020. Seeing that, chains from Chili’s to Domino’s to Applebee’s started selling chicken wings.

But Morrison abruptly left the chain in March to helm a small fast-casual salad concept, and Wingstop’a stock price has fallen more than 53% so far this year.

Will a chicken sandwich be what Wingstop needs to turn its fortunes around?