It’s never been more competitive in the burger category. Not only are “better burger” concepts proliferating, QSRs and sports grills are upping the ante and casual and fine-dining chefs are serving inspired signatures. So how do you get consumers to choose your burger? 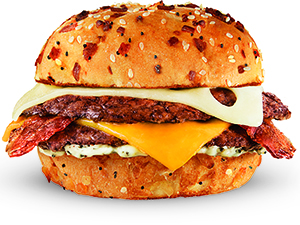 Craveability is key, states Technomic in its 2013 “Burger Consumer Trend Report.” So is the ability to customize. How can you satisfy both these demands and compete with the burger-only places? The answer hinges on variety, quality and a unique extra that differentiates your burger from the one down the block.

Rick Tramonto’s burger legacy goes back to his teenage years, when he flipped burgers at Wendy’s in upstate New York. “I always joke that I went to culinary school at Wendy’s Old-Fashioned Hamburgers. That job had a huge impact on me.” He subsequently honed his skills in a number of renowned kitchens, including Tavern on the Green and Gotham Bar & Grill. His love affair with burgers culminated in the R’evolution Burger—the signature at Restaurant R’evolution, where Tramonto is chef-partner with John Folse.

“I’ve always had a good burger on my menu,” says Tramonto, whose Brasserie T (now closed) won a “Best Burger” award several years back. “My big secret is using an 80-20 blend—80 percent beef and 20 percent fat.” As for the beef, he prefers 40 percent chuck and 40 percent short rib or all chuck.

For the R’evolution menu, Tramonto created a burger that reflects the French Quarter; the restaurant is right on New Orleans’ Bourbon Street. The kitchen grinds the beef in-house and the grilled patty is accompanied by oven-dried tomatoes, arugula, aioli, smoked tomato ketchup, caramelized onions and a fried egg, all layered on a brioche bun. Guests can customize it, too, “since people have great passion and pet peeves when it comes to burgers,” Tramonto says.

It wasn’t necessary for the upscale R’evolution to offer a burger, but Tramonto wanted one on the menu. “I’ve always had great respect for burgers, even when most fine-dining chefs didn’t have that respect. Now every super high-end chef has a signature and many are doing burger concepts.”

Before Richard Satnick opened Dick’s Kitchen three years ago, he wasn’t eating many burgers. “The restaurant—a Paleo diner—came out of my own desire to eat an anti-inflammatory diet. I started learning about grass-fed beef, tried some samples and found it made a difference and really tasted good,” he says. According to Satnick, grass-fed beef has a better balance of essential fatty acids so it generates less inflammation.

Dick’s Kitchen, which now numbers two locations, sources its beef from Oregon’s Carman Ranch, an advocate of restoration agriculture (the top soil is frestored by cattle feeding on grass). For the Classic Burger, the beef is formed into a 5.5-ounce patty and cooked in a cast-iron skillet “to char the burger and retain its juiciness,” says Satnick. “Then we finish it on a griddle and serve it on a slightly undersize bun so you taste the burger first.” The pillowy potato buns are made in-house because Satnick wasn’t satisfied with what was on the market. Lettuce, tomato, red onion and toasted onion aioli complete the build, served with housemade pickles.

Pizza has always been an important focus at this 40-unit chain, which actually goes by the name Boston Pizza in Canada. But a sports bar must menu a burger to avoid the veto vote, says Bill Hancox, VP of Food Services. For the latest addition to the burger lineup, he and his team introduced the Pizzaburger—an LTO that Boston’s in Canada launched with great success.

“This is not a ‘me-too’ item, says Hancox. “It’s a hybrid pizza and burger in one package.” It starts with handmade pizza dough that is layered with Boston’s signature pizza sauce and freshly grated cheese. The dough is folded around an 8-ounce partially cooked Angus beef patty that’s covered with more sauce. Then it’s baked in the oven to brown the crust and cook the burger through.

Corporate chef Lupe Barrera explains the unique cooking process that allows Boston’s to deliver a consistent product chainwide: “The raw patty goes on a hot grill plate that we designed. It runs through the oven for seven minutes, then the partially cooked burger is cooled in the walk-in. Per order, we heat the patty up to 165 F, wrap it in dough and bake it.

Two versions are available—Five Cheese (accounting for 35 percent of orders) and Pepperoni & Bacon (at 65 percent, the more popular choice). “Because we do pizza every day, it opened the door to wrap burgers in pizza dough,” says Hancox. “Now we’re thinking of doing other fillings and a smaller slider format.”

What makes a burger better?