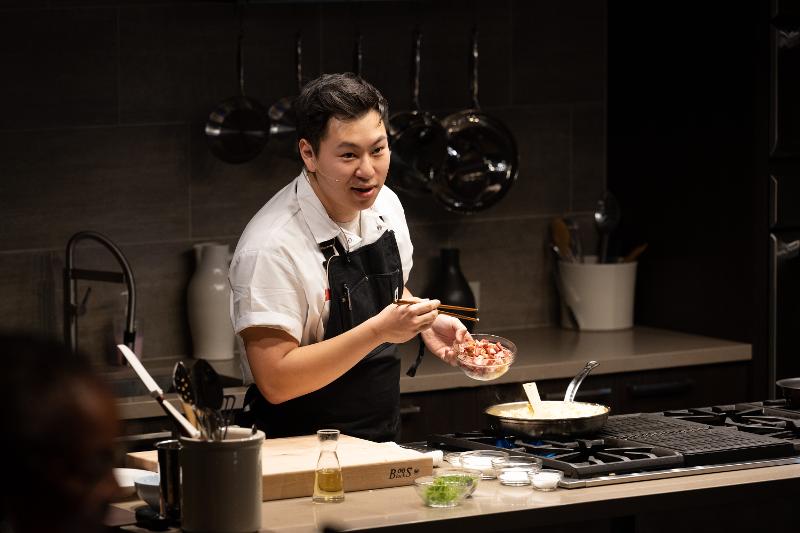 Chef Lucas Sin, owner of Nice Day Chinese and Junzi Kitchen./Photos by Kristen Loken for the Culinary Institute of America.

Nancy Kruse’s monthly column “State of the Plate” is available regularly for Restaurant Business subscribers. Subscribe here to get access to this and other in-depth stories, analysis and opinion.

For 23 years, the Culinary Institute of America’s Worlds of Flavor Conferences have delivered on their promise to recognize culinary excellence wherever it resides. For this year’s edition, it resided in Cities of the Americas: Landscapes of Flavor, a title that acknowledges the post-pandemic trade-off of unfettered globetrotting for hunkered-down domesticity.

Home is where the heart is. The theme of family heritage was a running subtext throughout, as chef after chef presented the foods of their forebears—albeit with some unconventional touches. Chef Aisha Ibrahim, whose family immigrated from the Philippines to West Virginia, is the first woman to run the kitchen at Canlis, Seattle’s James Beard-awarded temple of gastronomy. Her four-course tasting menu features Eggplant Zurita, a childhood favorite cooked by, and named for, her mother. In her rendition, Ibrahim finishes the dish with miso, garlic scape and a dash of caviar, an ingredient that, she noted slyly, doesn’t appear in her mother’s version.

Chef Melissa Araujo asserted that “food is memory,” a proposition she underscored with her soul-soothing Sopa de Mariscos, a seafood soup that is redolent of the fish and shellfish found off the coast of her native Honduras. In fact, Alma, her modern Honduran eatery in New Orleans, is a family affair that features her grandmother’s recipes and employs Araujo’s talented sister as sous chef.

Similarly, Gaby Maeda, executive chef at San Francisco’s State Bird Provisions, shared food memories of her multi-cultural Hawaiian upbringing as she prepared Inari, a deep-fried tofu dish that combines salty, sweet, acidic and umami elements, a childhood favorite that she says has conjured a feeling of comfort during tough times.

Times were truly tough for the German Volga Mennonites, who fled Imperial Russia before putting down roots in Kansas. They’ve maintained a thriving culinary culture there that reflects the disparate influences of Russia, Turkey and other countries that they traversed on their journey to the Corn Belt. Attendees sampled their hearty, stick-to-your-ribs specialties like borscht and vereniki, or pierogies, and bierocks, dough pockets stuffed with beef and cabbage that nod to Turkish boreks. 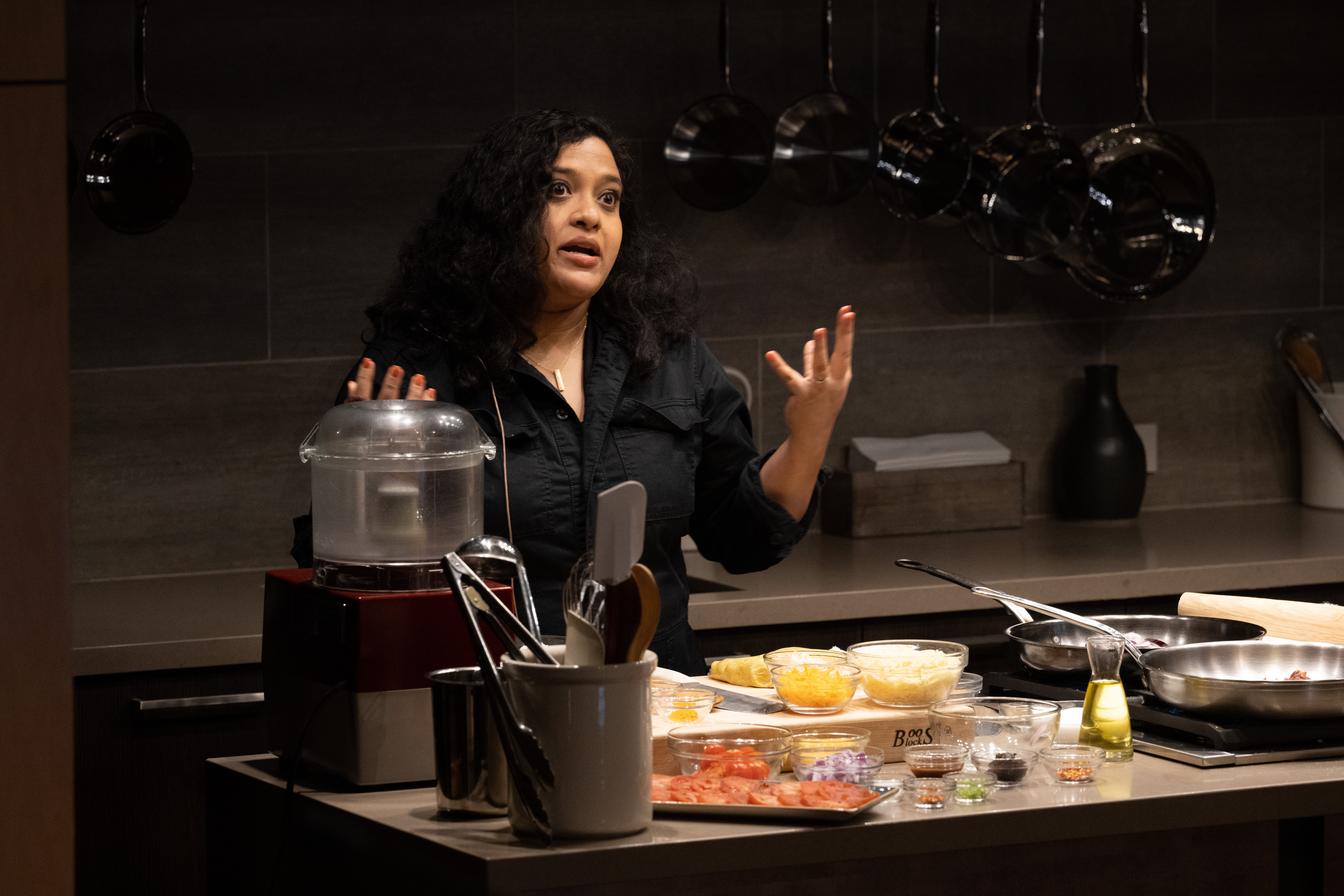 First generation chefs drive the direction of food. At least that’s the contention of Samantha Fore, chef-owner of Tuk Tuk Sri Lankan Bites in Lexington, KY, who advocates the use of familiar vehicles as carriers for authentic ingredients. Her Roasted Curry Tomato Pie, which marries the American produce staple with Sri Lankan pantry staples tamarind and roasted curry powder, landed her on the cover of Food & Wine magazine. It’s a savvy, approachable introduction to an unfamiliar South-Asian cuisine.

The cuisine of Lucas Sin, chef-owner of Nice Day Chinese and Junzi Kitchen restaurants based in New York City, is equally smart and camera-ready. Sin boldly goes where few chefs have gone before: He extolls the virtues and “authenticity” of Chinese-American classics like General Tso’s chicken and of contemporary mashups like cheeseburger egg rolls.

In his opinion, these standard-issue items hit the sweet spot at the intersection of deliciousness and tradition; but one dish that often undershoots that intersection is conventional, commoditized fried rice. So, he goes one better with his Golden Fried Rice, which takes its inspiration from his favorite anime series. The photogenic result, in which egg yolks coat the grains to enhance both color and flavor, made the cover of Bon Appetit. It’s nostalgic but new, he says, and represents the application of Cantonese imperial technique to 21st-century tastes.

It's about evolution, not revolution. While contemporary chefs honor tradition, they are by no means stuck in the mud of convention. In addition to his outside-the-box dishes, Sin sings the praises of the automatic wok, an appliance that replaces labor-intensive, old-fashioned stir-fry cookery with a result that is, he asserts, “no less wok-ian.”

Another thoroughly modern culinarian, chef Parnass Savang is co-owner of Atlanta’s Talat Market, which he describes as a Thai-Georgian operation. Stymied by the time and labor required to open the coconut, an ingredient fundamental to Thai cuisine, Savang sourced a hydraulic press and grater that replace the traditional, hand-cranked coconut crusher and release the prized milk and meat quickly and efficiently.

Michael Beltran, chef-owner of Ariete in Miami, speaks passionately of the need to both preserve and progress culinary heritage. He learned his way around the kitchen from his Cuban grandparents, training which he uses as a jumping off point for riffs like his iconoclastic Miami Bourguignon, a crafty play on the classic that substitutes conch for beef.

And while the Mennonite community also respects the past, it certainly isn’t living in it. Concerned with conserving the land in their adopted Kansas, they’ve developed kernza, a perennial grain that is a highly nutritious first cousin to wheat and addresses critical environmental issues of soil erosion and water conservation. 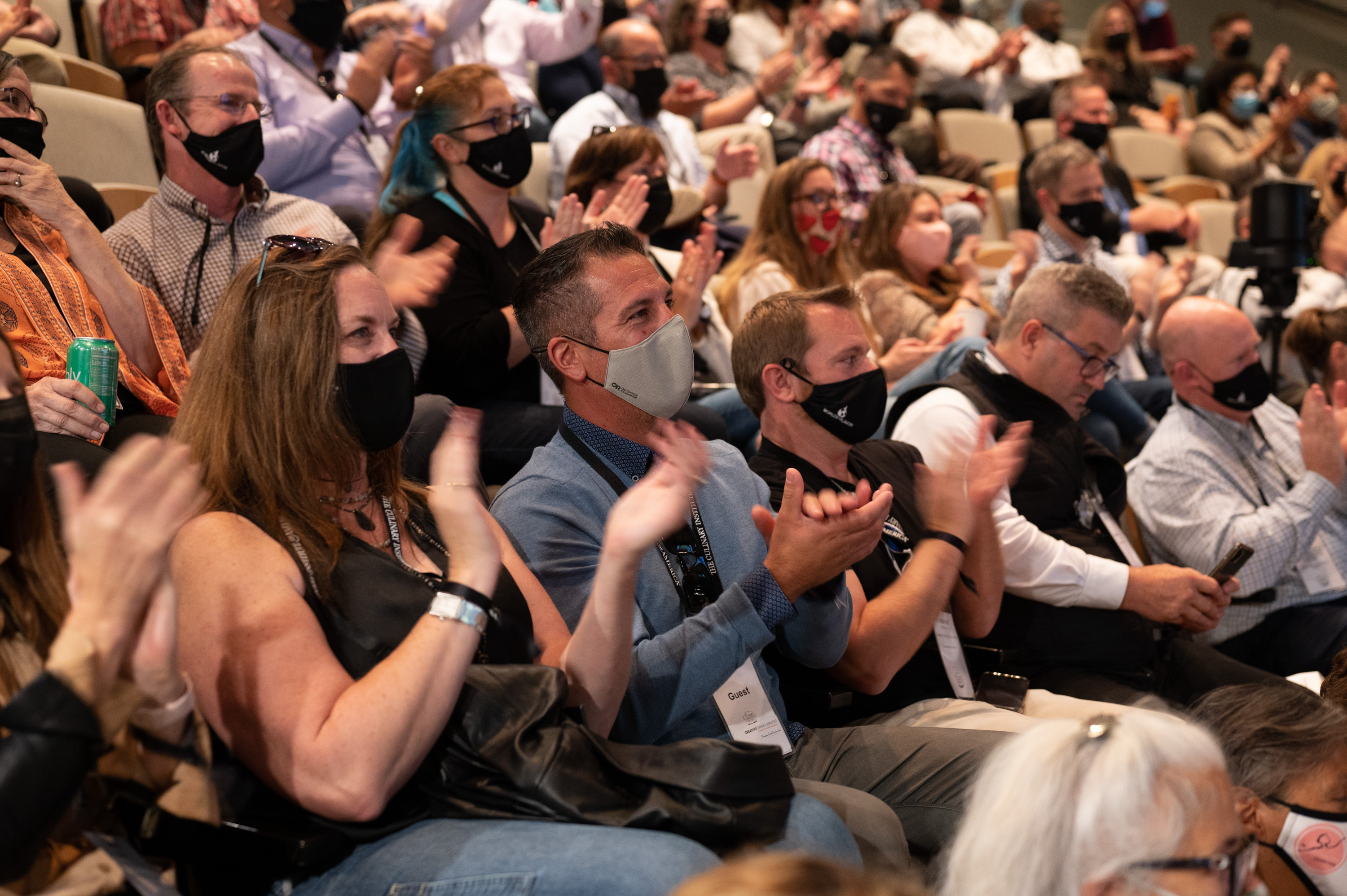 There are implications for all operators. The concept of using a familiar carrier to introduce an unfamiliar global ingredient is one of the oldest tricks in the menu R&D playbook, of course, but Fore’s Sri Lankan example underscores its continuing viability. Nor does there appear to be any end in sight for the comfort food trend, to which some chefs may want to add a global twist, as with the Buffalo chicken fried rice or mapo mac and cheese cited by Sin.

Every Worlds of Flavor program has an “aha moment,” and this year’s came courtesy of chef Carolina Bazan, who is leading the emerging dining scene in Santiago, Chile. Bazan revealed that she nixtamalizes all manner of produce by using the process devised by the Mayans, who soaked their corn in an alkaline solution to free up available nutrients. Bazan explained that she uses an ash-lime bath and applies the technique to tomatoes, pears, apples and more. The produce maintains its shape and is effectively “cooked.” She noted charmingly that this is new in Chile; in fact, it is new to restaurateurs here, too, and provides an unexpected opportunity for chefs to engage, surprise and delight their diners.