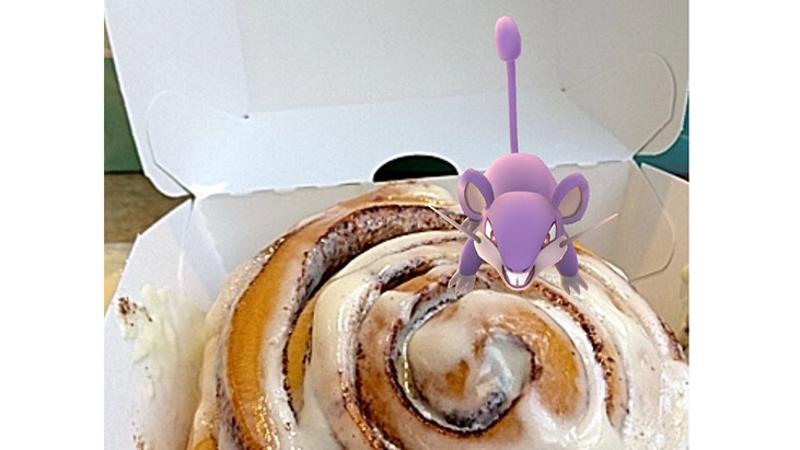 While much of the gaming world has been gripped by augmented reality app Pokemon Go, restaurants are finding ways to take advantage of the game’s popularity and cash in on the craze.

Though some businesses were lucky enough to be chosen as attractions in the popular Nintendo game, others are drawing foot traffic and social media attention by offering specials and paying to be one of app’s player lures.

In the time since Pokemon Go’s U.S. debut on July 7, the game has taken over social media as well as city sidewalks as gamers venture out in a bid to “catch ‘em all,” as prompted by the Pokemon catchphrase. The game is already threatening to beat Twitter’s number of daily active Android users and is now the iPhone app store’s highest-grossing app, according to reports by Forbes.

Some restaurants are situated near areas where players flock to meet—referred to as “gyms” and “Poke Stops” in the Pokemon world—and in some cases, serve as those locations themselves. A Twitter user on Monday revealed that Danny Meyer’s New York City restaurant Maialino was a gym location and tweeted a photo of herself catching a Pokemon in her coffee cup.

excuse me ma'am there's something in my $6 americano pic.twitter.com/aiq5JkLW8v

At Fat Grass, a casual eatery in Bay City, Texas, chef-owner Shawn Watkins was unaware of his restaurant’s gym status until some Pokemon-fan staff brought it to his attention. “One day you’re just a normal restaurant, and the next day, the employees are freaking out about being a gym of some kind,” he says.

Watkins and his employees took advantage of the opportunity and created a $2 kamikaze shot dyed to match the three corresponding teams in the game. “A normal special posted on Facebook might reach 30 people a day,” he says. “We’ve already reached over 800 people with our post about the Pokemon gym.”

Since then, Watkins has noticed more customers coming in to play the game. He says that some people are flocking to his restaurant just to take a selfie outside, noting that “If nothing else, it’s just great exposure.”

Chains are also finding ways to capitalize on the trend, as brands like Cinnabon and Olive Garden are engaging with players on Twitter and, in some cases, retweeting screenshots of users catching Pokemon at their locations. Applebee’s is tweeting at a number of individual Pokemon Go players with a reminder that they can “fuel up” for more play with the chain’s 2 for $20 deal.

And here we were just trying to catch lunch. #PokémonGopic.twitter.com/2Zk3GF55ST

Restaurants without the luck of being chosen as a stop can purchase “lure modules” for a nominal fee (around 99 cents, according to iDigital Times) that attract Pokemon and, thus, Pokemon Go players. An Australian restaurant announced on its Facebook page that it would activate a module daily, enticing its customers not to miss the time slot for their favorite Pokemon.

Other operators are taking a more traditional industry approach: discounting.

CitySen Lounge in Grand Rapids, Mich., is offering a 10% discount to Pokemon Go players on the Mystic team. “It was kind of crazy within the first couple days, but it was fun,” manager Jon Merritt says. “We had groups of guys and girls, young and old and in between saying, ‘Hey, are you guys still doing that discount?’ We’ve had at least five or six people stopping in every day. It was random, and it worked!”

Merritt says he plans to offer the discount for the other two teams in coming weeks to engage more players, and will find other ways to interact with the craze. “We will definitely look into the lure modules and see what we can do,” he says. “You never know.”