When R.J. and Jerrod Melman, sons of Lettuce Entertain You Enterprises founder Richard Melman, were given the chance to create a restaurant of their own, “we wanted the menu to include everything we were eating at the time…tacos, sushi, burgers, you name it,” says R.J. The result is Hub 51, a hip Chicago eatery with cross-cultural food (“everything that’s becoming American”), a lively bar and lots of shareable stuff. It instantly attracted the Gen Y crowd that frequents nightlife-centric Hubbard Street. 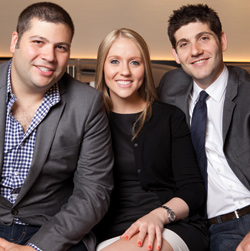 LEYE has had its finger firmly on the pulse of its customers’ collective cravings since 1971. Starting with casual neighborhood joint R.J. Grunts, the company currently operates more than 75 restaurants, successfully blending talented chef partnerships, eclectic food and drink and a touch of whimsy in concepts ranging from fast casual to fine dining. Patrons can dine on everything from Chinese bao buns to tapas, hand-pulled mozzarella, ceviche and crepes, then return for prime steaks and upscale tasting menus paired with wine. “We’ve had the ability to give people what they want almost before they know they want it. You can call it trendsetting. I prefer to call it the ability to listen to people,” Melman has stated.

And he seems to have passed down that same ability to his kids, sons R.J. and Jerrod, ages 33 and 29, respectively, and daughter Molly, 27, who is divisional training manager for their ventures. They are giving their generation what they want to eat and drink at moderate prices in spaces that encourage socialization—without leaving their father’s generation in the dust.

“If Hub 51 didn’t work, we wouldn’t be doing more restaurants,” R.J. notes with a laugh. Last year, they opened Paris Club and are working on a BBQ venue and Tiki Bar, all in Chicago; they also operate Stella Rossa Pizzeria, RPM Italian and M Street Kitchen in California.

Paris Club epitomizes their multi-generational approach. The concept was “reinvented” in the space that formerly housed LEYE’s Brasserie Jo, with a menu that better matches the energy of its Hubbard Street location. “We wanted a chance to do French food in a more energetic way and get younger diners interested in the cuisine. My generation isn’t as adventurous about French as they are about Italian or sushi,” explains R.J.

To begin, iconic dishes like Coq au Vin and Beef Bourgignon were updated and lightened and many are plated for sharing. With the Coq dish, the braised breast is sliced for shareability and presented without a starch or vegetable. Diners can then order up seasonal roasted vegetable platters, pomme frites, wild mushrooms and other sides for the table for an extra $4 to $10.

Appetizers are also designed for sharing and approachability. The chef reinvented classic Croque Monsieur, for example, as Croque Fingers with a béchamel sauce dip—great for sharing and much more elegant, but somewhat familiar to Millennials who grew up on mozzarella sticks. “It’s French comfort food for a younger generation,” says R.J. Other items—such as Lobster Crostini with truffled scrambled egg and Smoked Salmon with avocado on brioche—are pre-portioned for six.

Since Paris Club serves dinner from 4 p.m. until 1 or 2 a.m., the Gen Y diners tend to come on the later side and head to the restaurant’s nightclub upstairs before or after eating. The “older” generations come earlier and if they don’t feel like sharing, there’s plenty on the menu to suit their dining style. It’s simple enough to order a more traditional meal, starting with a Roasted Beet and Goat Cheese Terrine and moving on to Sea Scallops with Lime Beurre Blanc, for example. Average check is $25 without wine or drinks—less than Brasserie Jo but “this place is busier,” reports R.J.

“Success starts with the food. If you’re confident in what you’re preparing…that’s what makes a restaurant tick. Everything else is built around that.”