As a classically trained chef who came up through the ranks of fine dining (Bouley, Charlie Trotter’s, Tru), Bill Kim knows about building flavor and layering techniques to produce a sophisticated result. And as a Korean-American, he grew up with such iconic dishes as bulgogi, the marinated barbecued beef that is probably Korea’s most well-known culinary export. 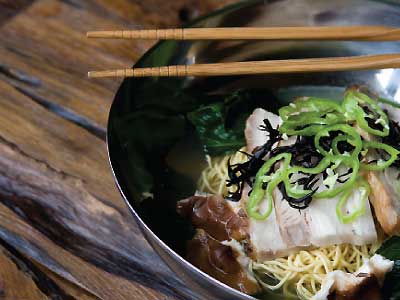 But when Kim opened Urban Belly in Chicago, the first of his long-dreamed-of restaurants serving high-quality, fast casual contemporary Asian food (think Lamb & Brandy Dumplings and Urban Belly Ramen with pork belly, shiitake and pho broth), he also knew enough about how kitchens work to know that his employees might be a little too freewheeling with saucing and salting his recipes.

“Keeping things consistent is one of the hardest things to do in a restaurant kitchen, especially when you’re working with ambitious cooks who might not necessarily come from an Asian food background,” says Kim, who now also owns Belly Shack with his wife, Yvonne Cadiz Kim, and is at work on an Asian barbecue restaurant called Belly Q.

Enter Urban Belly’s premade marinades, which were developed into bench samples with the help of a customer who happened to be an R&D consulting chef, and are now produced with the help of a co-packer. Supplied to the restaurants in one-gallon jugs, the four marinades prevent wayward chefs from fooling with the seasonings and make it possible to keep signature menu items consistent no matter who’s doing the cooking. They are also sold at retail for home use.

Case in point is Urban Belly Seoul Sauce, Kim’s interpretation of a traditional multipurpose soy-and-vinegar-based sauce that his mother used as both a marinade and a dipping sauce. “Korean seasoning almost always starts with salty soy sauce—we don’t use actual salt—diluted with vinegar to balance the saltiness,” explains Kim. Other flavorful liquids might be added for a specific recipe, such as fish sauce or sesame oil, but these two ingredients are ubiquitous.

Kim wanted something a bit different, yet still within the traditional flavor profile. Sugar brought depth, but wasn’t quite right. Rounds of testing brought him to balsamic vinegar: “Fine aged balsamic is tart but sweet, and creates a perfect balance of salt, sweetness and acid in the sauce.” It also solved the problem of excessive caramelization that might be caused by using sugar in a marinade.

Individual recipes are tailored with additional ingredients, including seasonings such as Korean chili paste, Thai basil, kimchi and coriander. But as long as the kitchen follows the rules for marinating—the process starts in the morning for items that can only be used that night and the next day, after which it can only be used for staff meal—Kim gets the flavor profile and tenderness he wants. “It takes continuous training, and a lot of forecasting, to drill this into the kitchen staff,” notes the chef. “But once they get that, they literally can’t mess it up.”

Three other sauces followed, with increasing levels of heat: Belly Fire, a sambal-like hot sauce containing red serranos, sesame oil, chili paste and garlic; the chipotle- and habanero-laced Belly Smoke; and Belly Bomb, featuring the mythically explosive ghost chile. Unlike most hot sauces, which are liquid, the Belly hot sauces have an almost chunky consistency which not only sets them apart, but also makes them more versatile in use, as a marinade ingredient, dressing, dip or table condiment.