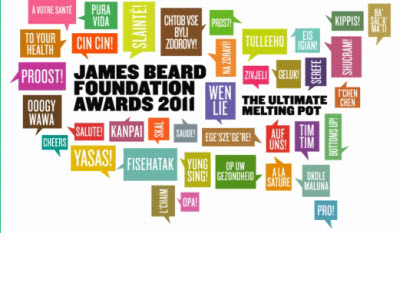 By the time the last award was given 3½ hours later, hungry attendees rushed the reception tables, where chefs from around the country handed out tasting portions of dishes that reflected this year’s theme, “The Ultimate Melting Pot.”

Here are the winners, with comments from many on their win:

Outstanding Restaurant
Eleven Madison Park
New York City
Danny Meyer, Union Square Hospitality Group: “I fell in love with the Madison Park neighborhood after reading The Alienist by Caleb Carr; Delmonico had a restaurant there back in the early 1900s. It became the perfect location for a 4-star restaurant.”

Outstanding Chef Award
Jose Andres
minibar
Washington, DC
Jose Andres: “America welcomed me with open arms when I came here 21 years ago. I thank America and I thank Ferran Adria for inspiring me…Food is the most powerful thing we have in the 21st century. We have the responsibility to make sure that not only our great nation, but the world will always be better by using food in the right way.”

Outstanding Service
Per Se
New York City
Thomas Keller: “It’s odd for a chef to accept the award for service, but I’m grateful to be standing here as a chef; to be part of this industry.”

Anthony Rudolph, GM: “I wave the banner for everyone on the team, from the COO to our reservationist and everyone in between.”

Outstanding Pastry Chef
Angela Pinkerton
Eleven Madison Park
New York City
“I thank my parents for letting me pursue my dream of becoming a pastry chef and baker, when they really wondered where and how I would end up.”

Best New Restaurant
ABC Kitchen
New York City
Jean-Georges Vongerichten, chef-owner: “This has been the most amazing experience, creating a restaurant that’s focused on sustainability and local sourcing. I even met the chef [Dan Kluger] at the Union Square Greenmarket shopping together.”

Dan Kluger: “We owe everything to the dishwashers, runners, sous chefs, line cooks, GM and the whole ABC team.”

Best Chef: Northeast (CT, MA, ME, NH, NY State, RI, VT)
Tony Maws
Craigie On Main
Cambridge, MA
“We opened in a basement and everyone predicted that no customers would be able to find us. I did my own dishwashing. We finally moved two years ago to a location with a storefront. It’s pretty amazing that we’re standing here now…but there are no losers tonight among my fellow nominees.”

Best Chef: Northwest (AK, ID, MT, OR, WA, WY)
Andy Ricker
Pok Pok
Portland, OR
“This award goes to the cooks of Northern Thailand who created the food—we just provide the channel for these great dishes. And we’re lucky that the city of Portland allows restaurants to do what we do.”

Best Chef: Pacific (CA, HI)
Michael Tusk
Quince
San Francisco, CA
“I want to thank my GM, who is wearing a great dress tonight. Any single guys out there?”

"The city of New Orleans really makes it happen…with their constant support of restaurants and chefs.”

Best Chef: Southeast (GA, KY, NC, SC, TN, WV)
Andrea Reusing
Lantern
Chapel Hill, NC
“My brother had the guts to open the restaurant with me and remain my friend even after we dissolved our partnership. He deserves a big thank you.”

Tyson Cole
Uchi
Austin, TX
“I started as a dishwasher in a Japanese restaurant. When I asked to learn to make sushi, they finally consented, but hid me in the back of the kitchen because I was a white man.”

Outstanding Wine Service Award
Belinda Chang
The Modern
New York City
“It’s like the greatest thing ever to win an award for pouring glasses of wine for people.”

Humanitarian of the Year
FareStart