When Bill Marriott took the main stage at the Restaurant Leadership Conference the day before his 83rd birthday, everyone from CEOs of the restaurant chains in attendance to staffers at the host hotel—a Marriott showcase property—were focused like lasers on what this industry icon had to say. After all, he’s the epitome of leadership. He took the company his father started as an A&W root beer stand and parlayed it into a force of family dining (Hot Shoppes, Big Boy and Allie’s), foodservice management (Marriott Services and Marriott Host) and of course lodging. Today its global hospitality empire encompasses more than 4,000 properties across the world, including the one where he was sitting, the J.W. Marriott Desert Ridge. 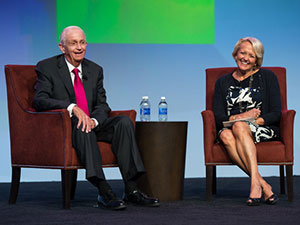 With his daughter, Deborah Marriott Harrison, global officer of culture and business councils for Marriott International, asking the questions, the elder Marriott provided insight on what it takes to run a successful company today. Here are three takeaways:

1. Take care of your people

It sounds simple, but it’s one of the top-down ways of operating that Marriott has instilled in the company. He says it helps keep turnover way down; the average tenure of a general manager at one of the company’s hotels, for example, is 25 years. Long-term employees know the business, and they are loyal to the company and the culture. Plus, it’s more profitable to have less turnover, he said.

This employee-first way of operating resonates even with those who have left the company. When the Q&A session turned to the audience, three different attendees went to the microphone to say they’d worked for Marriott and thanked him for how he ran the company. After that, Harrison asked how many audience members had worked for Marriott at one point in their careers; many hands shot up. And at the end of the session, Marriott received a standing ovation.

2. Adapt with the times

Millennials make up about 60 percent of Marriott’s customer base. And the multibrand hotel company has gone to great lengths to attract and retain this admittedly different group of consumers. When asked by Harrison how millennials are changing the way Marriott does business, his initial response was, “First of all, it’s driving an old man like me crazy!”

But that doesn’t mean the business hasn’t changed. Marriott and his team realized that millennials use hotels differently than their older counterparts—they check in via mobile, go straight to their rooms and throw their clothes on the bed or leave them in a suitcase, then they go to the lobby to either congregate with buddies or work on laptops. In the past, travelers would go up, hang their clothes and work at a desk all night without coming back down.

So Marriott has rejiggered the design of the lobby to make it more inviting and adjusted the design of hotel rooms, since millennials don’t need closets or a desk (those that do work in their rooms sit on the bed with a laptop).

Additionally, Marriott launched hotel brands geared towards millennial preferences, including Edition and Moxy. And the company has overhauled its marketing and advertising to engage millennials in a way the traditional advertising model never has.

It’s a crucial characteristic for any leader to have, said Marriott. He spent less time on this point than others, but it’s a key way he’s led the company nonetheless. “Those who say, ‘I’ve got all the answers’ and don’t list to a team are the ones who don’t stay in leadership positions,” he said. And that dedication to building a good team and listening to them was a common theme from leaders who took the stage throughout the RLC, including Wendy’s CEO Emil Brolick.