In June 1919, at a parade for U.S. doughboys returning from the Great War, innkeeper Roy Allen introduced residents of Northern California to a new sort of thirst quencher. For a nickel, they could indulge in a frosty 10-ounce mug of an herbal refresher Allen brewed from roots, bark, berries and spices. It wasn’t until he was joined three years later by partner Frank Wright that the drink would be christened A&W Root Beer, and the restaurant industry would witness one of its first chains taking hold.

Decades more would pass before a young Dale Mulder pedaled up on his bicycle to an A&W Root Beer stand in Michigan for a 10-cent hot dog and a mug of freshly made soda still priced at a nickel. He had missed the days of families putt-putting up in their flivvers and DeSotos for an affordable treat. But he would witness virtually every key development for the restaurant brand during the next seven decades, first as a customer, then as a food-company salesman servicing the A&W account, and ultimately as someone on the other side of the counter, working as a franchisee.

He would serve as A&W’s president during a crucial period for the chain, and is currently chairman, enthusiastically watching how the 100-year-old operation is preparing itself for its next century—in large part by trying to remain true to its past.

About two years ago, the chain’s 600 U.S. restaurants resumed making their root beer on premise, using sugar and a wooden paddle like the one that stirred the mugful Mulder tipped back as a boy. The chain’s signature product is served once again in a frosty mug like the one Mulder clutched, not the paper cups that crept into use as A&W aged.

It’s not as if the chain is ignoring the present, Mulder stresses. “We got a no-meat burger right now. We were market-testing before Burger King came out with theirs,” he says.

It might not have needed anything more at the time, he says. The restaurants were the only place where the public could buy an A&W root beer—canned and bottled versions wouldn’t hit grocery stores until the 1960s and ’70s.

Nor was A&W vying in the early days with many low-priced restaurants boasting full menus. Recalls Mulder: “We had roughly 100 A&Ws in the state of Michigan. McDonald’s had just started, Burger King wasn’t there, and Wendy,” the inspiration for the burger chain of the same name, “wasn’t born yet.”

With the market all to itself, A&W could deliver a potent message to prospective franchisees as well as consumers. Operators were enticed with the promise of only having to work half the year, since A&W was a warm weather concept.

“The pitch was you could work six months to make as much as you would in 12 months otherwise,” recalls Mulder. “When winter hit, you were done. Happily so. There was enough profit in the root beer that you could make a 12-month living.”

The chain would grow steadily, with a concentration of stores in California, Michigan and Wisconsin. But change, internal and external, would catch up with the brand in the late 1960s. 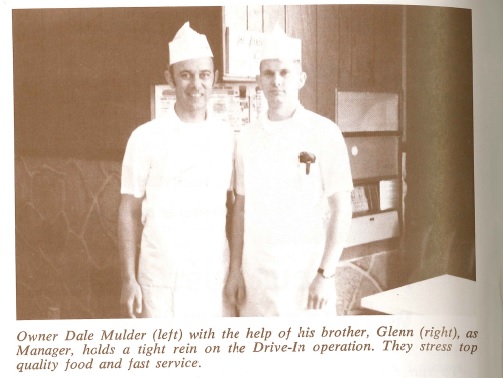 The brand’s success attracted the attention of United Brands, the megacorporation best known as the parent of Chiquita bananas. It bought the rights to A&W and started tinkering with the business model.

“One of the things they did relatively soon was move into cans and bottles,” says Mulder.  “They wanted to go into the retail business.”

The new brand parent also wanted to go into a more traditional mode of franchising. At the time, A&W’s home office made its money by levying a surcharge on the cases of root beer syrup that were sold to franchisees. United Brands wanted to drop that model in favor of a 2% royalty fee.

Franchisees revolted. “We didn’t know what a royalty was,” recalls Mulder. Plus, a percentage of sales wasn’t what they contractually agreed to pay. The operators sued United Brands, igniting a conflict that would flash on and off for years.

United Brands cooled tempers by tweaking its program and showing the operators that the 2% royalty would eat less of their operating profit than the per-case surcharge did. The legal conflicts disappeared.

But that didn’t deflect the other business pressures that rank-and-file operators were feeling, largely from a maturation of the restaurant business. In the 1970s and early ’80s, McDonald’s and Burger King were growing at a head-turning clip, and “Wendy’s started showing its cute little redhead’s face,” says Mulder.

Those challengers not only provided customers with other options but also amplified their pitches through advertising and other sophisticated marketing efforts. “The biggest promotion we had in my 20 years in the A&W system was the Gallon Club,” whereby patrons who bought 10 gallon jugs of root beer were given an 11th gallon for free, recalls Mulder. “We didn’t advertise. We didn’t even know what that meant.

“When I look back at it now, a lot of our guys weren’t prepared for running a larger business,” he continues. “The majority of our franchisees were mom and pops, not sophisticated business people.” Typically, a husband and wife team ran a single store, from opening through closing. If additional labor was needed, it might come from their children.

“But having said that, it wasn’t the way to build a big national chain. We kind of got lost in that and didn’t pay attention to building new restaurants and what was going on around us. Our competition kind of outraced us.”

The brand’s leadership goaded the operators to catch up by adding dining rooms and menu items, in part so units could stay open yearround. Among the options added was a four-size line of burgers: Papa Burger, Mama Burger, Teen Burger and Baby Burger. Mulder’s contribution was the Bacon Cheeseburger, which A&W says was the industry’s first.

The initiatives weren’t always brilliantly executed, Mulder recalls. “We were building restaurants and putting on these pagoda-style roofs that looked Chinese.”

Still, “the ones who didn’t make the changes are the ones who aren’t with us today,” he says.

The brand would go through a series of owners and executive leaders. Al Taubman, a high-profile businessman on United Brand’s board, bought the concept and installed Howard Berkowitz, a prominent figure in the restaurant business at the time, as president. Mulder himself was subsequently hired as president, serving for seven years.

The brand was showing its age by the time it was sold to Yorkshire Global Restaurants, the company run by former Burger King marketing executive Sid Feltenstein.  He would also buy Long John Silver’s and polish up both brands before selling them as a package for $320 million to what is now Yum Brands. The buyer, the parent of Taco Bell, KFC and Pizza Hut, was looking for concepts that could be co-branded with its current holdings. Several hundred combo stores were opened during the 12 years that Yum owned A&W.

“It was a trying nine years,” says Mulder. “We did our best, and they did their best, but it just wasn’t a good fit.”

Co-branding might have looked good on paper, but “the consumer just didn’t buy into it,” he says. “They didn’t see an A&W-KFC co-branded store as being the same as a free-standing A&W restaurant.” Nor were franchisees thrilled with the dual operations. “The chicken guys didn’t want to stop and make a $1 burger instead of selling a bucket of chicken for $10.”

In early 2011, Yum decided to throw in the napkin and sell off A&W and Long John’s. Mulder reached out to A&W’s Asian franchisee and the U.S. franchise community to buy the chain. “Now we control our own destiny,” he says.

The first call Mulder remembers making as he put together the buying group was to Kevin Bazner, a former executive of A&W who had stayed in business with Feltenstein. He agreed to come aboard as CEO, with the mission of recapturing the brand’s former glory.

“He’s done a fabulous job for us,” Mulder says. “We’re back in a growth mode. We have 16 or 17 restaurants under development.”

Yet new issues have presented themselves. Families are still the foundation of the A&W system, but younger generations aren’t always eager to follow their parents and grandparents into the business. Fellow franchisees are stepping forward to buy the units, raising the prospects of a few operators controlling a disproportionate piece of the chain.

“It’s hard to keep that family orientation,” says Mulder. “As these guys get bigger and they become multiunit operators, that’s an issue.”

But he doesn’t worry about the fate of his 15 stores. “I have four children. and they’re all in the business,” he says.