Romeo and Juliet, John and Yoko, Kanye and Kim—their love is a feeble sigh compared to the heart-thumping romance consumers have with Papa Murphy’s Take ‘N’ Bake Pizza, chosen the favorite chain of 2014 (see page 74). And 2013. And the year before that, too. 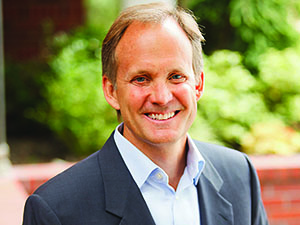 The reign as America’s favorite didn’t happen through intuition or gut, says CEO Ken Calwell, the marketing vet charged since June 2011 with keeping the relationship hot. Two minutes on a call with the former Wendy’s CMO, no listener would doubt it.

Marketers with a seat-of-the-pants style have a yin to their yang in Calwell, who tends to explain the inner workings of Papa Murphy’s through enumerated lists. Three Pillars of the Culture. Five Core Values. He starts with Four Reasons Papa Murphy’s is America’s Favorite: taste, quality, value and an emotional connection. Ask how he intends to hold onto the title as consumers’ top chain, and true to form, he lists four ways:

1. Keeping the allegiance of harried parents. “Most of our competitors focus on young males,” Calwell says. “We focus on moms and increasingly stay-at-home dads. Our core statement is, ‘Bringing families together through food people love.’”

Research shows that Papa Murphy’s has an advantage in satisfying parents because of its service style, Calwell says. Pizzas are prepared to order and provided uncooked, exclusively for carryout. Parents are instructed on how to bake the pie in their home ovens. “Moms do the baking,” says Calwell. “The emotional value is that they cook it and feed it to the family, instead of depending on a delivery driver. They get credit for that.”

2. Focus on franchisees’ profits, not just sales. Papa Murphy’s unique set-up helps margins, Calwell says. Because pies are sold uncooked, no ovens or warmers are needed. Only fresh ingredients are used, so freezers don’t figure into start-up and utility costs. The footprint doesn’t include seating, since all orders are carried out. That also eliminates the need for delivery drivers, and hours are limited because of the family focus.

Still, a big part of the concept’s appeal is a price that strikes families as a bargain, so a portion of the savings is passed along.

Under Calwell’s direction, headquarters has invested heavily in menu research and development capabilities to keep franchisees’ business growing. The operators are enlisted heavily in product tests, which can run to hundreds of stores. The variables weighed prior to a rollout include payroll expenses, food costs and sales mix, for an overall gauge of potential profit growth, Calwell says.

3. Carefully control expansion. “We have a short list of markets where we’re going,” Calwell says. Offers to open stores outside those targeted areas are constantly posed to headquarters, but the chain prefers to plan its opportunities instead of leaping. With almost a quarter of a century spent in franchised chains, “I’ve seen systems that didn’t operate that way,” he says. He credits his rise through marketing to a commitment to the four steps of establishing a brand: awareness, trial, repeat sales and loyalty. Opening restaurants helter-skelter isn’t on that list.

4. Serve with purpose. “It’s better to serve than to be served,” Calwell says. “It’s the basis of everything we do. At the end of the day, we’re in a customer service business.”

Yet it’s about more than pleasing guests. He also speaks of service in terms of contributing to a greater social good, of helping employees, franchisees and suppliers, along with their communities. Both aspects—serving the guest and serving society—are good business practices, Calwell stresses.

Serving the franchisees makes them more profitable, so they’ll create jobs in their communities and build strong economies, the best environment for sales, he says.

Overriding all lists, Calwell says, is a systemwide focus on the brand’s core values. After joining Papa Murphy’s, he personally drafted those cardinal principles and led the effort to make sure they are understood from the crew level to the c-suite.

He’s set a few core operating rules for himself as well—a code he follows to stay in service to franchisees, and thus their customers. Sure enough, it’s a list of four bullet points, which Calwell ticks off like a baseball announcer going through a lineup:

If all of that should be a little taxing, even to a veteran mountain climber and triathlete like Calwell, he has a one-item list of ways to rekindle his enthusiasm: “Walk into a Papa Murphy’s and start making pizzas,” he says. “It motivates me like crazy.”

1. Any mistake in your past that stands out as a learning experience?
It wasn’t a mistake, it was an experience. In 1982, I was serious about training for triathlons. I was out on my bike one day when a woman fell asleep in her car and hit me head-on. It shattered both my legs, my pelvis, multiple fractures everywhere. I was supposed to lose my left leg. I thought I’d never walk again, never mind run, but I eventually did. The things I learned I apply to everything I do: perseverance, humility, appreciation for life. Because of that accident, I’m a better husband, father, CEO.

2. Is there an experience you can look back at now and laugh about?
When I was at Pizza Hut, I developed a good-for-you pizza, a lower-fat, lower-calorie pizza. I thought this would be huge. It bombed. It never got out of test marketing.

3. What’s the best advice you’ve ever been given?
It goes all the way back to my dad, and it was reinforced by my mentors: First, do what you love. Second, there are things you’ve been given that are strengths or gifts. Be sure you use them on something big that matters.