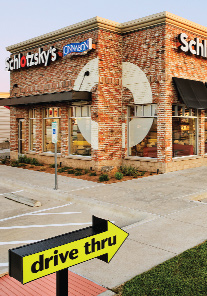 What He’s Done: Veteran of another Austin legend—H-E-B Grocery Company—Kelly Roddy has helped orchestrate Schlotzsky’s return from the brink since being named the chain’s president in 2007. Started as a college-town deli in 1971, Schlotzsky’s had changed hands several times in the 1980s, rocketing to more than 750 units before filing for bankruptcy in 2004. Now, in its 40th-anniversary year, the chain is on track for its sixth straight year of positive comp sales.

Why We Like Him: “A new brand position allows us to filter and evaluate everything we do: ’Lotz better,” says Roddy, 46. “It means that everything we do has to be significantly better than anything else in the category.” Deceptively simple, but effective.

How It’s Worked: Over the course of the past two years, management has strengthened the culture; improved the business model and unit economics; ramped up marketing; and introduced a remodel that has spurred 28 percent sales increases. The chain is also co-branding with sister-company Cinnabon, a move that has improved check averages and brought in new business.

Virtual brands emerge from the shadows

Can ghost kitchens bring restaurants back to life?

Family meal bundles get a boost from curbside pickup

Dave & Buster’s watchers wonder if the chain will declare bankruptcy

Restaurant dining is about to resume in San Francisco