Two for one? Kids eat free? Everybody does that. When Guy Campbell set out to turn around anemic sales on Mondays, he wanted to do something different. He wanted to own Mondays. Kicking around ideas with a fellow franchisee, he came up with a simple, catchy promo that over the past eight years has turned Mondays into his biggest day of the week and Moe’s Southwest Grill into a Monday phenomenon. 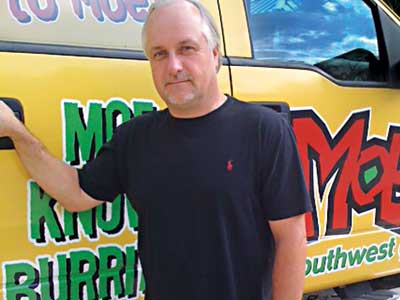 The idea—Moe Monday—has since been adopted by more than 70 percent of the 440-plus-unit Moe’s franchise system. It originated as a simple, flat-rate deal: any burrito, chips and drink for $5. Over the years, Campbell’s taken only two price increases–first to $5.55 and more recently to $5.95–but the deal still averages $4 cheaper than normal menu prices.

“One price, any burrito, no exceptions or disclaimers,” Campbell says. “Exceptions just irritate people. Other franchisees who’ve tried it and not done as well with it are typically those who’ve tried to change it or limit it. The only things we charge extra for are double meat or double queso. Otherwise, it’s whatever they want including special LTO burritos. The last thing we want to do is tell people they can get any burrito except for the special one they came in for. Yes, we do get people who come in only on Mondays. And yes, we do get people who load every single topping on and end up with basketball-sized burritos. But the vast majority doesn’t and we just have fun with it.”

Fun, indeed. Campbell’s stores today sell an average of 650 to 700 burritos every Monday—and that’s just the special deal burritos, which he estimates represent 60 percent of sales that day. Customers line up 70 to 80 deep, and gross sales easily double or triple what’s done on typical Friday nights. In some units, Monday represents 25 to 30 percent of total sales. “It’s become a phenomenon, a real community event,” he says.

Most marketing for Moe Monday has been in-store and grassroots. Banners, flyers, vehicle wraps, ads in high school publications and community papers and tie-ins with Moe’s sponsorships of local sports teams help spread the word. Last year, when Monday sales had leveled off, Campbell turned to radio. “For four months we ran 10 ads over a three-day period—Friday, Saturday and Sunday—twice a month. We’re doing it again this year and from last year’s Mondays to this year’s we’re up 35 percent to 40 percent again.”

He estimates that his Moe’s franchisee co-op—a group that totals 18 stores in the Tampa, Lakeland and Sarasota DMA and that latched onto Moe Monday early—together has spent no more than $15,000 to promote it.

Profits take a hit on Mondays, but Campbell says his overall food costs are consistently among the lowest in the Moe’s system and that the volume makes up the difference. The promo also helps to build traffic on other days. “Moe Monday is how a lot of people get introduced to us,” he says. “I’m not losing money on it, I’m building my market. And what’s the alternative? An empty restaurant on a Monday night? No thanks.”