In his 45 years in the industry, Rich Batley has had the rug pulled out from under him more than once. Early on, he’d worked his way up to top positions at hotel and restaurant companies only to have them closed or sold. Then, after 21 years at a local hotel group where he’d ascended to general manager, a surprise sale again left him out of a job. He was 48, fed up and ready to take control of his destiny. Scanning a trade magazine, he spotted an ad for Ground Round franchises, invested $2 million and built a unit in Neenah, Wisconsin. 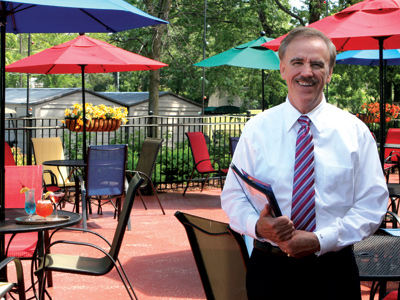 Six months after his grand opening, it happened again. On Friday, Feb. 13, 2004, Batley got word that Ground Round had declared bankruptcy, with corporate stores closing immediately. “I was in the dining room working a busy Friday night,” he recalls. “One of the servers came up to me and said, ‘Rich, did you know Ground Round just went bankrupt?’ I said, ‘I don’t know, but we’re doing pretty good, so let’s keep working.’”

Along with Jack Crawford and others on the Ground Round franchisee advisory board, Batley quickly became a key player on the team of franchisees that banded together to buy the company. Serving on the chain’s board since 2007, he’s become a risk taker, continually working to keep his business and the brand moving forward. He was the first to develop two new stores after the buyout was completed. A third, opening early next year in nearby Oshkosh, Wisconsin, will debut design elements that Batley helped develop.

While his original Neenah restaurant is just eight years old, he’s also moving ahead with a full remodel. “We’ve been developing new prototypes now because we’re starting to grow again and need an updated look,” Batley says. “I’m taking a leap and remodeling early so that we can use our store as a test site for new fabrics, seating, flooring, etc. It will help other owners get a hands-on feel for what the new Ground Round will look like.”

“His efforts have spearheaded our chain to develop a toolkit for designs and options that our other operators can follow,” notes Crawford, who is now president and ceo of Ground Round Independent Operators Cooperative.

In fact, Batley’s Neenah restaurant, which abuts a Best Western Premier hotel that he also franchises, is an ongoing test location for menu and marketing initiatives. “They’re always out front, taking risks and leading the way,” adds Crawford. “And they always follow through with execution and valuable feedback.”

Sales in Neenah have grown steadily, and in late June the unit posted a record week. That’s thanks in part to the success of the restaurant’s Pattie Shack, an outdoor dining area that Batley has turned into a popular stand-alone attraction. “We didn’t just want to call it ‘the patio,’” he says. “We wanted it to have its own name and theme. The menu is the same as inside, but the staff uniforms are distinctive and we have live entertainment. It’s a lot of fun.”

On his role as a pacesetter for Ground Round, Batley says it’s a part he’s happy to play. “We’re always looking for the next thing that can help set us apart,” he says. “Someone has to step forward to keep us moving forward.”