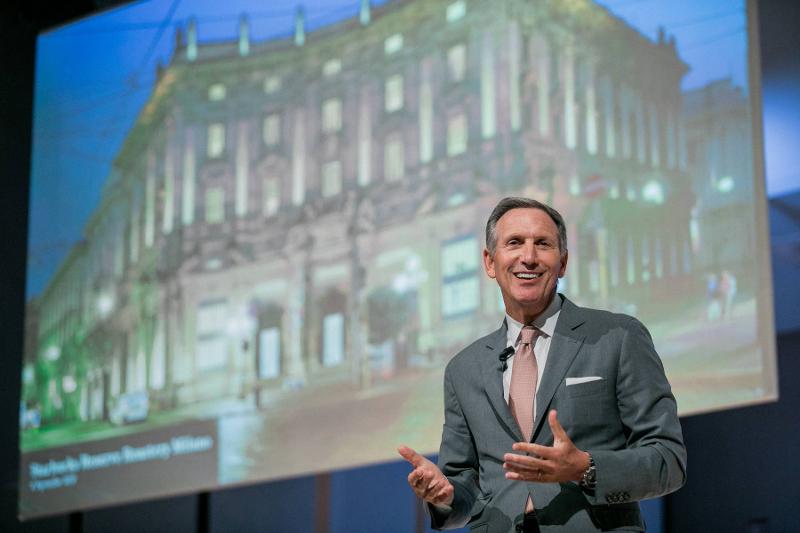 If it seems like a lot of chief executives have changed jobs of late, it’s because they have.

Numerous restaurant companies both public and private have replaced their chief executives, including the nation’s biggest purveyors of chicken wings, coffee and pizza. Some have retired after long careers spanning decades. Others departed for surprising destinations.

Here’s a look at the chains who’ve replaced their chief executives this year.

Howard Schultz comes back to Starbucks

One of the industry’s biggest and best-known brands brought back the man given much of the credit for its success. Kevin Johnson retired as Starbucks CEO. Schultz—whom Johnson replaced—returned to the chain for a second time, though one he insists will not last much longer than 2023.

Schultz coming in as interim CEO comes at a time of contradictions at the chain. Starbucks’ sales are going strong. But it has faced an unrelenting unionization drive that it cannot seem to stop—more than 60 of its restaurants have voted to unionize and a vast majority of votes have been in the union’s favor. Schultz’s response has been to cancel stock buybacks and hold town halls with various employees, then increase pay and benefits at non-union stores.

Domino’s has over the past decade been one of the industry’s most admired companies. But it has hit a rut more recently, thanks largely to a shortage of drivers that appears to be hurting its sales.

Amid this, Allison is retiring, ceding the job to Russell Weiner, long considered a likely CEO for the Ann Arbor, Mich.-based pizza chain. David Brandon, the company’s chairman and its former CEO, will be executive chairman. Their task will be to figure out a way to get sales back in line. After more than a decade of uninterrupted same-store sales growth, the key figure has declined in two of the past three quarters.

Arguably the most surprising departure came from Charlie Morrison, who resigned as Wingstop CEO in March to take the helm of a little-known drive-thru salad chain called Salad and Go.

Morrison led Wingstop for a decade, helped shepherd it through its IPO and made it a rare industry success during the pandemic. President and COO Michael Skipworth took over as CEO of the Dallas-based wing chain. Wingstop had just 533 locations when Morrison became CEO in 2012. It has since grown to more than 1,700 global restaurants.

Skipworth has been with Wingstop since 2014 and has served as EVP, CFO and, most recently, as president and CEO.

Charlie Morrison guided Wingstop through its IPO and incredible growth./Photo courtesy of Wingstop.

Roberts has been CEO and president of Brinker for nearly a decade and has spent a total of 17 years at the Chili’s and Maggiano’s parent. He orchestrated a turnaround at Chili’s during a difficult period for casual dining, and total sales at the chain are up 23% since he took over. The company announced his retirement Monday.

In an unusual move, his replacement atop the full-service company will come from the quick-service sector. Kevin Hochman has spent the past five years as president of KFC’s U.S. business and has been widely credited with helping to overhaul the brand.

The longtime CEO announced his retirement in April after more than a decade in charge. He oversaw a period of steady growth at the 1,640-unit family-dining chain, with total sales up 18% during his tenure, according to Technomic.

At his side during that time was fellow long-hauler Mark Wolfinger, who is retiring as president after 17 years with the company.

Miller will be replaced by Kelli Valade, who resigned from Red Lobster to take the helm of the diner. The executive change marks a new era for the brand, as does this: The company is in the process of making its first acquisition, the 52-unit Keke’s Breakfast Cafe.

One of the industry’s most respected executives, Lee is leaving after seven years atop the Olive Garden parent, saying in December that “this is the right time for this transition.” Darden saw strong growth under his tenure, increasing its total revenues by more than $2 billion and acquiring Cheddar’s Scratch Kitchen.

He’ll be replaced by longtime Darden employee Rick Cardenas, who started with the company as an hourly worker in 1984 and rose all the way to COO. He was tapped as the next chief executive via a unanimous vote by the company’s board.

Dan Accordino retired this year after a 50-year career with the big Burger King franchisee Carrols Restaurant Group, most of that as its CEO.

He was replaced by Pena, a former executive with McDonald’s USA, where he oversaw 800 company-owned locations, worked on remodels, acquisitions and divestitures. Among the openings was the chain’s new location on New York’s Times Square. He takes on a 1,000-unit franchisee, mostly of Burger King, that has been struggling with weak sales and high costs for labor and for food.

Freshii gets some new leadership

Freshii, which operates franchised and company-owned restaurants, as well as a packaged goods retail business, said the leadership change would better allow it to reach its “full omnichannel potential.”

“I want Freshii to have intergenerational relevance for our customers, our team members, our franchise owners and our shareholders, and I believe this vision will be best realized by transitioning responsibility for the day-to-day leadership of the company to Daniel and the incredible team he has today and that he will continue to build around him,” Corrin said n a statement.

Freshii wasn’t the only chain to replace its founder with a more day-to-day CEO. In January, City Barbeque promoted Mike Muldoon president and CEO, following the departure of the chain’s founder, Rick Malir.

The Dublin, Ohio-based chain hired Muldoon in 2019. He came from RMH Franchise Corp., where he’d been the chief executive. Malir said that he was “eager to start this new chapter, both in my life and in the life of the company we’ve been able to build.” He called Muldoon “a terrific fit.”

In March, Howard announced his retirement from the fast-casual Italian chain he had led since 2008.  Doug Bostick, SVP of operations and franchise development, who has been with Fazoli’s for 21 years, was promoted to president of the Lexington, Ky.-based brand.

Howard left Fazoli’s not long after the chain was sold to brand collector Fat Brands, which owns concepts like Twin Peaks, Fatburger, Johnny Rockets and many others. Howard helped stabilize Fazoli’s as the restaurant market struggled during the Great Recession, ultimately guiding it enough that it was sold for $130 million.